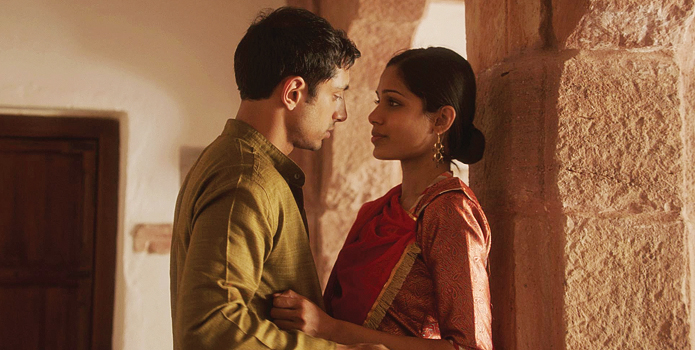 She may barely register in Rise of the Planet of the Apes, but Slumdog Millionaire star Frieda Pinto will get a better chance to shine in the next film from the prolific Michael Winterbottom. Coming off The Killer Inside Me and The Trip, the director is once again changing things up with his drama Trishna.

After starring in Julian Schnabel’s mostly failed Miral, Pinto is back in this adaptation of Thomas Hardy‘s novel Tess of the d’Urbervilles. Also starring Riz Ahmed from Four Lions and Centurion, you can check out our first images above and below for the film premiering at TIFF. Starring Freida Pinto (Slumdog Millionaire) and Riz Ahmed (Centurion) and based on Thomas Hardy‟s novel Tess of the d‟Urbervilles, the film is set in contemporary India and tells the tragic love story between the son of a wealthy property developer and the daughter of a rickshaw driver. Another big event at Toronto is the return of Mary Harron. The American Psycho director hasn’t helmed a film since 2005’s The Notorious Bettie Page, but now she returns with The Moth Diaries. Lily Cole, Sarah Gadon, Sarah Bolger, Judy Parfitt and Scott Speedman star in the horror drama. We now have our first big batch of stills via Rope of Silicon and I’m getting big Carrie vibes. Check out the images below for the film I’m very much looking forward to see at TIFF. Rebecca, haunted by her father’s suicide, begins her junior year at an elite all-girls‟ boarding school, hoping for a fresh start. Her friendship with sunny Lucy is shattered by the arrival of Ernessa, a mysterious girl. As Ernessa consumes more of Lucy’s attention, the latter‟s body grows pale, thin and weak.