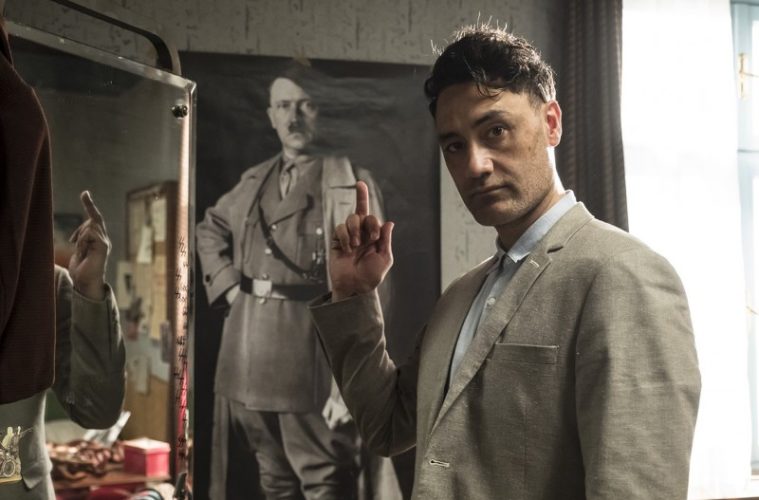 After the release of the widely popular Thor: Ragnarok, it was hard to imagine a Taika Waititi-played character better than Korg (the scene-stealing rock man). But now, after the director’s newest announcement, I think we’ve found a better answer. Taika Waititi will play Hitler in his new anti-war satire, while writing and directing the film as well.

Titled Jojo Rabbit – based off the 2008 novel Caging Skies by Christine Leunens – the film has officially started principal photography, per Waititi’s statement and the first look post as seen in this post. Elaborating on the project, he said (in Waititi fashion), “I’m stoked to begin shooting my anti-war satire. We’ve assembled an incredible cast and I couldn’t be more excited to finally ridicule Nazis and their beliefs. This film is going to piss off a lot of racists and that makes me very happy.”

The aforementioned cast includes Scarlett Johansson, Sam Rockwell, Rebel Wilson, Thomasin McKenzie (we’ll soon know her from this year’s Leave No Trace), and Roman Griffin Davis (who plays the titular Jojo). Described within the same statement, the film tells the story of “an awkward young German boy (Davis) raised by a single mother (Johansson), and whose only ally is his imaginary friend Hitler (Waititi). His naïve patriotism is tested when he meets a young girl (McKenzie) who upends his world views, forcing him to face his biggest fears.”

Considering the flair and authorship present in his previous works (What We Do in the Shadows, Hunt for the Wilderpeople), our enthusiasm for Taika Waititi’s upcoming racist-enraging satire cannot be understated.

Week one down of our anti-fuckface satire, Jojo Rabbit. Can’t wait to share it with the world. Also, what better way to insult Hitler than having him portrayed by a Polynesian Jew?
? #FuckYouShitler @jojorabbitmovie @foxsearchlight pic.twitter.com/bNZ2YlDgaF

Jojo Rabbit will be produced and distributed by Fox Searchlight.