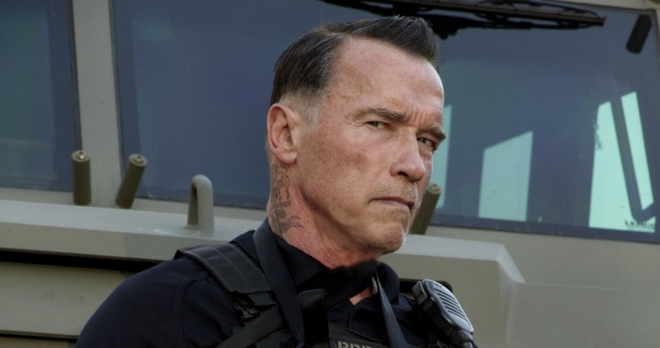 With his cop drama End of Watch having success at the box office and with critics, it didn’t take long for director David Ayer (Street Kings, Harsh Times) to find his next project. Already in production, we’ve got the first image of our main star Arnold Schwarzenegger in the upcoming action thriller Ten.

While the gear he holds is no different than his many other action movies, he’s sporting a slightly different look with his haircut and tattoos. In the film, he’s joined by Sam Worthington, Terrence Howard, Dawn Olivieri, Joe Manganiello, Malin Akerman, Olivia Williams, Mireille Enos, Josh Holloway and Harold Perrineau. Check out the image below, tweeted by Arnie himself, after the official synopsis:

The film follows an elite DEA task force that deals with the world’s deadliest drug cartels. Specializing in complex mobile operations, the team executes a tactical raid on a cartel safe house. What looks to be a typical raid turns out to be an elaborate theft operation, pre-planned by the DEA squad. After hiding millions in stolen cash, the team believes their secret is safe – until someone begins assassinating them one by one.