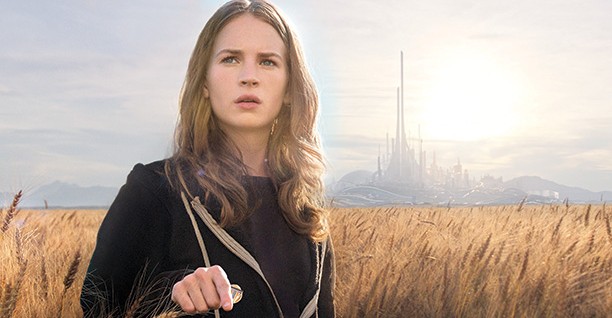 After proving his live-action chops with Mission: Impossible – Ghost Protocol, Brad Bird is heading into original territory for his follow-up, the sci-fi adventure Tomorrowland. Once set to debut this fall, Disney pushed back the George Clooney-led feature to next summer and today we have our first look. Although it’s been shrouded in secrecy, we do know the script comes from Damon Lindelof, Bird, and Jeff Jensen, and new details have emerged as well.

“We begin our movie asking what did [the future] used to be?” Bird says in an interview with EW, who also have debuted the images. “What’s good about the future and what’s scary about it? And we wrestle with those things in a slightly mythical way.” The story centers on Britt Robertson‘s Casey Newtown, a teenager living near Cape Canaveral who comes across a mysterious pin that reveals to her the titular place of wonder (seen below in concept art from Syd Mead). She then connects with Clooney’s Frank Walker, a shut-in, down-and-out inventor who knows what the girl has seen in her visions, thus beginning the adventure.

“I’m a huge fan of Bradbury, Heinlein, Sagan and the great genre writers,” Lindelof says, discussing his influences. “I do think that The Martian Chronicles are part of a bygone age, but the best sci-fi is also evergreen and just as potent today as it was when it was written.” He adds, “Another big influence for Jeff Jensen and I when we first started talking about this story was Close Encounters of the Third Kind.” (Sound familiar?)

He goes on to say, “Somehow it was able to do what no modern movies are able to do, which is tell a story that doesn’t have a bad guy who is trying to blow up the planet, or giant robots fighting, or lots of karate — though who doesn’t love karate? It was so not plot driven. It was just a pure discovery movie. It was pure what-if. Just that idea of what’s going on here? What does this mean? That was a real jumping off place for a movie like this.” We certainly can’t wait to experience the discovery, so as we await a trailer, check out the first images above and below. Bound by a shared destiny, a bright, optimistic teen bursting with scientific curiosity and a former boy-genius inventor jaded by disillusionment embark on a danger-filled mission to unearth the secrets of an enigmatic place somewhere in time and space that exists in their collective memory as Tomorrowland.