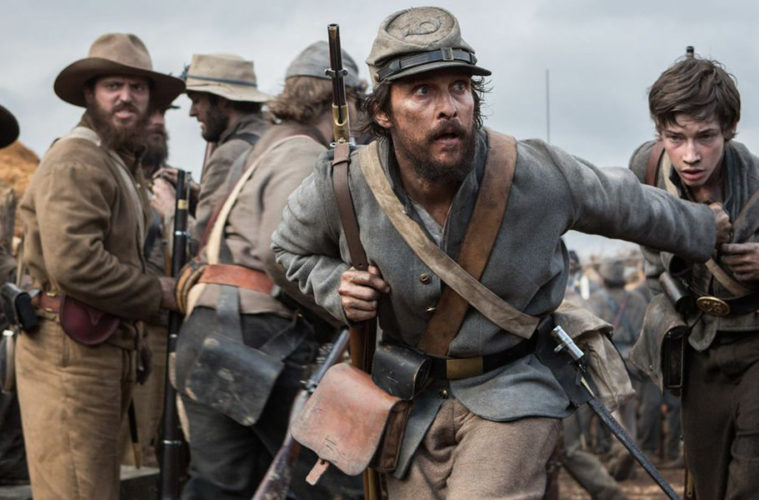 First Images From Matthew McConaughey-Led ‘The Free State of Jones,’ ‘The Secret In Their Eyes’ Remake, and More

While it won’t arrive until over a year from now, today brings our first official image from Gary Ross‘ Civil War drama The Free State of Jones. Led by Matthew McConaughey, seen above, the ensemble also includes Gugu Mbatha-Raw, Keri Russell, and Mahershala Ali. As production officially begins in New Orleans, one can also check out the official synopsis below.

Set during the Civil War, The Free State of Jones tells the story of defiant Southern farmer, Newt Knight, and his extraordinary armed rebellion against the Confederacy. Banding together with other small farmers and with the assistance of local slaves, Knight launched an uprising that led Jones County, Mississippi to secede from the Confederacy, creating a Free State of Jones. His marriage to a former slave, Rachel, and his subsequent establishment of a mixed race community was unique in the post-war South. Knight continued his struggle into Reconstruction, distinguishing him as a compelling, if controversial, figure of defiance long beyond the War.

Also arriving today is our first image from the Hollywood remake of Juan José Campanella‘s Oscar-winning drama The Secret in Their Eyes. Coming from writer-director Billy Ray (Captain Phillips, Breach). Featuring Chiwetel Ejiofor, Nicole Kidman, Julia Roberts, Dean Norris, Michael Kelly and more, check out the synopsis and image below ahead of an October 23rd, 2015 release.

A tight-knit team of rising FBI investigators – Ray (Chiwetel Ejiofor) and Jess (Julia Roberts), along with their District Attorney supervisor Claire (Nicole Kidman) – is suddenly torn apart when they discover that Jess’s teenage daughter has been brutally and inexplicably murdered.

Now, thirteen years later, after obsessively searching every day for the elusive killer, Ray finally uncovers a new lead that he’s certain can permanently resolve the case, nail the vicious murderer, and bring long-desired closure to his team. No one is prepared, however, for the shocking, unspeakable secret that will reveal the enduring, destructive effects of personal vengeance on the human soul.

Interweaving past and present, this deeply layered mystery explores the murky boundaries between justice and revenge, and asks the question: how far would you go to right an unfathomable wrong?

Lastly, we have the first image from Joel Edgerton‘s directorial debut, which is titled The Gift and comes from Whiplash and The Purge producer Jason Blum. Set for a release on July 31st, 2015, the psychological thriller stars Edgerton, Jason Bateman, Rebecca Hall, and David Denman. Considering Edgerton’s experience in front of the camera, we’re greatly looking forward to see what he can do behind one. Check out the image and synopsis below.

Can you really go through life having never wronged anyone? Even if you are unaware of how, or when, and even who you may have wronged… chances are there is someone out there who won’t ever forget it…or you.

Simon (Jason Bateman) and Robyn (Rebecca Hall) are a young married couple whose life is going just as planned until a chance encounter with an acquaintance from Simon’s high school sends their world into a harrowing tailspin. Simon doesn’t recognize Gordo (Joel Edgerton) at first, but after a seemingly coincidental series of encounters proves troubling, a horrifying secret from their past is uncovered after nearly 20 years. As Robyn learns the unsettling truth about what happened between Simon and Gordo, she starts to question: how well do we really know the people closest to us, and are past bygones ever really bygones?