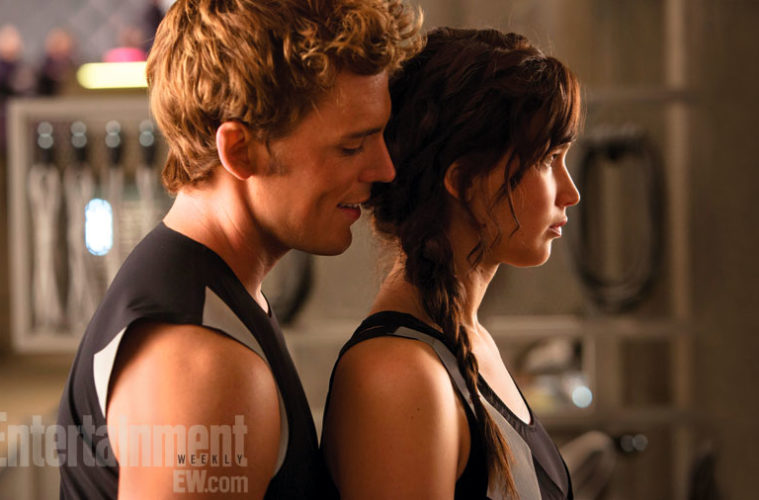 Update: Two new images have surfaced, again at EW (via /Film), showing both Liam Hemsworth and Josh Hutcherson. Both they and the original story can be seen below.

For most moviegoers around this time last year, The Hunger Games was simply yet another film in the spring release calendar, aiming to connect with YA audiences. Consider us surprised when it did exactly that and much more, making over $400 million at the domestic box office (a considerable amount hire then its Twilight brethren). Now, as the follow-up is deep into production, expectations are high for The Hunger Games: Catching Fire and we’ve got our first look at the blockbuster today.

While a reveal of Philip Seymour Hoffman‘s get-up would prove to be the most interesting to yours truly, EW has went the safe route and provided an image of leads Jennifer Lawrence and Sam Claflin together. The latter, a newcomer to the franchise, will play the major role of Finnick. Check it out above, as well as a cover below, for Francis Lawrence‘s film also starring Josh Hutcherson, Liam Hemsworth, Woody Harrelson, Elizabeth Banks, Lenny Kravitz with Stanley Tucci and Donald Sutherland. In the thrilling sequel THE HUNGER GAMES: CATCHING FIRE, Katniss Everdeen and fellow tribute Peeta Mellark have barely returned home after winning the 74th Annual Hunger Games when they are whisked away once again by the Capitol. Forced to leave her family and best friend Gale, Katniss is dispatched on a victory tour of Panem with Peeta, where rebellion is seething in all 12 districts.

The Capitol is enraged and ready to strike back . . . as President Snow prepares the most diabolical edition of the Hunger Games yet. THE HUNGER GAMES: CATCHING FIRE will be directed by Francis Lawrence, and produced by Nina Jacobson’s Color Force in tandem with producer Jon Kilik. The novel on which the film is based is the second in a trilogy that has over 36 million copies in print in the U.S. alone.