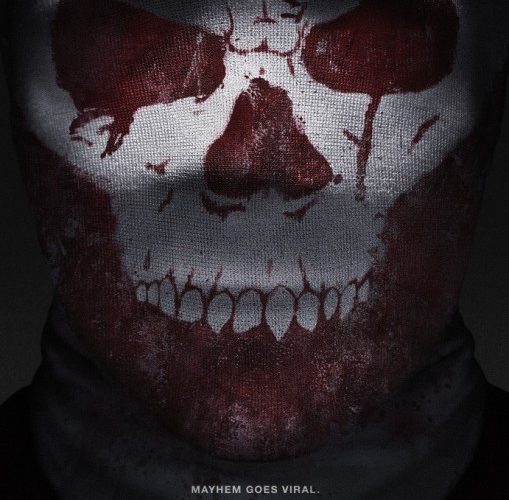 With a seemingly economical and swift production, the first V/H/S was an unexpected hit, and has now spawned two sequels. As short films usual have such a small amount of exposure, the loosely-linked anthology concept is ideal for the genre. It’s challenging to the filmmakers and intriguing for viewers and, for better or worse, we have some interesting ideas at play. For the third film, V/H/S Viral, the “found-footage” emphasis has been mostly dropped via the throughline between them all. Like any franchise, a third outing is difficult to pull off yet, and such is the case here, with few ample rewards to be found.

When it comes to shorts, there isn’t always a ton of meat to them so I’ll keep the surprises vague, but as a whole, this third effort brings mostly mixed examples of where this kind of concept can excel. Certain shorts, like Bonestorm by Justin Benson and Aaron Moorehead, have fun with the nature of the “found-footage” aesthetic by using GoPro cameras mounted onto the helmets of the skateboarding protagonists. They end up in a hellacious mess and as they fight their way out we get a view of their reactions up close and personal. Another stand-out is Parallel Monster by Timecrimes‘ Nacho Vigalondo, which messes with a familiar time-travel trope that ends up going in a very different direction. It smartly uses the handheld cameras in what might have been a distractingly showy fashion in lesser hands. The initial concept of Dante the Great by Gregg Bishop is intriguing, which has fun with a cape that grants its owner magical powers that he utilizes to its full extent. All of the sequences with cool powers in these trio of films, and horror in general, is about twisting what seems like a great benefit, but gives it drastic and often dangerous side effects. It’s a fun way of twisting the knife of wish fulfillment and that’s what Bishop smartly does here — at least initially.

Vicious Circles by Marcel Sarmiento is the aforementioned “wrap-around” film that ties them all together, but it might be the weakest link in the bunch. It’s certainly tough to come up with that kind of structured film because it is broken up into pieces and has a necessity to keep things interesting in chunks. Its elements feel tonally odd to the whole show, particularly a sequence following some Latino gangbangers that is hard to see how it ties into the whole premise. The entire idea of someone filming them chasing after their girlfriend on a bicycle while filming is pretty silly. Then again, most of this is silly fun that wouldn’t survive under scrutiny.

Overall, this is easily the weakest of the three V/H/S anthologies thus far, particularly due to its connecting thread. It’s always a mixed bag trying to make these things, let alone review them, and I can’t imagine everyone will be pleased by all the shorts, but there’s more misses than hits this time around. If you enjoyed the V/H/S franchise to this point, you might find some enjoyment here, but its glaring flaws keep it from ever reaching the heights that the first offering achieved.

V/H/S Viral screened at Fantastic Fest and will be released on October 23rd on VOD and November 21st in theaters. See a new red band trailer above.