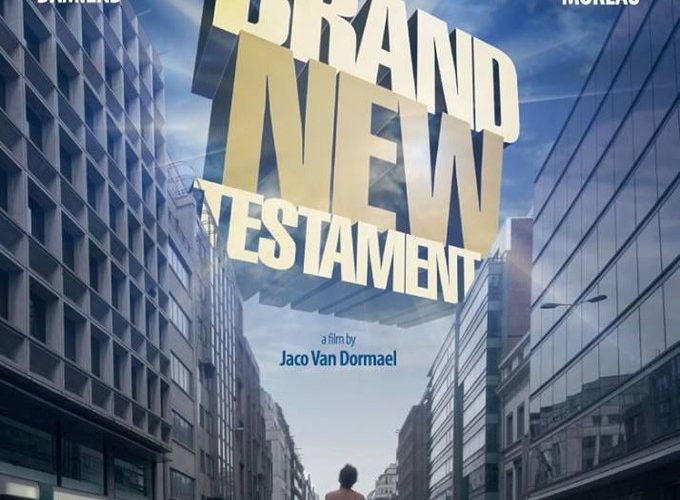 If you were to take the charm and playful visual language of Jean-Pierre Jenuet’s Amelie and pair it with a blistering satire of religious dogma, the end result would look something like The Brand New Testament, a new film from Belgian director Jaco Van Dormael. His previous feature, Mr. Nobody, starring Jared Leto as the last living human on Earth, also showcased a penchant for high concepts that veer towards the absurd rather than the literal. With his latest entry, Dormael is gunning for the big guy himself, God, portraying Him less as an all-powerful deity and more like an irritable grumpy man hellbent on making life miserable for us petty humans. In bringing life to these religious icons, he weaves a rich tapestry of conflicted characters whose unique problems become fodder for a truly holy upheaval of all that we know to be real.

The setup for The Brand New Testament begins with the holy family of the divine father (Man Bites Dog’s Benoit Poelvoorde), his doting wife (Yolande Moreau) and his rebellious daughter, Ea (Pili Groyne) — herself sister to her deceased brother Jesus Christ, whose resurrected spirit resides in a kitschy statue in her bedroom. They live in a compact Brussels apartment with no entrance or exit. Every day, without fail, God sits alone in His dilapidated office and types away on a vintage computer, creating rules of annoyance to plague the Earth He created. Rules such as that when you stand in line at a store, the lines next to you will always move faster until you try to move into them. These cruel jokes on the human condition prompt Ea to do something about all the misery her Father is wrecking, so she decides to hack the all-powerful computer that controls the fate of all lives and send her own divine message — via SMS, of all methods. As the people of Earth check their cellphones, they realize they have been given the precise dates of their inevitable deaths. This creates an existential sea change of attitude, with pursuing your dreams and fulfilling your desires before time is up becoming the new modus operandi. Meanwhile, Ea escapes the divine apartment through a laundry machine wormhole, ending up in the streets of Brussels. Determined to create a “brand-new testament” for the world to live by, Ea sets out to discover new apostles to champion her message of fatalistic love, all while her furious Father attempts to reverse the damage she’s done by chasing her in the real world.

Touching on a wide range of topical issues — from infidelity and rage-induced violence to transgender personal discovery and depression — the apostles are vehicles for Dormael to hammer home his thinly veiled agenda. It also gives the filmmaker a fantastic vehicle to create comedic vignettes about important issues, and an opportunity for the rest of his ensemble cast to showcase their acting prowess. One particular scene-stealer is Catherine Deneuve, who literally goes ape crazy to save her dying marriage. These varied stories of the new apostles coming together with the help of God’s daughter is both charming and amusing, all whilst offering a heavy dose of morality. What we have is ultimately a welcome satire for the modern age that’s no less funny than it is intelligent.

The Brand New Testament screened at Fantastic Fest and opens on December 9, 2016.