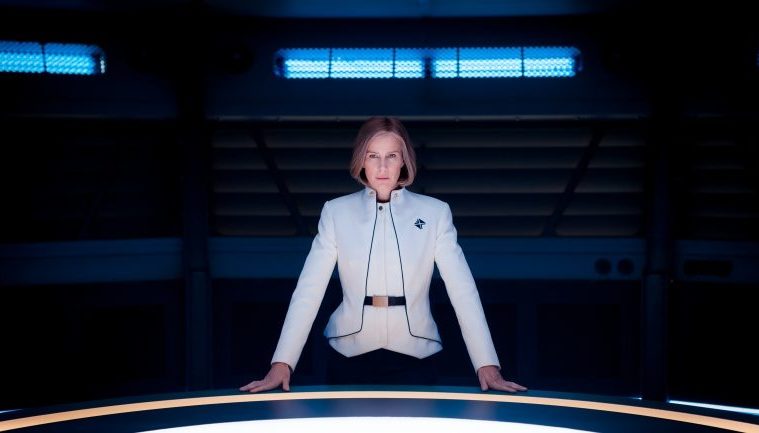 Seemingly from outer space (Australia, really) comes Science Fiction Volume One: The Osiris Child. This lost ’80s era space opera is a fresh of breath air that comes at a time when one doesn’t see this kind of film too often. Furthermore, it’s not of the post-apocalyptic variety, which also adds a refreshing angle. What starts as a slow build, Shane Abbess‘ ambitious sci-fi gem quickly picks up speed and never looks back.

Abbess’ feature has many strengths, and right out of the gates the visuals simply sing with a slick and refined production design. Abbess and co-writer Brian Cachia succeed at impressive world building, and, like the music (also from Cachia), it’s big. This story about a government conglomerate, EXOr, colonizing planets is kicked off when one of their secret facilities is in danger of wiping out an entire planet in 24 hours (which include colonists, and the prison labor camps that build much of it). Also, the prison was a cover for some secret R&D efforts to make terraforming more economical. In short, they created monsters, and those monsters got out. Bad, meet worse.

This makes for an intriguing start and once we start to meet the characters, and see the sets that the team came up with, it’s a future one enjoys spending time in. Well, until these monsters start ravaging the planet’s surface that is. Boiled down to essentials, this is about a disgraced pilot trying to save his daughter from the planet before things go boom… and make up for time he’s never had with her.

Featuring cold corporate personas — who care more about their place in the world than anyone else in it — the drama follows about Lt. Kane Sommerville (Daniel MacPherson) and Sy Lombrok (Kellan Lutz) searching for young Indi Sommerville (Teagan Croft). MacPherson may be the lead (talented, and reminiscent of young Kevin Costner), but it is Lutz who commands much of the film. His character brings an emotional center which manifests itself later on in the narrative, making for an ultimately impacting arc.

It’s a beautiful piece of work with stellar effects and chapter breaks to help with the narrative pacing. While this is small scale sci-fi, the action is visceral, and the editing is incredibly strong. Abbess and Cachia also bring up questions that aren’t often asked in other films in the genre. For instance, a tired trope in which we always see somebody heading to save someone else is tackled different here. Few films ask the question, “What if that person isn’t there?” It makes for a unique thought process that shows how much care was paid to this entire narrative.

Everything from the Bushido-inspired prison guards to the prison’s solitary confinement cells (ingeniously designed, I might add) to even the spoon/fork all make this seem like this endeavor would have cost a quarter of a billion dollars, yet this Australian production most certainly didn’t have a tenth of that. Even side characters like Temuera Morrison‘s Warden Mourdain bring a level of depth and legitimacy and the space junkie dimwits (Isabel Lucas and Luke Ford) also help make this world feel so full, vibrant, and, at times, crazy.

The true strength with this blast of a film is that everything is so unexpected. What starts to come across as uninspired SyFy fare quickly does a 180-degree turn and shows us that Abbess and team have something to say, and more importantly, show. From narration to flashbacks to chapter breaks, Science Fiction Volume One: The Osiris Child just gives and gives, and when it ends — brilliantly, by the way — you’ll be screaming for more, and quickly.

Science Fiction Volume One: The Osiris Child screened at Fantastic Fest 2016 and opens on October 6, 2017.