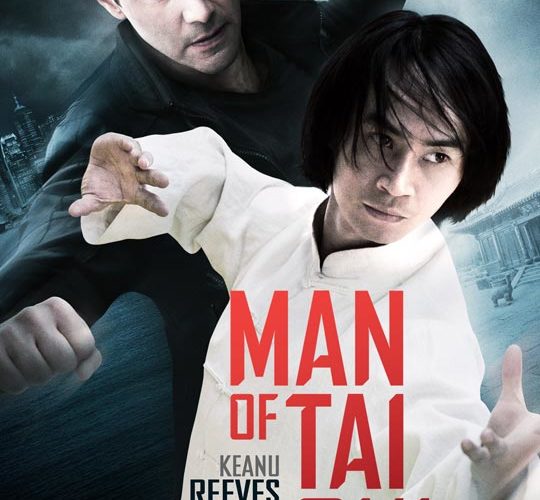 Like a ride straight out of the Hong Kong cinema of yesteryear, Man of Tai Chi is a silly entertainment that, alternately, plays with serious themes in an engaging manner — not that these have much effect when the fights and stunt choreography in Keanu Reeves‘ directorial debut are superb. You’d expect that from legendary fight coordinator Yuen Woo-ping, yet it’s more worthwhile to note that how the actor, nearly fifty, has become even more nimble as years go by. Reeves directs, too, building up a character who, though the ultimate boss you simply don’t want to say no to, is also an embracing of the silly, semi-serious persona much of his career has been built upon; a few lines are so silly and shockingly odd that, instead of detracting, they only add to the mystique of what’s been achieved.

Tiger (Tiger Chen) is a delivery guy studying Lion Kong Tai Chi on the side. We open with him in a pose, ready for the day to begin, and go straight to his master’s temple as training commences. But there’s a growing darkness inside him that his master fears isn’t being taken seriously. Against his master’s wishes, Tiger wants to use his Tai Chi as a fighting style instead of its typically passive reputation. On the other side is Kanada (Reeves), a wealthy businessman who runs a nefarious underground fight club in China. The cops are on his trail, but he’s so ahead of the curve that he can continually toy with them, at one point even leaving flowers at a vacated fight arena. Keanu is, frankly speaking, a “badass” in Man of Tai Chi, but he hams it up for great laughs, seemingly intent on trying to replace a fighter that refused to kill; when Kanada witnesses Tiger fight on TV, he sets out to bring him into the lucrative fold and, no less, position him as a champion.

Reeves proves himself a slick producer of images: whether it’s impressive crane shots or hand-held work orchestrated during a tightly choreographed scene, a consistent energy persists. Yes, it’s irreverent at times, but Tai Chi exudes confidence in its silliness, too, never actually treating the subject of martial arts as light or inconsequential. Nevertheless, much of the dialogue — especially by the faceless, indistinguishable antagonists — is dull, sometimes even painful. Considering Reeves made the film overseas, it may be worth noting that much of the dialogue — about 85 percent of it’s in Cantonese or Mandarin — showcases a limited English vocabulary.

If anything is clear, it’s that this won’t be the only film from Reeves, a fresh voice who knows what to deliver for a good time. (Even the score proves entertaining.) As Tiger rises through the ranks, he’s tested by different fighting styles that continually holds your interest, with different venues and different stakes on display each time. (At one point Tiger even has to face two guys at once, and it doesn’t fall to shambles.) If you’re looking for great action wrapped in a film that isn’t afraid of some lighthearted silliness, you should find your time well-spent with Man of Tai Chi.

Man of Tai Chi screened at Fantastic Fest 2013, hits VOD on September 27, and will be in theaters on November 1.