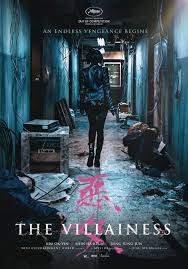 Fantasia Review: ‘The Villainess’ is a Visceral, Convoluted Quest for Vengeance

Writer/director Byung-gil Jung sure knows how to open an action flick. Think Oldboy‘s hallway scene from the first-person perspective of Hardcore Henry spilling over through a non-descript doorway into a wide-open setting for a one-on-twenty bloodbath a la Kill Bill‘s House of Blue Leaves sequence. Only when the orchestrator of this carnage is picked up and shoved headfirst into a mirror does the camera stumble backwards to show Sook-hee’s (Ok-bin Kim) bloodied face and grimace for more. It’s the type of over-the-top, out-of-control set piece most films work towards as a finale nobody will ever forget and we receive it as soon as the lights go down. A breathtaking jump through a window augmented by police sirens in the distance later and this party has only just begun.

If it wasn’t one-take, it was shot to look like it. You become so wrapped up in the in-close movements bleeding in and out-of-frame that it’s difficult to remember much besides the adrenaline rush it catalyzes. Jung and co-writer Byeong-sik Jung have to move towards a convoluted puzzle box of mystery after such a visceral endeavor to simply calm us down. It can be frustrating to get a handle on plot—Sook-hee’s unwitting initiation into South Korea’s Intelligence Agency as run by Chief Kwon (Seo-hyung Kim)—but the disjointed glimpses of dream, memory, and reality ensure our senses are perked and attention honed in. We’ve stumbled into a lair of female operatives training for sleeper cell assignments. They learn the assassin’s craft while Sook-hee is already a master. She’s The Villainess of the title after all. Her quest for vengeance started long ago and for all we know was just completed in scene number one. Now enter flashbacks as a young girl watching her father’s murder before a ruthless assassin named Joong-sang (Ha-kyun Shin) saves her. He eventually teaches her the skills to mow through those nameless henchmen, the two ultimately falling in love. Where is he now? We don’t yet know. Why did she kill those men? It’ll be made clear soon. And what exactly does Kwon want with her? Could it be to focus her rage and use her as a tool before setting her loose after ten years? Or perhaps it’s to free her from a past she’s yet to fully comprehend?

It’s a wild first act with giggling ballerinas and actresses putting on façades to hide their malice opposite suit and tie men behind closed-circuit televisions taking notes and surveying. We meet an adversary in Kim Seon (Eun-ji Jo), the cream of this female student crop before being unseated by Sook-hee. And there’s also a potential ally in Hyun-soo (Jun Sung), an ambitious young male recruit who knows being assigned as Sook-hee’s handler (undercover while pretending to be in love, of course) would be a huge promotion. One provides her a mirror with which to see what her future may hold while the other reminds her of the promise of normalcy her unorthodox life has yet to instill. If she can follow Kwon’s orders, she’ll soon get to choose. There’s a lot going on with forbidden love, a surprise child, and multiple betrayals of trust—each new revelation as overtly melodramatic as possible to justify the body count’s unbridled excess. It can get confusing when past and present meld through intuitive cuts rather than clearly defined vignettes, but flashbacks are almost always triggered by déjà vu so that they make sense thematically whether you comprehend their place in time or not. The many twists and turns don’t arrive with shock or surprise, but that only proves they make narrative sense to the whole. I’m uncertain anyone watching would care either way, though, since the action has a tendency of taking over. How the two parties got on opposite sides is quickly rendered inconsequential once fists start flying.

While the rousing prologue is unforgettable, Jung was just getting started. There’s a high-speed chase on motorcycles that begins in a tunnel with three drivers sword fighting as traffic flies by. There’s a first-person escape attempt from Kwon’s facility that continues forward as though we’re trapped in an infinite labyrinth with doors opening to new worlds rather than different rooms. Blades and guns are wielded throughout—streams of blood covering actors, walls, and camera lenses alike. But it all pales in comparison to a battered and bruised Ok-bin Kim with hatchet in-hand climbing out the windshield of a car to jump onto a moving bus. The logistics of such scenes are impossible to fathom. And Jung-hun Park’s cinematography must have some computer assistance since they seem inconceivable without. Sometimes we’re in Sook-hee’s head and others we’re floating around her to soak everything in without ever showing the strings. Surveillance is a big part of the whole so we also watch scenes multiple times from alternate vantage points in order to learn new details that color the characters’ motivations in vastly different hues. The whirlwind of action at the start while Sook-hee acclimates to Kwon’s environment feels like montage without being montage, its fluid transitions through time causing us to wonder if our lead was recast—the idea of plastic surgery burrowing into our minds to literally think the woman in that first hallway is not the same one warring through the narrow aisle of that bus. She remains a badass and yet truly does evolve throughout.

It’s easy to dismiss many plot threads as convenience, but there’s something about the overwrought relationships and hidden connections that amplify our excitement. Jung is moving things so fast (despite a runtime just over two hours) that we’re never afforded a pause to roll our eyes or laugh. We instead buckle down since each revelation means Sook-hee is given another reason to fight—either in honor of someone else or for the distinct pleasure of killing whomever her new target becomes. While we brace ourselves for the next bout of violence our minds are contextualizing the plot to parse it as necessary rather than nonsense. John Wick may have style, but The Villainess has nothing to lose. Sook-hee craves the mayhem and Ok-bin Kim ensures we know it.

The Villainess plays at Fantasia International Film Festival and opens in limited release on Friday, August 25.