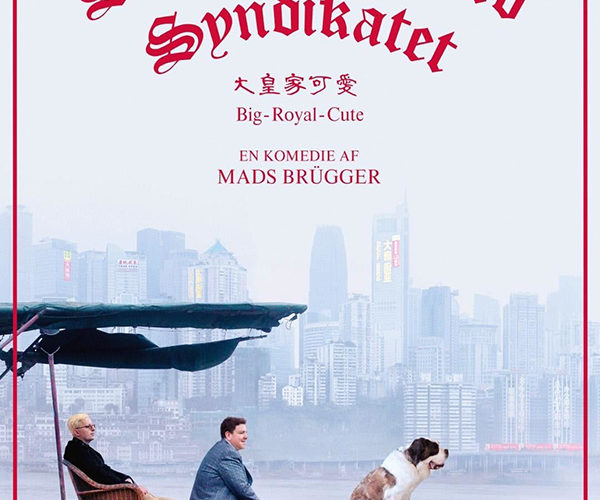 There’s something profound about Danish director Mads Brügger’s documentaries due to his entering dangerous countries under false pretext to capture a result. Whether it’s heading to North Korea as a vaudeville act or the Central African Republic as a Liberian ambassador attempting to infiltrate the illegal blood diamond trade, he creates politically motivated art with an intellectually subversive edge that proves as entertaining as it is enlightening. He’s an edgy, thinking man’s Sacha Baron Cohen in that regard, building characters to go undercover in volatile places where any threat to his wellbeing must be taken with the utmost severity and therefore able to deliver an authentic picture of rampant corruption. It may have taken seven years, but he’s finally back with The Saint Bernard Syndicate. The difference this time around, however, is that Brügger has branched out into the realm of fictional narratives with a script by Lærke Sanderhoff. So while you may assume its strangers in a strange land premise wherein under-achieving Danes Frederik (Frederik Cilius Jørgensen’s wannabe businessman) and Rasmus (Rasmus Bruun’s falsely assumed millionaire heir) try to launch a St. Bernard breeding facility in China is ripe for hidden camera meetings to expose financial and government wrongdoing, you’d be wrong. Well you’d actually be right because it does seem a perfect fit for just such a sting. Unfortunately that’s simply not what Brügger and company have decided to do. Frederik and Rasmus’ potential “angel” investor Mr. Ling (Lee Liheng) is an actor and the prevalent awkward discomfort merely movie magic.

We therefore receive less Brügger than Klovn — albeit greatly subdued and less profane. The comedy is dry as a bone and the interactions intentionally set-up to fail spectacularly thanks to Frederik’s seething temper and Rasmus’ inability to filter his thoughts. And while this should delight many, it couldn’t help proving disappointing to me knowing that Brügger is capable of providing much more. Watching actual Chinese entrepreneurs enjoy the free food and entertainment these foreigners supply without ever calling them back to actually invest is completely different than actors playing their roles. The latter can still work if crucial to a larger, more complex plot, but this one is literally just them imploding over and over again. What starts out endearingly silly inevitably turns laborious instead. What’s worse is that it still might have worked if the comedy were broader. Frederik and Rasmus pair off as an odd couple wherein one wants nothing to do with the other while the other is desperate for inclusion. Rasmus can’t help pushing his way into scenarios he has more potential to derail than assist with and Frederik would call the Pope a heretic under his breath if angry enough. So we watch them lament and/or be oblivious towards every misfire, their finite capital dwindling with every “sky’s the limit” endeavor. Frederik’s Dad keeps calling to discover where his dog Dollar has gone (his enterprising son stole him to be their mascot) and Rasmus’ Mom keeps dodging his every attempt to give her bad news about his health.

And here lies the biggest issue I had with the whole: Rasmus has just been diagnosed with Amyotrophic Lateral Sclerosis‎ (ALS). He doesn’t believe it at first because he feels no worse for wear, but the sudden sense of his own mortality is what drives him to invest in Frederik’s scheme despite the two hardly being friends back in the days before they realized they’d be squandering their elite university educations. I get using it as motivation, but Rasmus craves attention so rabidly that wanting an adventure from his friend-less slog of a retail career would have been inspiration enough. Add the fact that the guy who used to bully him was the one asking and you create incentive via the desire to finally fit in. Because Sanderhoff didn’t think this reasoning sufficed, though, he hurts his comedy by constantly going back to the looming tragedy of Rasmus’ decline. Not only that, he begins using the character’s increasing disability as a punch line until it becomes purely exploitative during the climax. Tell me it’s just a joke all you want, but the simple reality that ALS is shoehorned into this plot specifically for a sight gag proves the joke isn’t funny on its own. Rasmus losing control of his muscles shouldn’t be the point, especially when there’s nothing else in The Saint Bernard Syndicate that’s even close to its level of overtly mean-spirited ridicule to justify its inclusion. You can’t try to earn our empathy when you plan to throw it out the window anyway.

We’re ultimately left with a short film’s worth of material that actually works: the strange wooing of Mr. Ling and his even stranger actions during the process and after. The rest is cringe humor at best, unnecessary asides of hotel living and wittingly lecherous behavior at worst. We wait for something to happen that’s worthy of shaking us from the doldrums of repetitive character quirks and yet the one instance approaching shock arrives with a whimper at the very end. Without the weight of verisimilitude from Brügger’s previous work, he provides us little more than sketch comedy tropes representing about three times as much toothless filler as fruitfully substantive content. The few times I laughed were a testament to Jørgensen and Bruun’s performances overcoming their flat, uninspired script.