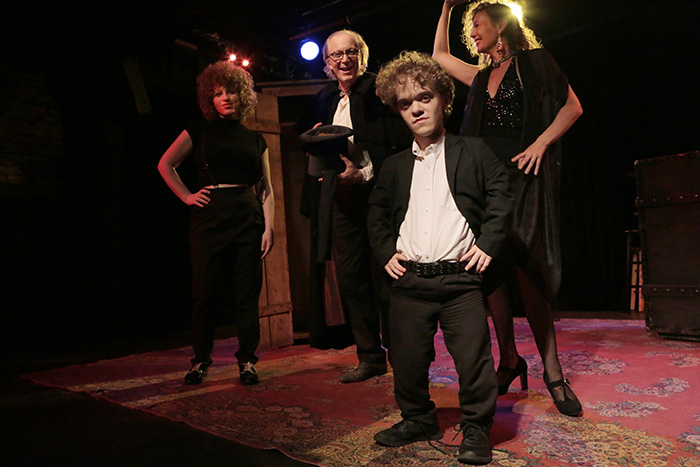 In a world where white Americans start feeling unjustly marginalized as the stranglehold of power they’ve possessed in this country since its inception begins to show cracks in a bid for true equality that they continue fighting tooth and nail against, they’ll steal whatever advantage they can to retain the status quo. They must since their success arrives from exploitation of labor from the lower class. They accrue a nest egg of profit, keep employees under thumb with the threat of firing them, and sit on their laurels buying property and investments in ways that optimize loopholes in the tax system. And anyone who gets in the way is simply removed from the equation via corruption, political clout, and for-profit healthcare. They wield their privilege with a magic wand. So how does writer/director Onur Tukel help their quest to maintain world domination? He gives them real magic. First it’s just for show so The Magnificent Larry (Ronald Guttman) can wow audiences at his little basement theater, playing on the capitalist mandate of giving consumers what they want. But while his success works to make him power hungry on a God-like quest for omnipotence he’s experienced before, two other men see the practical application of his uniquely potent disappearing act. One (Jamie Block’s Jamie) is a sleazebag landlord who could use it to unshackle himself of the rent-controlled minorities threatening his 30% increase with litigation. The second (Tukel’s Oscar) is a misogynist who’d erase the embryo inside girlfriend Chase’s (Charlie LaRose) uterus with a snap of his fingers.

Black Magic for White Boys is thus exactly that. Tukel provides his patriarchy with the fantastical means necessary to become the perfect embodiment of entitled oppression: regular white guys who need to stick together. That’s how they see each other at least—men attacked by a politically correct society despite “not having done anything wrong.” Because as Jamie explains it to a table of aging Black seniors who’ve cooked him dinner to appeal to his humanity, racism is being co-opted by a lazy working class. He’s not saying they can’t stay in his apartments. He’s not saying, “Whites Only.” No, he’s merely raising the rent. The tenants are the one’s bringing race into the question by calling him “White Devil.” And it pains his tiny little unmoving heart. The insidious nature of gentrification is just one hot-topic Tukel lambasts by letting his horrible white men run wild in New York City. There’s also Oscar’s lay-about living on an inheritance trying to force an abortion on his girlfriend because she “tricked” him into getting pregnant. There’s “nice guy” Dean (Colin Buckingham) who believes himself entitled to Leah’s (Leah Shore) love while her asshole ex-boyfriend (Brendan Miller’s Ralphie) seeks to find a cure-all pill that will make him sensitive enough for her to come back to him. And who’s supplying that remedy? An affable drug-dealer named Fred (Franck Raharinosy), of course. He has everything one needs to put a Band-Aid on a severed artery and pretend the underlying systemic problem has miraculously disappeared. But nothing ever disappears completely.

Larry can send his wife away and build his reputation up without her nagging, but she’ll eventually come back to hold a mirror up to his villainy. Jamie can make his troublesome renters go poof, but their absence will inevitably only ensure that everyone knows he’s doing something unsavory and must therefore watch out they’re not next. And Oscar can let his desperate yearning to remain a teenager in a grown man’s body sabotage his relationship through deceit, but he can’t seize control of Chase’s bodily autonomy and expect to keep her love. Whatever they do to get a leg up in the world always runs the risk of turning things worse. But they’re still white men. Somehow they’ll find themselves victorious because of the suffering they cause. It’s this fact that makes Tukel’s film a difficult sell. While it’s literally the point of what he’s doing, I couldn’t help but think its allowance for their horrid natures to succeed with little more than speed bumps along the way was too cynical. The only way to allow for their happiness is to destroy those in caught their path (namely women and Black residents). Where this was okay at first because those women and POCs fought back to put the men in their place, letting the latter take control away again ultimately becomes more a comment on the victims than them. Tukel might be showing how white America prevails despite its monstrousness, but he’s also showing how those walked upon are fated to endure that pain forever.

No matter what they do to combat it, they’re left wishing things were different. That which they hate winds up being what they needed. So even when the white men don’t get their way, they somehow benefit anyway. Since the winners and losers never shift positions, what started as funny in its un-pc rhetoric and self-inflicted pain quickly turns depressing. Good people are ruined, bad people are rewarded, and it’s hard to watch without squirming in your seat because there’s no escape from the horrors of America’s economic, societal, racial, and gender disparities. Tukel trades in provocation and it works because our laughter stops targeting the oppressors to eventually target the oppressed. This realization ruined my enjoyment by “Chapter Five,” but that’s the point. It shouldn’t be funny.