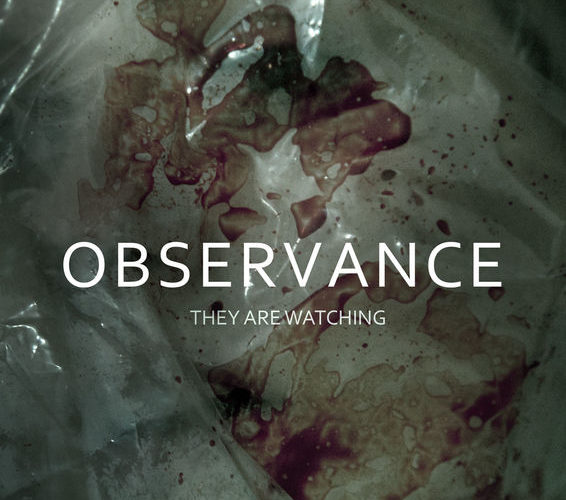 You know you’ve seen something special when your only thought upon completion is whether to watch again or scour the internet for possible interpretations. This is what Joseph Sims-Dennett‘s Observance did for me. A horror/suspense filled to the brim with atmosphere and mood, its tension gradually rises like the dark liquid barely contained by a jar in the corner of the room assigned to Parker (Lindsay Farris) for his latest surveillance job. Close-ups of that same fluid dripping down the walls cut in as filler frames when we aren’t transported to the gorgeous grays of a rocky cliff face overlooking the ocean or the claustrophobic waking dream of supposed banality through a camera lens reaching its mysterious breaking point. Its beautiful dread renders its lack of easy answers moot, forcing you to look closer and decipher them yourself. Is it a document of Parker’s descent into insanity or the latest revolution of a cycle of unprovoked violence as part of an unexplained demonic ritual? Observance is both or maybe neither at all. Sims-Dennett and Josh Zammit‘s script bursts at the seams with visual clues, secretive backstory, and half-answers to questions concerning everyone involved. We know Parker’s estranged from his wife after losing their young son. He has mounting debts as a result of the boy’s hospital stay and he’s gone back to his private detective work too soon in response. Nightmares containing those serene shots of the tide crashing against the rocky shore also possess memories of his son playing in the distance. This personal terror coupled with strange occurrences while spying on Tenneal (Stephanie King) from an unsavory apartment quickly gets underneath his skin.

As for Tenneal—we learn a little more each demarcated day. She’s engaged to Bret Buchanan (Tom O’Sullivan) who’s just abusive enough to give Parker’s objectivity pause and she refuses to leave her apartment either because her fiancé says so or because she’s trying to avoid him. What we do know for sure is that Parker’s client seems uninterested in anything but assurances “nothing has happened”. So when Bret first pushes Tenneal, the middleman on the phone (Brendan Cowell) simply says it isn’t their concern. Keep an eye on her, attempt to get audio, and report back each day. What’s Parker supposed to do when they’ve offered him an extra fifteen grand for a couple extra days? He needs the cash and they obviously know it. They weren’t, however, counting on his tenuous hold on reality. Or were they? The construction of the story is impeccable as Sims-Dennett systematically opens our senses. First all we can do is look through Parker’s viewfinder. Next we can listen in on Tenneal’s phone conversations via a tap. And only once we’re almost halfway through the film can we finally listen to the garbled words spoken behind the glass after a risky maneuver is made to set up mics. The rub is that we learn almost nothing from these exchanges—or at least nothing relevant on initial glance. Parker’s surveillance is more our entry point into meeting the players because until Bret and Parker speak with one another, it’s all just speculation. What the Bret says will throw you for a loop and everything suddenly takes a much more sinister tone as layers of deception, motivation, and free will are revealed.

The filmmaker is quick to label his sophomore effort Roman Polanski-esque and he is not wrong. Observance‘s pacing, depth, and atmosphere all recall that auteur’s early suspense horrors. There are also shades of David Lynch in the blurring of fantasy and reality. Just when you think you have a handle on that separation, the vantage point alters without warning. Parker disappears behind closed doors and it becomes Tenneal who we follow in real time instead. The move simultaneously allows the former some off-screen room to ready for our next visit inside his apartment and the latter a clear, undisturbed dialogue with Bret that carries as many questions as it does answers. Motifs found earlier in passing reappear in full color and events begin to foreshadow themselves from both history and hallucination. Are we seeing them or is Parker? How much is real is Sims-Dennett and Zammit’s to say. Is creepy imagery like a dark shape moving inside a bottle of milk for our benefit? How about that bottle showing up in Tenneal’s fridge later on? Is a shadow on the previous day’s photo a reflection of Parker through his kitchen window, a stranger manifesting while he sleeps, or something less human? How are things constantly moved despite Parker securing them seconds before he left the room? These impossible acts increase steadily as the days count down and it’s a fifty/fifty shot whether the lead character is doing it himself or not. We start to hypothesize theories as to why facts Parker learns from another private detective (John Jarratt) repeat themselves and we question just how much Bret knows once all sense of order crumbles.

We also second-guess everything we’ve seen. As Parker loses it a la Natalie Portman from Black Swan—cringing physical duress included—it becomes crucial that we look deeper at supposed truths previously taken for granted. I look at the jar of dark liquid especially because its rising and stagnancy could very well be marking the passage of time as much faster or slower than we’re originally lead to believe. And because the film takes such pains to shield our senses and force us to guess right alongside Parker, we cannot help letting his paranoia permeate our experience too. After all, how can the images of a bloody boar’s head, plastic veiled woman, and the hellish visage of a child taken too soon not electrify your brain into solving a puzzle that may not even be there?

Observance is currently playing at the 2015 Fantasia International Film Festival.