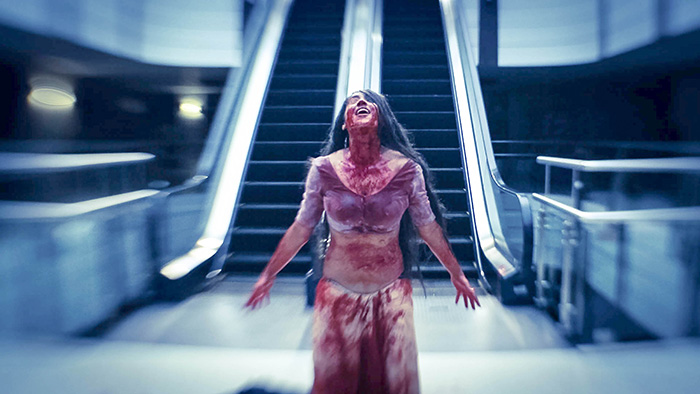 Called the national game of India by some, Pacisi has evolved throughout the centuries into multiple iterations. One of the most popular versions patented in England around 1896 is Ludo. Pretty much two to four players have four tokens each that they must race around the board in accordance to the number on the dice they’ve rolled. Those in America will know it as Parcheesi, but the board isn’t quite the same. So when the game inscribed on a piece of leather finally arrives around the midpoint of Q and Nikon‘s film—aptly titled after the English version it resembles—you may only have a passing recognition of its design. That’s kind of the point, though, as an over-long and bloody expository second half describes the mystical powers held beneath the board’s illusively false commonalities. Ludo therefore becomes an origin story for a game that children play steeped in gore and vampiric mythology. The filmmakers surround it with a verbose history, making it fearsome as a “forbidden game” two tempted souls unleashed upon the world ages ago in direct opposition to their clan’s sworn oath to contain it. This is a cool direction to take and an inspired catalyst for a horror film soaked in blood, but it feels completely out of left field in comparison to the story introduced to us at the start. These halves clash as a result, not because they don’t belong together—one is literally bound to the rules set by the other—but because their disparate tones feel extra incongruous due to their reversed order. We witness the aftermath of a curse before even knowing it exists.

This proves disorienting—simultaneously assisting the terror factor and confusing from truly grasping what’s occurring in real time. From the moment the horrific Mirumi (Rii) explains the story of her and her lover Kirama’s (Joyraj Bhattacharya) role releasing the game from its cage, everything begins to overlap. Characters from the present and past morph into one as quick cuts through the darkness show Mirumi and Kirama in youth opposite the pretty young girls fate has lured onto their path today while Shaman Oshini Irum (Tillotama Shome) looms above all as a puppet master in complete control. The visuals stutter and blur into each other as the illusion of time is folded in on itself and the power of the game increased to maximum potential. Their relationships to one another stop mattering because the board is everyone’s master. The graphic nature of the body horror and ritualistic aesthetic merging ancient fields with a contemporary shopping mall is deftly handled as expertly constructed light design and gruesome make-up effects enhance the mood. Its violence will make any fan of the genre squeal in delight, but I can’t help thinking that it’s not quite as effective as the initial journey into Mirumi and Kirama’s clutches. The fact Ludo was filmed within a country that once issued arrest warrants for Richard Gere and Bollywood star Shilpa Shetty due to an innocent public kiss deemed criminally vulgar only makes what the Fantasia Festival’s Simon Laperrière calls “a Hindi Spring Breakers” more resonate. That’s a perfect description for the first Act’s hedonistic and highly sexualized night out for Ria (Subholina Sen), Payel (Ananya Biswas), Pele (Soumendra Bhattacharya), and Babi (Ranodeep Bose).

This quartet is in desperate need of a release from the traditional lifestyles their parents have set forth in a twentieth century that’s moved beyond such conservatism. We’re thrown into the conflict between generations right away as Ria’s mother (Kamalika Banerjee) yells to know where she is going dressed like a “slut”. What follows is a sharply cut progression of clubs, drinking, quarrels with other neighborhood teen deviants, and the unfortunate reality that no hotel owner will dare let children have sex in his establishment without a marriage license proving a lawful union. Rock music blares as the soundtrack punctuates the fast motion and adrenaline rush of incidents such as bribing police officers to let them go. Payel eventually suggests going to the mall for some privacy and it’s there that two apparent bums change everything. Q and Nikon have perfectly orchestrated this portion of the film and really brought western sensibilities to the visuals when most Indian output is traditional or Bollywood. And when Mirumi and Kirama’s “bums” start knocking the kids off-balance until the Ludo board hypnotizes them into playing against their will, we revel in the fact there’s absolutely no explanation for what’s happening. Entrails are eaten, screams are screamed, and sanity is utterly erased from the proceedings as the hunt commences. Deciding to therefore offer that explanation afterwards proves a strange choice. Not only does Mirumi’s story grind things to a halt, but it’s almost as though we’ve walked into a new movie altogether. Would it have been better if this exposition occurred first? I’m not sure. I think it would have been better to simply leave things undefined.

That’s a tough idea to posit since the story of the Ludo board’s power and the mistakes made to unleash it is captivating. Watching it a second time is probably an ideal necessity to appreciate the differing speeds and content after knowing what’s next. It comes down to personal preference, though, wherein I enjoy the fast-moving adventure to death with horror tropes of sex and virginity working double time in a nation so full of taboo. I was enjoying myself so much, wondering where the story might go as the vampire allusions predict someone will be converted, that the about-face was hard to swallow and my reaction hard to ignore. In the end Ludo is a gorgeously unexpected ride with authentic performances and memorable creature effects. I just wish it gelled tonally a little bit more.

Ludo is currently playing at the 2015 Fantasia International Film Festival.