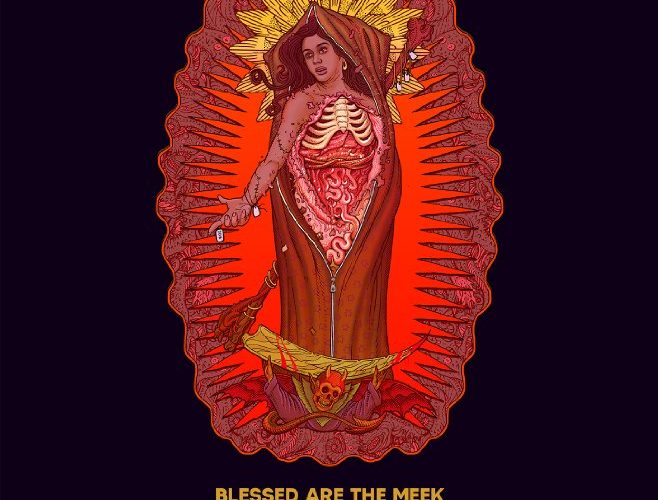 An ex-junkie, ex-convict, and luchador enter a fish taco shack … the punch line is a three-pronged adventure through Compton while engulfed by the shadow of a lunatic pimp moonlighting as a black market organ wholesaler. Director Ryan Prows and the rest of his quintet of writers (Tim Cairo, Jake Gibson, Shaye Ogbonna, and Maxwell Michael Towson) bring together a menagerie of monsters, fiends, thugs, and criminals all searching for an escape in their violently heart-warming film Lowlife. Full of heinous acts justified by a universal goal to save the ones they love, every eccentrically drawn character earns our sympathy despite the blood spilled by their hands. With their worlds colliding just as each appears ready to implode, a common enemy unites the hope within to reclaim their honor.

That villain is Teddy Bear Haynes (Mark Burnham): restaurateur to the public, homicidal madman to the streets. The guy has a lot of irons in the fire whether it’s pulling the strings of his adoptive daughter (Santana Dempsey’s Kaylee), ICE Agent Fowler (Jose Rosete), or the legendary Mexican hero El Monstruo (Ricardo Adam Zarate). They all serve to make him money with each revealed as highly expendable if that purpose is not met in full. They facilitate his kidnapping of illegals to be harvested for organs or violated for sex, their lives forfeit and gradually devolving towards a point of no return. Kaylee consents to remain alive (and feed a heroin habit), Fowler’s in it for the financial gain, and El Monstruo works towards sustaining his storied legacy.

The latter’s mission earns him the focus of one of four subtitled chapters—the first three of which occur concurrently before ending in the same rundown motel room that begins the fourth. He’s the son of El Monstruo and grandson of another. His luchador mask is a beacon of hope, the wearer a hero of immense stature embellished by time but not meaning. He’s a runt by comparison yet no less vicious. Ruled by rage, El Monstruo falls into a fugue state marked by a high-pitch squeal when his blood boils over. It’s a fantastic storytelling device allowing Prows to cut past the carnage for aftermaths as gruesome as they’re often hilarious. He’s a man to fear, but also one compromised by his fidelity to Teddy rather than the people.

That leaves the ex-junkie (Nicki Micheaux’s Crystal) and the ex-convict (Jon Oswald’s Randy) as focal points to band together with El Monstruo as a super team of seemingly lowlife degenerates until their courage and strength prevail over their vices, regrets, and opportunism. She owns the aforementioned motel with her husband, a man dying unless he receives a new kidney (enter Teddy). He’s released from an eleven-year stint in prison to find his world turned upside down and best friend (Ogbonna’s Keith) embroiled in an ugly business divorce from, you guessed it, Teddy. What we don’t know straight away is that this unlikely trio is connected by more than the man with his boot at their throats. I’ll leave that discovery to Prows and his darkly humorous, interweaving plot.

The result is a film that’s as brutal in its imagery as it is funny in its execution. More than just the glorious bait and switches conjured by El Monstruo’s rage-fueled lapses, Lowlife provides countless moments of subversion born out of the self-reflexive absurdity Prows and company have infused in each scene. The filmmakers do a wonderful job projecting expectations onto us in one story only to provide something completely different in the next. Their characters make as many assumptions as we do until an atmosphere is cultivated wherein anything can and will happen. Randy and Keith’s friendship delivers the best instances of this as their mismatched appearances/roles are used for both comedic effect and story thrust. Those we laugh at are quite often those we ultimately champion.

Easy comparisons have led to talk of Quentin Tarantino, but that’s merely a reductive soundbite in my opinion. Action propels us forward rather than dialogue and the time shifts are strict rewinds rather than disparate vignettes assembled by context rather than content. Prows has created a very straightforward narrative despite his necessary diversions along with an antagonist so over-the-top that a comparison to Tarantino the actor would be more apt. Rather than attempting to transform genre into a higher art form, Prows is simply engaging with tropes to spin them in an entertainingly memorable way. And since his debut feature is written and shot with comedic timing as its motivating factor, it’s more appropriate to compare the film to a bona fide comedy than any sort of hybrid.

I’m not looking to demean—just mediate expectations and cut through hyperbole. Going in with thoughts of Tarantino can shine what’s onscreen in a disappointing light and Lowlife doesn’t deserve to be judged on fitting a box it doesn’t try to fit. This tale of flawed humans pushed to the brink of morality and civility in order to re-instill morality and civility onto a world being dragged down to Hell is one that succeeds on its own merits. Its characters are unforgettably batty yet impressively noble (see Zarate’s Monstruo and Oswald’s Randy for the strongest contradictions), sympathetic yet fierce (Micheaux’s resonate complexity revealed economically with honesty). And their actions consistently achieve dramatic merit despite always culminating with a joke. Who says a message of honor can’t also be fun?

Lowlife screened at the Fantasia International Film Festival and opens on April 6.