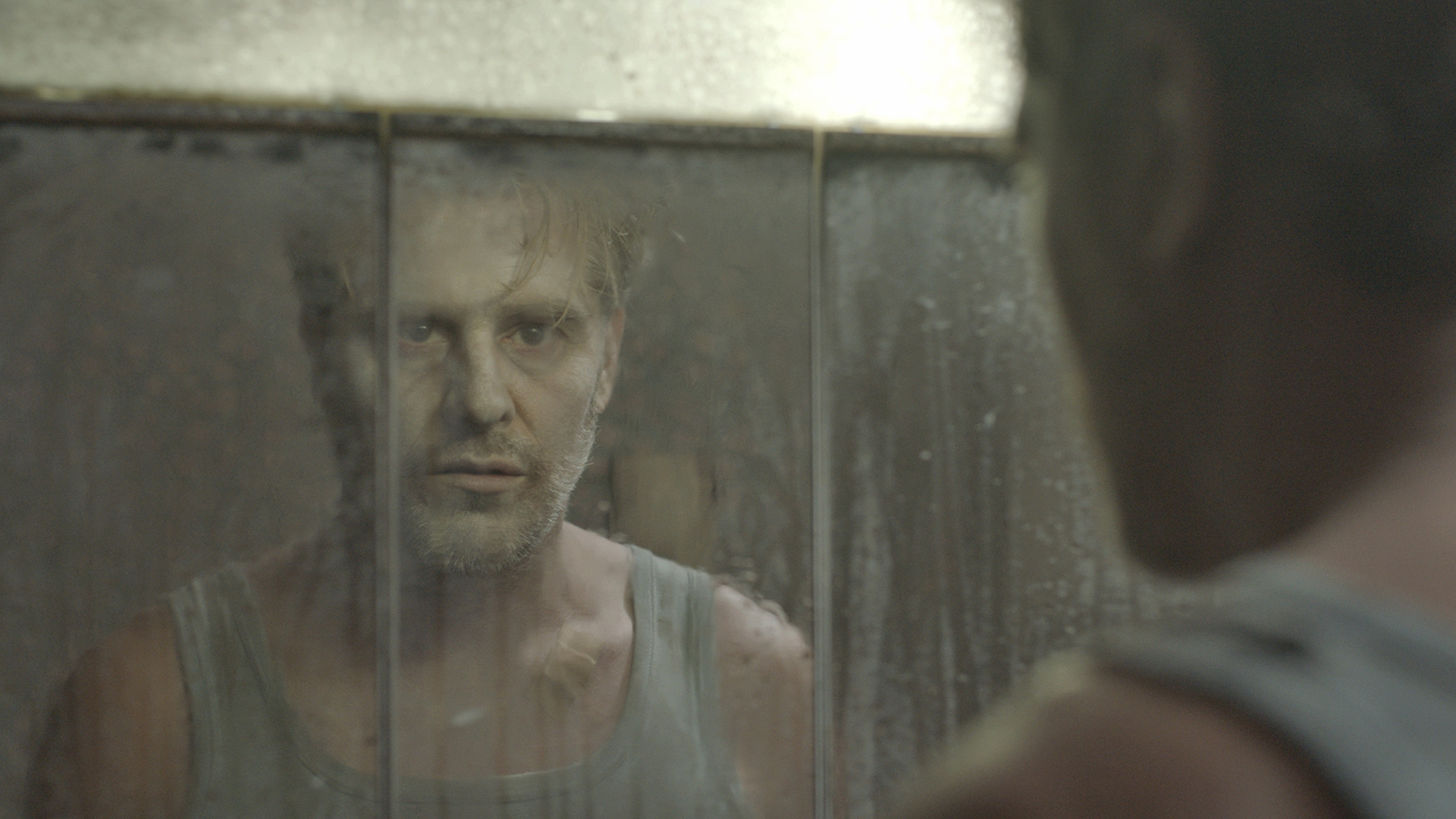 I’m not sure what I just saw. Was it surreal comedy in a setting that exudes sympathy puke aura? Was it a nightmarish horror sending us down a chaotic rabbit hole of insecurities, hopes, and inferiority? Perhaps a little of both? Either way, Stefan Lernous’ Hotel Poseidon throws any semblance of a narrative out the window with an opening scene that does nothing but rotate around the lobby of this derelict establishment to supply an ingenious title card explaining the film’s true star: its locale. The lights flicker, the coffee machine combusts, the tenants (read: squatters) do whatever they want, and someone might just be dismembering a body in the kitchen—but if anybody asks, he’s just doing “kitchen stuff.” And poor Dave (Tom Vermeir) simply wants to sleep.

How can he when his neighbor watches porn all day through the paper-thin walls? Or when his friend Jacki (Dominique Van Malder) comes round uninvited to talk his way into putting on a wild party for free in the backroom? Or when his mother (Tania Van der Sanden) is screaming at him about being irresponsible while his stepfather (Chiel Van Berkel) stares disapprovingly? Dave probably shouldn’t even be here considering its state of disrepair. I don’t think he’s even tried to fix anything since his father left it to him upon his death—not because he doesn’t know how, but because he doesn’t realize anything is wrong. Just watch his morning routine of pills and dirty water after “wiping” a mirror well beyond the realm of ever getting clean again.

The hotel’s a metaphor for Dave’s decrepit life devoid of prospects for improvement. If not for the porn-watching neighbor having to ramble on and on after Dave demanded he turn off the television, he might not have even left his room that morning. Within that word salad, however, is a call to arms to use this day as a point of rebirth. He tells Dave to do something he never would as a means of mixing things up. Maybe it’s putting on his glasses to head downstairs. Maybe it’s opening the door to a confused woman (Anneke Sluiters’ Nora) whose travel advisor sent her here despite it being closed for who knows how long. Whatever the spark, we’re in for a bumpy ride.

Lernous is the artistic director of Belgian theater company Abattoir Fermé; Hotel Poseidon is their first film. He talks about how his writer side and director side are two different people at creative odds, thus the reason this finished product is allergic to convention. That’s not to say what he provides us isn’t linear in progressions as much as it’s indecipherable in intent. The project isn’t therefore about giving Dave a hero’s journey, romance, or even some sort of fall from grace. It merely exists to push him to the brink of sanity so that we can all discover what happens when he gazes into the abyss taunting him with sweet release. At its wildest it’s every genre mashed into one anarchic hallucination.

So I’m not sure anyone can “like” it. We can respect it, though. With nothing to grab hold of beyond the experience of it all, our investment comes down to aesthetic and production design more than plot. For example: nothing happens during the party sequence, yet it proves unforgettable in the dizzying whirlwind of extras spinning in and out of frame while Dave is passed around from drink to drink until a mass of limbs threatens to crush him unless he can escape their grasp. Think a less smooth version of the mother! climax combined with the eccentric vibes of Climax and you can approximate the tone and general sense of unease conjured. Yet it still gets weirder from there.

Considering the mystery still surrounding Nora, how could it not? She’s all about staying in this cesspool and we have no idea why. She says it’s for one night but brings plants and glass panes and a friend. It’s this totally separate series of events happening in the background that we often forget about completely because Dave is embroiled in countless other dynamics throughout the building, but things will come back to it for possibly the strangest sequence of all: Dave trapped in a terrarium to live out a fantasy alongside an unnamed woman (Tessa Friedrich) that seems to span years under the watchful eye of his captors. Time, space, identity—Lernous tosses them all in the trash. Meaning would only water down his unchecked volatility’s hedonistic desires.

The humor won’t be for everyone (I laughed twice with most jokes earning an eye-roll instead) and the set will turn off even more before they have a chance to embrace it as a Venus fly trap of danger, excitement, and unpredictability leading them to captivating returns. Those who stick with it, though, will understand it’s all a testament to Dave’s psyche. Rather than leave his room, he might have tripped into a psychotropic nightmare of anxiety. Why else would there be so much sexual frustration and familial strife courtesy the worst people possible popping up at the worst possible times? How else could he live a full life in a glass enclosure only to leave as though nothing happened? Maybe Dave should stay put after all.