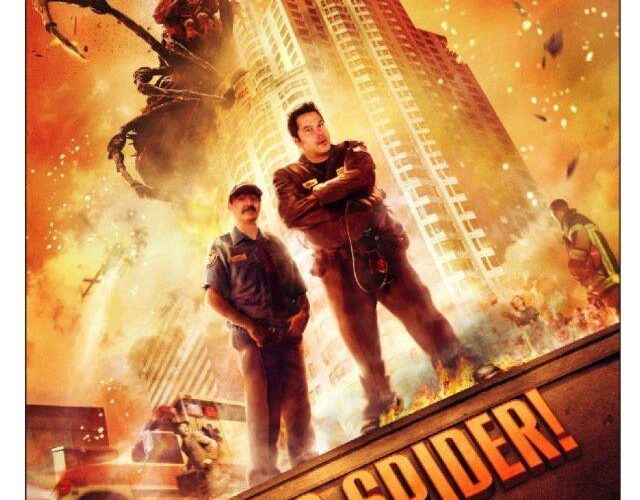 The feat of articulating what it is exactly that actually separates Big Ass Spider! from recent SyFy channel monster mockbusters like Atlantic Rim or the tired social-media sensation known as Sharknado is too easy. If anything, the exclamation point punctuated title is what tips off anyone as to what they’re in for; not just the promise of a creature feature, but one giddy in its own self-awareness and thus we’re supposed to laugh with it, and not at it.

But as presumably those SyFy titles don’t invite you to laugh at them, they embody a spirit closer to actual creature features of the 1950’s, while Big Ass Spider! epitomizes a certain cynicism of the 21st century. Of course, this is fine to some extent, as it doesn’t instantly negate any entertainment value (many will speak to the pleasures of say Piranha 3D) yet does that excuse a lack of any striking images or clever jokes?

We begin with an exterminator, or rather spider-expert Alex Mathis (Greg Grunberg) who after a routine job tending the home of Mrs. Jefferson (esteemed character actress Lin Shaye, in what should be a more amusing cameo) is bitten by one his frequent victims. In a genre-friendly bit of coincidence, we’re led to a military hospital that not only tends to people but also some alien life-forms they’d like to, but ineptly keep under wraps. And what else could one of these aliens be other than the titular big ass spider? Genre films often allow the chance for character actors to step up to the leading man plate; often borne out of low-budgets not being able to attain big-names and as well (and apparent in this) the use of a believable put-upon face and body; a little pudgy or not traditionally handsome, and Grunberg is certainly believable as an exterminator, though never quite giving into a hangdog persona with his constant wannabe-ladies man act.

That he also essentially forms a buddy cop duo with the hospital’s security guard Jose (Lombardo Boyar); his “SECURITY” lettered ballcap staying on his head throughout the entire runtime, speaks to Big Ass Spider’s potential outside its low-aiming yuks to reflect something relevant. Both heroes are in the types of jobs stuck between blue and white collar work; serving the people and never behind a desk, yet not part of an overtly manual workforce.

As the dear departed Tony Scott was oft cited for his championing of the working class in his later works — separating them from many of the action-thrillers of their ilk — Big Ass Spider! has the chance to affirm something which, while more familiar, would at least elevate it to some degree. And in that vein, echoes of strange racial politics are throughout the film; Jose breaks into his native language being referred to as “Spanglish” by Alex, as well as television interviews in which African-American stereotypes (recalling not just hip-hop culture but seemingly the noisy movie theatre patron) flamboyantly expound on the titular spider. Yet in trying to discuss the larger social concerns of this film really only evidences how the mind wanders during it and almost the need to talk around it rather than about it. This is no doubt thanks to its uninspiring action scenes, with a flat cut to-gunshot, cut to-spider visual routine. Coupled with the just as standard approach for dialogue, it makes much of the comedy fall flat, and thus its much-wanted outrageousness not attained.

Though it must be noted that many of the military action sequences are seen mostly through the prism of control-room screens displaying first-person shooter visual vocabulary; turning the winking from not just past monster movies to current action film and video-game tropes. Again, the film succeeds in creating an overall plastic nature, but never to the degree where actual excitement or satire arises.

Considering the film’s Lloyd Kaufman cameo, which obviously invites you to thoughts of his brand Troma; films ranging from The Toxic Avenger to Class of Nuke ‘Em High, which while upfront about being trash, plumbed the very depths of it, never settling for middling self-awareness like Big Ass Spider! does. In an age when the grindhouse doesn’t really exist anymore and the communal experience gradually evaporating, it seems that Big Ass Spider! is made solely for a solitary snickering viewing.