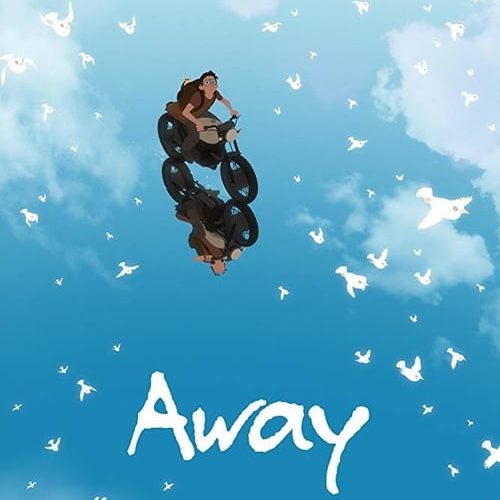 Fantasia Review: ‘Away’ is a Landmark of DIY Independent Animation

A one-man show on-screen and behind it, Gints Zilbalodis’ Away is an obvious labor of love. Opening like a videogame wherein our lead is found dangling by parachute from a tree, we haven’t a clue about his surroundings and neither does he. Before he can release himself and begin a search for answers, however, there arrives a lumbering behemoth on the horizon with dead eyes laser-focused upon him. Maybe it’s a friend or maybe it’s his end—the curiosity and hope for the better allowing the boy to remain still despite a palpable fear of the unknown. Only when it closes its hands around him does the void of its clench reveal dread was the correct response. Acting fast, he smartly releases the chute and runs.

Known for his short films, Latvian animator Zilbalodis has really jumped into the deep-end artistically here to expand his vision and hone his craft enough so that the credits consist of one name: his own. Seeking to try his hand at every aspect of a feature to better prepare for the future and its necessity of knowing how to get what he wants from the team he hires around him, Zilbalodis does everything straight down to the score. It’s actually unsurprising considering the film is devoid of words and so reliant on its music to help lead our emotions and intrigue forward alongside the boy. Whether a dreamy night sky of darkened demons staring into his soul or tense encounters at a creaking wooden bridge, we’re wholly invested.

The first stop on the boy’s adventure for survival is the Forbidden Oasis—not to him, but the formidable monster on his tail. While it waits frozen at the circular entrance, our hero wanders over to water, plucks some fruit, and befriends a yellow bird still too young to properly fly on its own. A much-needed reprieve from the running, it’s here where he also discovers a backpack containing everything he must use to reach safety. With another very videogame-esque maneuver comes the presence of a map marked by a clearly defined pathway of arches guiding him past his foe towards the promise of civilization. With a motorcycle he’s yet unsure how to properly use at his disposal, the journey will be dangerous. But no good alternatives exist.

It’s a beautiful ride regardless of the risk as he drives over Mirror Lake, walks the aforementioned bridge, and takes respite at Dream Well with a group of cats patiently waiting for a geyser of sustenance to spew out and pool. The goal is to reach Cloud Harbor and whatever it may possess before his shadow catches up. The boy has plans to erase the relentless figure from the equation, but even his successful attempts to do so feel impermanent. Why? Because he dreams of these creatures as though they were once human before finding themselves slaves on an inescapable track in order to feed on the lives of those animals in its way. The glimpse of a plane crash can’t help but suggest this island is purgatory.

Like “Lost” before it and its own fluid force of evil traveling as a blackened construct of emptiness, that read is surely in the eye of the beholder. You could watch Away as being about a boy lost and in search of home or a test of strength to earn a place in an afterlife only accessible by those deserving of it. Zilbalodis does show us that his lead is not the first person to face the same challenges he does now. So there’s definitely a place in this story where that protagonist must weigh their courage and decide if they’re the type to risk everything or succumb to fear. Will they save themselves or their friend? Will they sink or swim? Fall or fly? Live or die?

These questions are answered by the mere act of trying and the unwavering empathy that may just save this boy’s life later in a display of karmic salvation. He moves through stunning vistas and by cute critters each rendered (like him) without outlines so color variances are the sole means of defining depth and three-dimensionality. That sounds crudely simple, but there’s nothing crude about Zilbalodis unique style. Even his antagonist comes with a bubbly softness to it wherein capture almost seems comfortable if not for the stillness of those bodies left in its wake. This is a world where violence possesses elegance and joy promises optimism regardless of how much further the boy must still travel. It’s the type of achievement that makes audiences remember an artist’s name.

Away played the Fantasia International Film Festival and hits limited release and online on November 29.