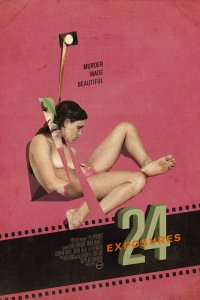 In trying to think of what contemporary American director supposedly has the most interest in what it is exactly that gets people off (at least outside the realm of straight-up pornography), the name Joe Swanberg would certainly ring at least a few bells. This couldn’t be more apparent than in his newest feature, 24 Exposures, which serves as a companion piece of sorts to Autoerotic, the prior collaboration with the horror duo Adam Wingard and Simon Barrett — a combination of their sensibilities, in that it took the interests in relationship drama of one to the comically grotesque points of the other. Even with the writing and acting help of his two aforementioned friends, it’s unmistakably Swanberg’s. The typical style, ranging from real-time to ellipsis; seemingly detailed compositions of living to mise-en-scène scrubbed blank; and emotionally “naked” close-ups of faces to bodies observed through technological prisms is always essentially attempting to get at the timeless as well as that which is distinctly of the 21st century.

This time, Swanberg’s reliably brisk runtime charts two narrative strands: a fetish photographer, Billy (Wingard, who probably has the precise facial hair for a pervert of his nature), specializing in gruesome murder simulations; and a cop, Michael (Barrett), the latter investigating the death of one of the former’s models. Both men have specific troubles with women: Billy manipulates them for titillation — even outside the confines of his job — his interests including making his girlfriend, Alex (Caroline White), and new model, Callie (Sophia Takal) ,take part in a threesome, while going out of his way to recruit new women for his pleasure, including an abused waitress, Rebecca (Helen Rogers). Michael, on the other hand, seems a perpetual sad-sack, coming off a break-up and unable to catch anything resembling a break of his own, to the point in one scene that he’s basically asking a series of people to solve the murder case for him.

So 24 Exposures is a film about Swanberg’s friends wrapped under a loose genre seal. That, alone, is the kind of quickie indie brushed off with maybe not-too-unfound accusations of navel-gazing, yet when giving its creator at least the benefit of generosity, considering what he wants to say to the degree of ignoring the missing sheen of a supposed “real movie,” questions we ask ourselves can be found in the ones he posits himself. Though Swanberg can’t be anyone other than Swanberg, even when supposedly doing a genre exercise — in this particular case, its influences being a late-’80s/ early-’90s erotic thriller, even if the only real aesthetic mark of that which it bears is in its winkingly heavy-handed score. (It still doesn’t like the usual ’80s parody signifier of the saxophone solo, for what that matters.) Yet this plays to his strengths: that he’s there, movie after movie, chiselling away at the same subject with the same set of tools, even if they, on the initial glance, seem to be veering toward something more particular but unearned.

And, as usual, playing a large part are Swanberg’s actress collaborators. They’re too big a presence to be truly objectified, as their point of view shapes the audience’s sympathy, and they’re free of a martyr standing in which they’d suffer for a point; these are complicated people on their own. Yet there’s a degree to which the film still feels ostensibly male; while certainly Billy and Michael’s idiocy and failings are put under a microscope, their perspective seems to ultimately be what has the most interest.

For example, when considering the Bechdel test — a system positing that a work of fiction must have at least two women talking to each other about anything other than a man to pass — this would be considered a failure, for the female characters primarily relate to each other through Wingard’s manipulation of them as his subjects. Yet, at least in the film wearing the improvisational, do-it-yourself nature on its sleeve, they’re allowed some leeway from the conceit.

As for the specifics of their objectification — or in this case, exploitation — however, Billy’s grisly photographs are intercut throughout the film, leaving the act of violence off-screen but its aftermath very apparent. These photos, while certainly not arousing, are meant to be perceived as presentation rather than condemnation; for Wingard’s character and, even, a few members of the audience, they’ll be of sexual interest. And that the audience for these photographs, aside from Wingard himself, is offscreen points to the containment and confrontation of the film. For all we know, Billy’s art is solely for himself, but in spending so much time with him do we become the audience for his impulses. At one point Billy states how, as an artist, he more or less just does things without thinking about them — in short, the horror director justifying misogyny and misanthropy under some pretense of art. In further substituting horror films for fetish photography, it’s stating that Wingard is, in fact, the auteur of his partnership with Barrett, the one making these horror films like his V/H/S installments as morally icky as critics like to accuse them of being. In the festival Q & A, Swanberg discussed at length Wingard’s sexual obsessions, including recommending to check out his Tumblr, itself a pretty blatant (and NSFW) display.

Though this premeditated confessional quality — basically Swanberg’s specialty (or sale) at this point — if narrow in appeal, is at least admirable in therapeutic aspiration for the way it’s completely stripped of vanity. Though, it’s questionable whether he seeks to actually criticize or just simply acknowledge; an occasional belief in just pointing out the perverse as an accomplishment in and of itself — a failure of too many films — perhaps lies in us, the viewer. Maybe we’re supposed to start the conversation with ourselves, and if Billy (or simply Wingard) can’t reach a conclusion for himself, then he may never.

Yet if, like said before, Swanberg keeps “chiseling” away — asking the same questions but with more experience and knowledge than the last time — he’ll maybe, one day, shape his masterpiece, no matter how much hard material there is to still get through.