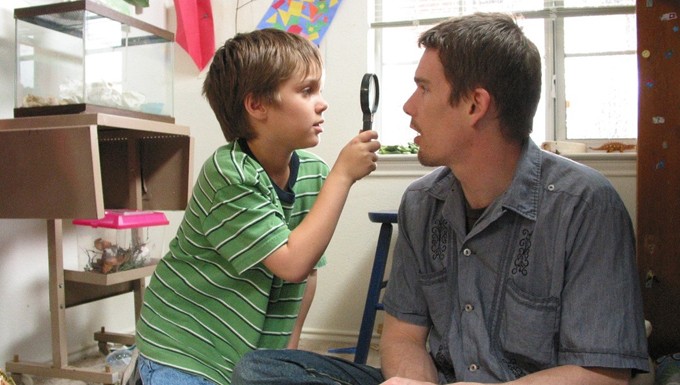 In just over a month, what’s sure to be the best film of the summer will finally be arriving, Richard Linklater‘s 12-years-in-the-making, coming-of-age drama Boyhood. In our review we said that “this is a film of many small moments, all added together to make something quite wonderful,” and today we have an in-depth look at how it was created.

Ahead of the release, IFC Films have released 18 minutes of behind-the-scenes footage which is broken up in chronological order. While we recommend saving the bulk of it for after you’ve seen the film (especially the last video), one can check out at least the first few years. Starring  Ellar Coltrane, Patricia Arquette, Ethan Hawke, and Linklater’s daughter, Lorelei, check it out below, see the trailer here, and then read our extensive interview with the director and his star here.

Filmed over 12 years with the same cast, Richard Linklater’s BOYHOOD is a groundbreaking story of growing up as seen through the eyes of a child named Mason (a breakthrough performance by Ellar Coltrane), who literally grows up on screen before our eyes. Starring Ethan Hawke and Patricia Arquette as Mason’s parents and newcomer Lorelei Linklater as his sister Samantha, BOYHOOD charts the rocky terrain of childhood like no other film has before. Snapshots of adolescence from road trips and family dinners to birthdays and graduations and all the moments in between become transcendent, set to a soundtrack spanning the years from Coldplay’s Yellow to Arcade Fire’s Deep Blue. BOYHOOD is both a nostalgic time capsule of the recent past and an ode to growing up and parenting. It’s impossible to watch Mason and his family without thinking about our own journey.