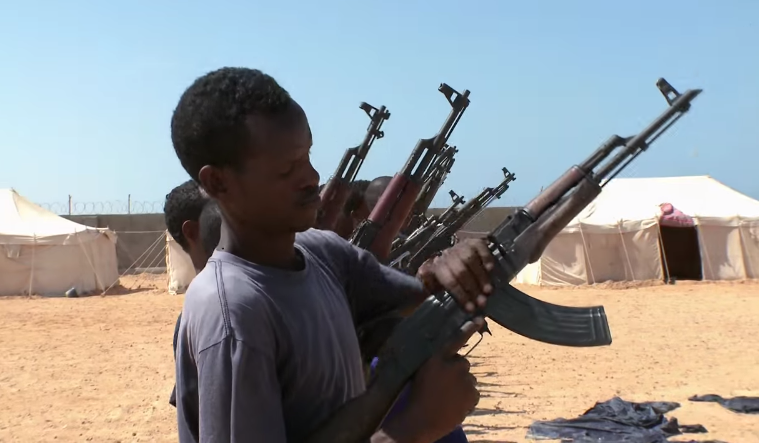 Exclusive Trailer For ‘The Somali Project’ Depicts the Battle Against Hijackers

After narrative films such as Captain Phillips and Fishing Without Net took a look at the hostage crisis in Somali, we’ll soon get a documentary exploring a specific angle. The Somali Project, which comes from directors Shawn Efran and Adam Ciralsky, takes a look at the creation of Puntland Maritime Police Force (PMPF), a group of private mercenaries who formed to battle the pirates and hijackers who are disrupting the country and its coastal waters.

Ahead of a festival run, it’ll be debuting on iTunes this Friday and today we’re pleased to premiere the exclusive trailer for the film. It sells a thrilling exploration of this difficult crisis as it looks at both the main subjects and those affected by it. Check it out below, along with the synopsis, poster, stills, and information about those involved.

The Somali Project begins with pirates capturing the merchant vessel Royal Grace and holding its crew for ransom. As the Grace’s hostages – and those from dozens of other ships – languish under unspeakable conditions, a Persian Gulf state quietly bankrolls a paramilitary force to raid pirate havens and free the captives. The controversial force faces mutiny, murder, runs afoul of the U.N. and eventually comes face-to-face with elusive pirates in an extraordinary battle captured on film.

About The Vladar Company:

The Vladar company is a media company, that carters to the market’s growing need for entertainment content across multiple platforms and focuses on developing, financing and packaging a library of intellectual properties with its producing partners at leading Hollywood production studios. The company is becoming a leading producer of many genres and multiple mediums in domestic and international markets (www.vladar.com).

The company is becoming a leading distributor of many genres and multiple mediums in US and international markets. Vladar has focused on creating and developing new distribution models, and contributing to the success of independent film.

Adam Ciralsky, co-director of “The Somali Project,” is the recipient of journalism’s highest honors, including three Emmys, a Peabody and a Polk. Having begun his career as a CIA attorney, he has spent the last fifteen years creating ground-breaking investigative stories for CBS, NBC and Vanity Fair, where he currently serves as a contributor. His prescient October 2014 story about covert tunneling into Israel and his one-on-one interview with Hamas chief Khalid Mashaal shed new light on last summer’s war. In November 2014, Voltage Pictures — best known for its Oscar-winning work on “The Hurt Locker” and “Dallas Buyers Club” — announced that it is teaming up with Ciralsky to transform his very first Vanity Fair article “Tycoon, Contractor, Soldier, Spy” into a feature film.

Shawn Efran is the co-director of “The Somali Project” and the founder of Efran Films. He is the recipient of a Peabody, a Polk, an IRE medal, two Emmys, three SPJ awards, an Overseas Press Club Awards, and other commendations. Before starting Efran Films, Shawn was a producer at CBS’s 60 Minutes, where covered stories from Afghanistan, Iraq, Antarctica, and the White House.

The Somali Project arrives on iTunes on October 2nd.