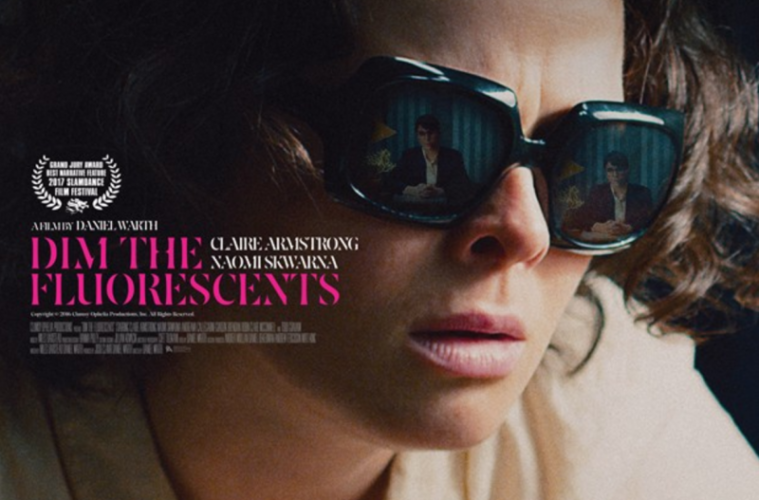 Premiering at the Slamdance Film Festival earlier this year where it won the Grand Jury Prize for Best Narrative Feature, Daniel Warth‘s Dim the Fluorescents creatively explores the artistic process through the peculiar avenue of corporate role-playing demonstrations. Ahead of a release this fall in Canada and the United States, we’re pleased to exclusively debut the film’s poster, designed by Midnight Marauder.

“Winner of Slamdance’s Grand Jury Prize, Dim the Fluorescents is the kind of dynamic, entertaining debut feature that hopefully puts its cast and crew on the map,” we said in our review. “Taking place in the city of Toronto – which is currently going through its own indie cinema renaissance – director Daniel Warth and co-writer Miles Barstead have put together a film that crackles with energy along its lengthy, surprisingly breezy two-hour-plus runtime. It’s a film about the struggle of making a living in the creative arts that’s bursting with creativity, zig-zagging from one tone, style, or form to the next at a moment’s notice.”

Check out the exclusive poster debut, followed by synopsis and trailer, for the film starring Claire Armstrong and Naomi Skwarna.

Struggling actor Audrey (Claire Armstrong) and aspiring playwright Lillian (Naomi Skwarna) pour all of their creative energy into the only paying work they can find: corporate role-playing demonstrations. When they book the biggest gig of their careers at a hotel conference, work commences on their most ambitious project to date and the ensuing tensions threaten to derail both the production and their friendship. As wryly funny as it is unexpectedly poignant, Dim the Fluorescents is a one-of-a-kind portrait of the artistic life and process in the unlikeliest of settings.

Dim the Fluorescents will be released in the fall in Canada and the United States.