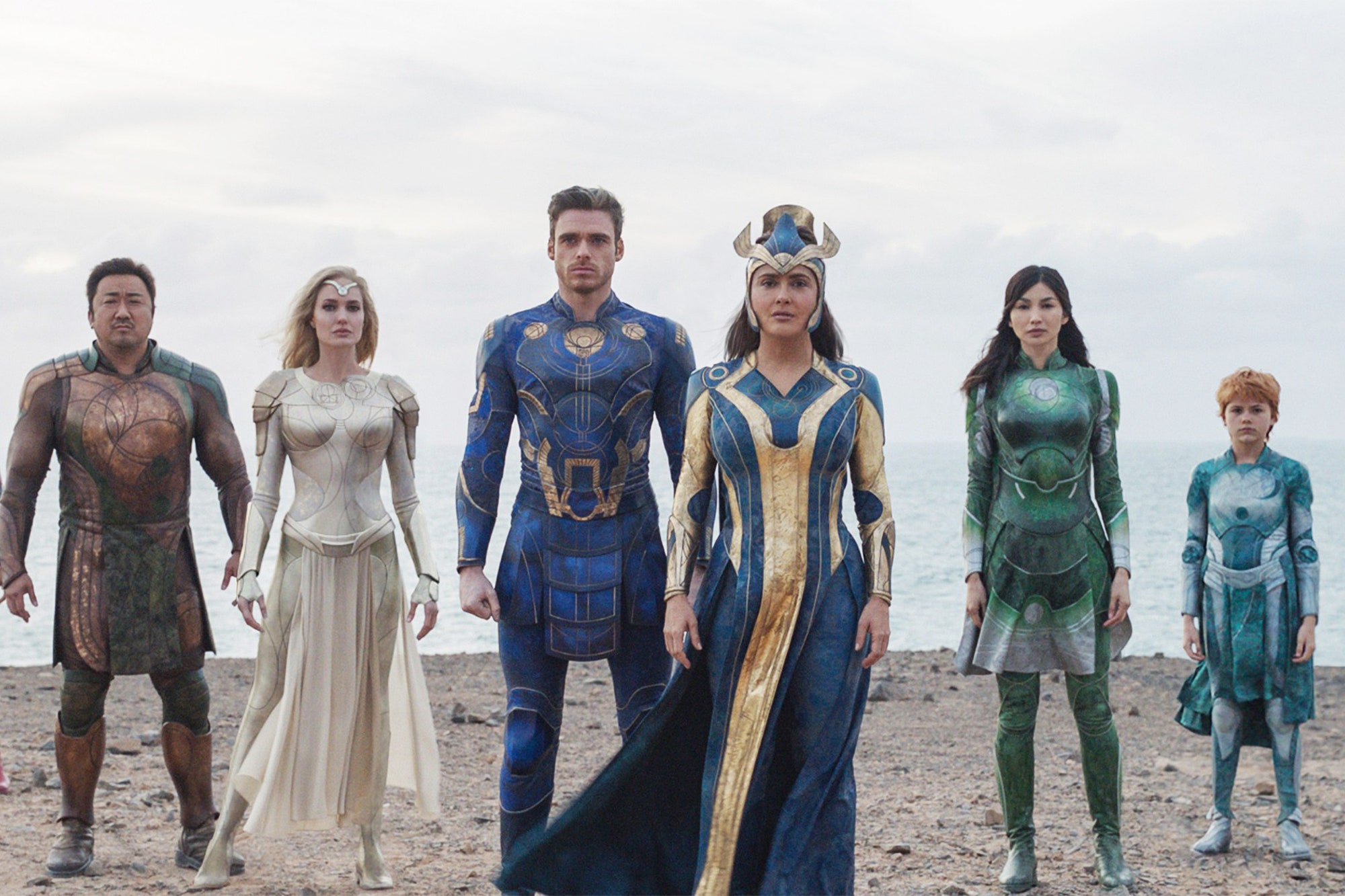 There may not be any eventuality in the Multiverse where Eternals works. It feels like deep-cut source material not mined for adaptation out of desire, but a necessity to keep the engine running. Despite her reportedly unique pitch, co-writer and director Chloé Zhao’s involvement seems almost like a lark after coming out the other end, save a handful of interesting points her film offers up. Regardless of on-location shooting or dalliances with something resembling pathos, Eternals is unmistakably Disney above all else.

Following the eponymous group of cosmic entities, we see our heroes (?) influence life on Earth, from the fabled gardens of Babylon to the very real devastation of Hiroshima at the behest of an all-powerful (if detached) creator named Arishem. If it seems historically significant, they had a hand in it—for reasons benevolent and otherwise. Much like their mythological counterparts, the Eternals are intrinsically emotional beings falling into love, melancholy, even madness across seemingly interminable lives.

An emotionality is clearly the most enticing thing for Zhao, who tries to layer something real onto the cosmic scope of the universe these beings inhabit. It’s an earnest, admirable attempt that collapses under the number of threads and characters a lumbering script takes great pains to realize with any dimension. A measure of this laborious plotting does bear fruit, however: we’re treated to this franchise’s most sweeping attempt at a lush romance containing both stakes and (surprisingly) sensuality––albeit by MCU standards. What surrounds it are broader, not wholly uninteresting platitudes on existence and lesser evils delivered in dulled costumes by commendably diverse faces.

Though the diversity in front of and behind camera is more than welcome (and necessary), Disney seems not to wield that initiative as a force for change but as a shield from would-be detractors. Not one to sit back and give sway to true innovation, the company hedges on a specific brand of feigned progressivism; they’re intent on co-opting pure motives to cynically churn out the cinematic equivalent of “I’d Like to Buy the World a Coke.” In that meat-grinding process, Eternals‘ central tragedy isn’t the imminent destruction of life on Earth or humanity’s contradictory capacity for evil and good—it’s that those front-and-center are exceptional talents who deserve better. Zhao can wring something from each member of her cast because they’re all total pros. If both characters and scope (particularly in some of the third act’s final shots) have awesome potential, the tank has run dry as Eternals flirts dangerously close with nearing three hours. This gripe is not solely native to the MCU, and films can be however long they need. That said, I am begging studios to rediscover the beauty of a well-placed intermission.

Though not an entirely colossal failure, Eternals has a Sisyphean problem with authenticity: the greater its attempts at specific, deeply felt connection, the more it feels like a broad, insecure, corporate pander. It becomes increasingly tough to appreciate the handiwork of Zhao or her cast when you can imagine Kevin Feige singing “It’s the real thing!” under every ersatz Terrence Malick tableau. Should Zhao’s dealings with Feige and company yield five more Songs My Brothers Taught Me or The Rider, then frankly Eternals is worth it. Even with that level of cautious optimism, the whole enterprise remains a supermassive black hole not even a light like Chloé Zhao can escape.