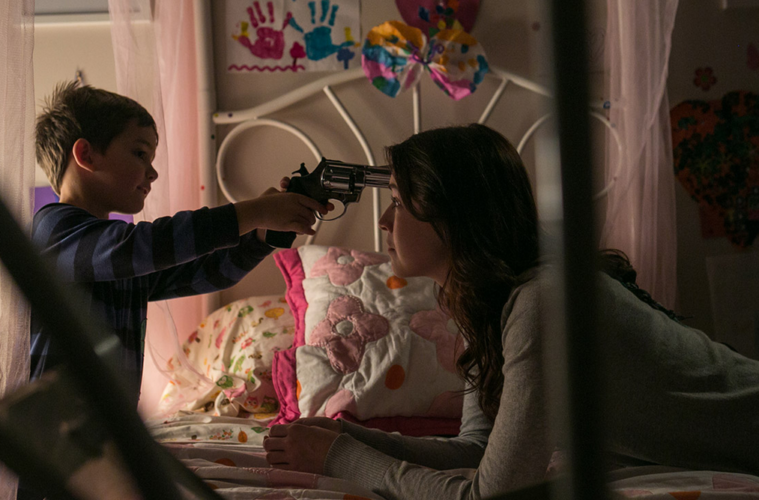 Director Michael Thelin’s Emelie had been my most-anticipated picture of the Tribeca Film Festival for reasons that are purely unique to any feature at the festival this year. In the interest of full disclosure, I had a front row seat for much of filmmaking with two credits on the picture — Assistant Editor and Second Assistant Camera — and thus, sitting down with Thelin we had the opportunity to reflect on a process we both had witnessed from our different vantage points.

While my baggage makes me ineligible to provide a formal review of Emilie for the sake of my ethics, the film delivers true psychological terror from the slow burn of its first act to its tense third act. A sudden abduction of young women in the film’s restrained opening scene hints at the menace to come. Sarah Bolger’s Emelie is called at the last minute to replace the Thompson family’s usual sitter and as the night continuities her carefree games evolve towards the psychologically destructive.

With strong performances by Bolger as well as Joshua Rush, Carly Adams, and Thomas Bair as the Thompson kids and a script with several bizarre and disturbing moments (by Richard Raymond Harry Herbeck – yes, he’s one person), Emelie is one to seek out. We sat down with the director to discuss his process and the quick turn around; having shot Emelie last October, Thelin is premiering his picture at Tribeca.

Congratulations again on the picture – how did it come about?

Well, I hired the writer [Richard Raymond Harry Herback] for some other projects and he showed me a short story he had and immediately the idea of someone showing up who wasn’t the real babysitter just floored me and I’m like, “We have to run with this.” So he and I put our heads together and we went crazy. We just started jotting things down – we could do this and we can go here. We fleshed out an entire beat sheet for everything we had had along with a treatment and character analysis and he went away and made it happen – put pen to page. And here we are.

How did it evolve during that process, was it always contained?

No, it was always self-contained. We thought it would make no sense to drag it out – that they’d stake out the house for several weeks and they stake out Anna. It’s all the moment – boom, they do it and we see the whole repercussions of the events that take place in the house. To me that was way scarier to keep it contained to just one night.

What was the casting process like? As you mentioned at last night’s Q&A there was a last minute change that had an effect on your process.

Sarah [Bolger] being cast we the biggest godsend. She’s amazing. We call her one-take Sara and she’d always give us something different if we needed it. The kids. we had a dilemma. 72 hours before we started shooting, we ran into some permit issues and we recast them. I had 24 hours with the kids before we started shooting, which maybe is even unheard of, but again I think there’s a lot of things that were unheard of. We ran with it. I had amazing help from Sabrina [Stoll, the director’s assistant] who was on set really wrangling these kids and coaching them. She was just amazing too. So making sure I surround myself with the best people possible to make these kids feel comfortable to give those performances is what you see on screen. We were blessed.

I imagine it was a challenge with the prep time lost and you had to just run with it.

Yeah, I did a lot of prep time on my own before even casting. Dealing with kids, directing kids – I’ve directed kids in the past so that was an advantage but again, not this extent, not for 20 days or a feature film, an entire story arc. Really understanding how kids think and getting in their minds and their attention span, we worked so hard with the kids we initially had, so when we had recast, iit could have been demoralizing but instead I looked at it with my team and said, “This is what’s supposed to happen.” With having 48 hours to cast and 24 hours to work with the cast, what we were essentially shooting were the rehearsals. The large amount of catastrophe of getting robotic, stiff performances, it just wasn’t there. We had to let the kids be kids and we adjusted accordingly including the script.

How did you prep with Sarah Bolger? It’s certainly a deeper character study than its premise suggests. The character development works because you don’t immediately spell it out for us.

Right. Michael Myers – he’s a great bad guy, he’s got the mask. Jason Voorhees, he shows up – yeah, he’s going to kill you. But I feel like she brought these three dimensions to a character that could have easily been one-dimensional and she could have easily just been bad. But I don’t see Emelie is a strictly a bad person. Yes, she does bad things but I really think she’s a tortured sole, and Sarah embodied that beyond the genre – she took it to another level and took it to another level and not because it was easy. We had a lot of talks, especially when she came into town and really diving deep into whom this character is and what she’s going to be doing because she doesn’t have kids, she’s never lost a kid. She’s never gone though any of this stuff and she nails it. One-take Sarah and she nails everything and gives me something different every time if we need it.

I know we talked about influences before. I feel perhaps Michael Haneke is one in terms of the framing and use of longer takes, and I think there’s a way Luca Del Puppo composes a shot where certain information is just slightly off and it adds tension to the frame. How did you prepare with him, what were some of your references?

Luca and I talked a lot about how to shoot this. We wanted to keep it simple, nothing over stylized but yet the film has a lot of style when you look it frame by frame. Luca has the most impeccable composition skills of anyone I ever worked with. It’s almost like still photography every frame, but we talked about stuff happening outside of the frame and using the frame to our advantage, along with cutting people off at the neck sometimes. It’s kind of morose and adds to the tone of what we wanted to set. Yes, Haneke is definitely an influence, like Funny Games, but also Let the Right One In and Halloween and Goonies. There’s so many random movies channeled through one voice, which is mine, to make sure it was the right tone so we didn’t have 15 tones. That’s where we’d go wrong, if we had 2 or 3 different tones. So visually everything was calculated. We didn’t have a lot of prep time but yet it was still amazingly calculated. I boarded out of a lot of things for inspiration but at the same time boards only go so far because there may not be a wall there when you’re scouting a location. So the fact Luca and I spoke so much before hand, there was a second hand, so he knew this is where we want to frame this and I was like “Yup, that’s perfect.” There was a lot of premeditation that went into every frame. Let’s talk about editing. Full confession, I’ve seen the raw dailies of course and last night I was really blown away by how well the first act works to slowly set up the tone, can you talk about that rhythm in the editing process?

The first act is a slow burn so you get nervous if people will stay with it, but that bathroom scene [where Emelie asks the eldest son to get her a tampon] is just so iconic that Sara just speaks to him in such a nonchalant way. I can go on and on about how good she is. But the editing process: our first cut was only 94 minutes. The takes were a little more drawn out, they were a little more Haneke-esque, but the fat started to melt away once we laid into it. We shot this in October, we’re talking in April. This is insane, that’s really really fast. In less than six months this whole thing was done. We’re talking soup to nuts.

How long did you work with Rich Herback on the screenplay?

That was two years ago. It came out and went through a few incarnations but it wasn’t anything fundamentally different, but there are always little things that changed here and there.

You shot the film in Buffalo, the hometown of your writer Rich Herback. It’s a city that really love its filmmakers tremendously. What was it like working there?

The Buffalo people were so cool. They do their own thing at their own pace, but it’s cool, it fine. It’s not a New York pace, it’s not an LA pace — it’s a Buffalo pace, and the sooner you embrace the better. And people like to poke fun a little bit that there’s nothing to do, but I disagree. I had a really great time there. The production itself was so stressful that Buffalo was kind of nice because Buffalo is not a stressful place. And I think that added to my sanity – because you know how production was! You take that and I was really happy we shot in Buffalo. I think we shot it anywhere else it might have been really toxic because there might have been more distractions versus the everyday distractions you get on a production. I’ve recommended Buffalo to a lot of a lot people looking to shoot films.

Thanks so much for sitting down with us. Good luck with the film and I’ll see you around the festival.

Emelie is currently screened at the 2015 Tribeca Film Festival.