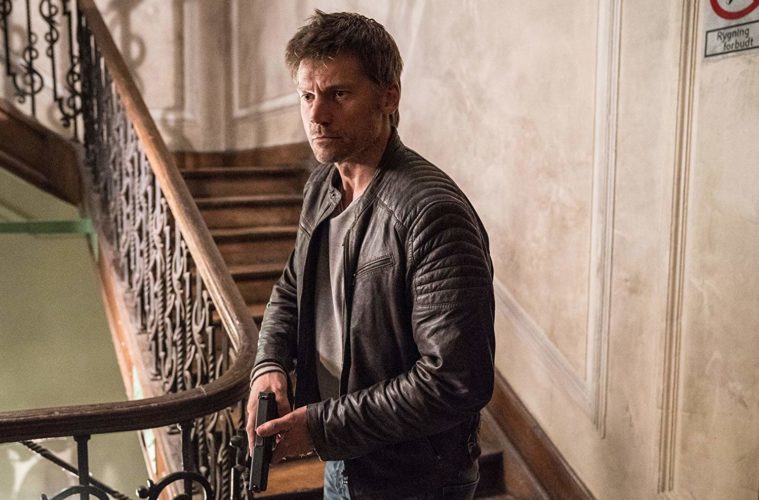 Even more than his studio-dominating, awards-securing, and fiercely independent (or so the canonized story goes) New Hollywood contemporaries, it could be said that Brian De Palma (save one or two studio jobs he’s since downplayed) makes movies exclusively for himself. His interests so clearly front-and-center, appreciation has become a kind of plug-and-play auteurist game: the pieces–the split diopters, slow zooms, split-screen, POV shots, etc.–are ready to run, spark a smile or a groan, and spur comments about the nature of voyeurism, visual storytelling, etc.

It’s tempting, and not exactly inaccurate, to commend Domino, his first feature since 2012, by winnowing down myriad complications to the notion that merely looking at it is to feel his presence. But what are we looking at here? Impulses to just review what’s on the screen–in the case of un film de Brian De Palma, the screen, the screen-within-the-screen, for all I can tell maybe the screen-within-the-screen-within-the-screen–probably can’t cut it. If the director is hardly one for behind-the-scenes discretion (look no further than Julie Salomon’s The Devil’s Candy for a nearly second-by-second account of distended disaster), it only further solidifies the wide scope of a troubled career that his first time behind the camera post-rep-mollifying doc led to pulling no punches while against the ropes. It might sound like I’m working overtime to contextualize (i.e. justify) a DTV thriller, but words from on high make it a slight surprise I’m reviewing this thing at all:

“It was a horrible experience. The film was underfunded, it was far behind, the producer did not stop lying to us and did not pay some of my crew. […] I was in many hotel rooms waiting for the money so that we could continue shooting. I was in many fabulous cities, waiting in hotel rooms. I was here a hundred days in Europe, and shot thirty. However, somehow we managed to make a movie out of this completely chaotic production situation, and hopefully you’ll be seeing it in your local cinemas sometime in the future. I have no idea when this movie will be released. I’ll find out when I read it in the papers like everybody else.”

Get into word of multiple cuts–potentially one hour was shorn from a now-slim 89-minutes-with-credits runtime–and you’d honestly walk into this thing tabula rasa? Holy mackerel. But excepting the chance someone gets a hold of De Palma (I asked; no luck) and finds the straight answer, this is it. Work with what’s on the screen.

So: Domino. The latest from Brian De Palma hits film culture not unlike a moody son trudging to their graduation party at a parent’s behest, a master of big-screen compositions relegated to VOD for those who bother plunking down. That tussle between pedigree of talent and nature of distribution foretells the chaos within: at one moment lit like a Home Depot model living room–a fault I’m more willing to chalk up to incomplete post-production, less likely to blame on Pedro Almodóvar’s longtime DP José Luis Alcaine–the next photographed and cut as if an old pros’ sumptuous fuck-you to pre-vis-heavy and coverage-obsessed action-filmmaking climate, the next maybe just an assembly of whatever master shots the team could scrounge together during those 30 production days. To these eyes it’s a chaotic joy; nearly malicious, deeply serious about the wounds of contemporary terrorism, and smart enough to pull off a mocking of the circumstances around those fighting it.

I have seen Domino twice and express little reservation saying its plot, courtesy of scribe Petter Skavlan, rests somewhere between formalist window dressing and outright catalyst for those plug-and-play habits. Be even a little versed in De Palma and you know what’s to come: God’s-eye (or director’s; same difference) surveillance shots, split screens as an actual plot device, a melodramatic thread over which to lay molasses-thick Pino Donaggio cues treating much of this as a big joke; the plot-setting incident being yet another assault on a stairwell.

Make no mistake, it’s mostly staged for campiness. More often than not that De Palma touch is zooming in on the specter of terrorism until it can find something ridiculous, heightened, thrilling in their possibilities. The rub is that Domino comes into a world with too many scarring reflections of itself to sit right. How amusing that a director so fascinated with the voyeurism-violence dichotomy would make a terrorist thriller about insurgents using the power of propaganda. Its own protagonist (Nikolaj Coster-Waldau, carrying a blankness that lets every expression running across his face draw the movie’s emotions in even bigger lines) makes note of their formal sophistication: “even a drone shot!” But the movie’s high-wire act between gawking and actually showing can suddenly yank any fun from our grasp. Safe to say that watching Domino less than a month after the livestreamed Christchurch massacre–among the best warning signs of how deep into horror our world’s being brought–makes for one of De Palma’s few setpieces wherein aesthetic pleasure stings like sin.

Many will instead reduce it to schlock. And it is sometimes difficult to take De Palma, who Pauline Kael once described as having “an alligator grin” at the possibility of blood and guts, so seriously when he’s wearing the clothes of an entertainer. Domino may not take itself that seriously. Compare it with Redacted, which proposed a greater reckoning with terror, image-making, and their mutual dissemination–nothing there quite like a Cajun-accented Guy Pearce, in a final scene composed like an actual stage exit, summing up CIA business with a curt “We’re Americans; we read your emails.” But when nothing exists inside a vacuum, ignoring real-world analogs feels outright irresponsible. Key to the immediate experience is having fun with its loose ends: tomatoes as a clunky, nevertheless not-harped-upon symbol of globalism; the fact that it starts on June 10, 2020, one day after the opening scene of Mission to Mars (good fucking luck there); a wife having crutches seemingly so she can drop them in shock when her husband is put in a coma; a seconds-long cross-fade probably the result of post-production tinkering that, still, underlines the hairy interplay between government agencies and outside-the-law operation.

How strongly one’s able to let in its misshapen, cracked-mirror psyche while forgiving behind-the-scenes circumstances may be the very stuff of late-career appreciation. Which is to say: appreciation that they can collect enough producer’s checks (bounce-ready or not) to do some, if not always enough, of what they’re better at than anybody making films right now. Whether a minor or unfinished work, it’s good to see the old man flex some muscles.

Domino arrives on VOD and in limited theaters on Friday, May 31.