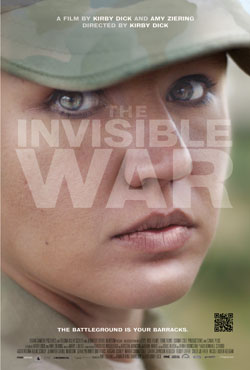 “I want to serve my country.” That’s a statement that carries a lot of pride and is a testament to how people will offer their time, body, and mind as a sacrifice to the greater good. But within America’s armed forces is a dirty secret. Where commanders can be judge, jury, and executioner, justice can die at their hands, and there is saddening evidence that rape has become a staple crime that often goes unpunished. Women are vastly outnumbered within the military and there is a “well, what did you do to cause this?” mentality that is troubling. The machismo and pride of our armed forces bleeds through in numerous commercials, but women should not be offered on a silver platter if they want to serve their country as well. This is the heart of Kirby Dick’s The Invisible War, a heartbreaking documentary on the results of the terrible actions of some of those that serve our country and the injustices within the system. Of course, rape doesn’t just happen to women, and where men are surrounded by other men, a few unfortunate souls have been trapped and caught in a world that immediately becomes homophobic when dealing with the sexual assault of the male on male variety. The real impact becomes not just that these servicemen and women go through rape, but the fact that there is rarely if ever any justice served. In fact, shockingly, it goes the other way, with 92% of women that file complaints of rape being discharged later on. Those stats, by the way, are from the government’s collection of data. Despite this damning evidence most of the armed forces have their heads in the sand.

The real injustice comes about because those commanders that are in charge can kill any kind of criminal investigation. The armed forces is supposed to serve justice within the ranks without any outside interference. You don’t get an impartial jury of peers. You get a military hearing. The commanders would also have to answer to their higher ups if they had to report the rape that occurs under their watch. Which means they have incentive to simply sweep things under the rug so they can keep their rank and pay grade. And as a Marine or any other branch of the military, you have no further action to take. You can’t seek a civilian court case for something that was dismissed in the military.

The more heartbreaking thing is to hear each one of these servicemen and women express that they love their chosen branch of the military. They each have thoroughly enjoyed serving their country, but they are now disenchanted with the entire thing. One woman even warns a civilian who starts talking about how she is thinking of going into the armed forces at a restaurant. Everything within the 90-minute runtime builds a steady case of how far up the corruption in this goes. But there is a troubling moment when a character reads her unused suicide note that feels a bit too much. By now they have won you over with these brave souls’ tales and there are few people out there that would shrug their shoulders at rape. Despite the misstep, the documentary leaves a lasting impression. While 20% of servicewomen report sexual assault while serving, the numbers likely are even higher. Rape is still a taboo subject in modern culture, no matter how much it is disliked. There is embarrassment for the victim because some ignorant people will ask damning questions like, “What were you doing alone? How could you have avoided it?” The fact is that these crimes should never happen. Should a female servicewoman be expected to walk with a fellow serviceman 24/7? And if that trusted serviceman is the assailant? National statistics estimate that a fraction of sexual assault is actually reported, which means that 20% is not the reality but just those that speak up.

Nothing will make the pain of these women and men go away. But receiving justice within the armed forces should be a given. These are people that they trusted. These people protect our shores and are stationed overseas. Some guard the highest levels of government and even the president. Strong evidence shows that sexual predators are not one-time offenders. They are repeaters, and within the confines of the armed forces, they are able to get away with their crimes again and again. Some don’t fall through the cracks and are rightfully punished, but many more receive nominal punishments that simply don’t fit the crime. The fact that The Invisible War exists with the intention of sparking change is sad—there’s no excuse for how slow the military has been to fix this—but I’m glad Kirby Dick was at the helm.