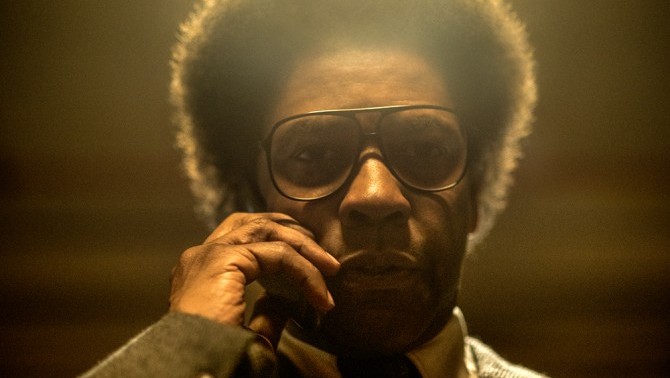 After crafting one of the best directorial debuts of its respective year, Nightcrawler writer-director Dan Gilroy is back with a Denzel Washington-led crime drama-meets-character study. Shot by Robert Elswit, Roman J. Israel, Esq. premiered at the Toronto International Film Festival and ahead of a fall release, the first trailer has now arrived.

We said in our review, “Roman J. Israel, Esq. defies expectations at every turn. It stars Denzel Washington, but this is not the suave, in-control character the actor’s known for. Instead, the title character is a socially awkward, anachronistically dressed misfit. It’s a legal drama, but eschews the epic courtroom scenes and shocking turns that are the genre’s hallmarks. Israel is the anti-Michael Clayton. It is writer-director Dan Gilroy’s follow-up to the deliciously nasty Nightcrawler, but no thriller. Even the poster misleads: released the morning of the film’s world premiere screening at the Toronto International Film Festival, its central image — the back of Washington’s head and upper body, decked out in a 1970s suit and wearing dated headphones — implies that the film takes place decades earlier. In fact, it is set in 2017.”

Roman J. Israel, Esq. is a dramatic thriller set in the underbelly of the overburdened Los Angeles criminal court system. Denzel Washington stars as a driven, idealistic defense attorney whose life is upended when a turbulent series of events challenge the activism that has defined his career. Colin Farrell costars as the ambitious, monied lawyer who recruits Roman to his firm.