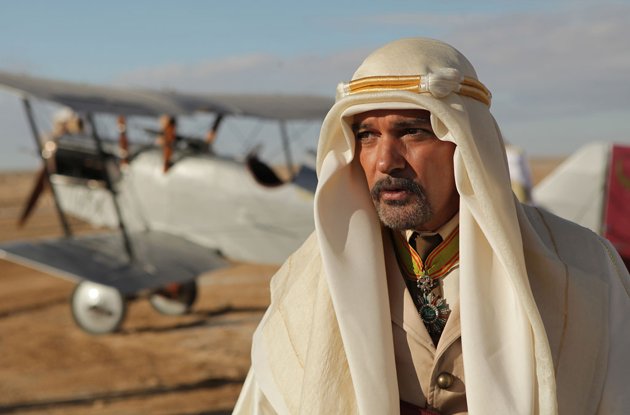 When a seemingly epic production that attempts to be a cross between Lawrence of Arabia and There Will Be Blood begins its run on VOD, it’s never a good sign, but we’re still holding out hope based on talent alone for Day of the Falcon. Previously titled Black Gold, the film comes from Jean-Jacques Annaud, who previously delivered other Enemy at the Gates and Seven Years in Tibet.

After a first look and international bow, a domestic trailer has now landed which includes a few entertaining moments and some gorgeously captured locations, but the drama doesn’t look to be there. With that said, the talents of A Prophet‘s Tahir Rahim, go-to villain Mark Strong, as well as Antonio Banderas and Freida Pinto may sway us to try and catch this one. Check out the trailer and poster below.

Starring Antonio Banderas (Desperado), Mark Strong (Zero Dark Thirty), Freida Pinto (Slumdog Millionaire) and Tahar Rahim (The Eagle), Day of the Falcon is an epic film that tackles honor, greed, betrayal and love between rival kingdoms. Just as the two groups cease to fight after years of bloodshed, oil is discovered between their territories, reigniting their once violent past. It’s now up to their children—young lovers who married in hopes of bringing the families together—to find a way to end the violence and to bring peace to the land. Day of the Falcon hits VOD on February 19th and is in theaters on March 1st.