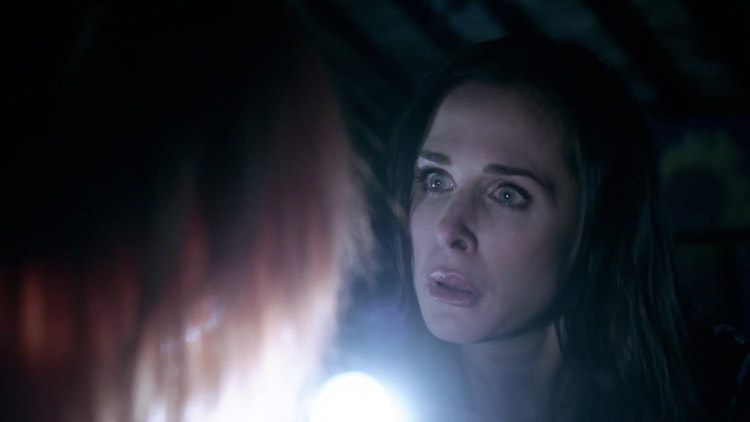 Any slasher movie requires a great scream queen, and in the case of Curse of Chucky, it has three of them; Fiona Dourif, Danielle Bisutti and Chantal Quesnelle; the first two playing the daughters of the third, who all happen to be terrorized by Chucky in their original family home. But the particular theme of family takes on extra meaning when considering that Fiona Dourif is in fact the daughter of Brad Dourif, the classic voice of Chucky, who returns for the sixth installment.

I sat down with the three ladies to discuss their welcoming into the franchise at the Fantasia Film Festival, where Curse of Chucky had its world premiere.

This is for Fiona, did you see Child’s Play as a kid and did it make an impression on you…

Fiona Dourif: Knowing that my father was the voice of Chucky? I was at the premiere of Child’s Play when I was seven or so, that happened. I don’t think I stayed in the theatre, yet having my dad as the voice of Chucky was something that I marketed myself as [laughs]. In grade school and high school to get attention from boys I thought it was very cool.

On that note, when you’re acting in this film and taking into consideration the legacy of this horror icon, does it make it easier and more inspiring for the more mundane days on set where you’re acting with a puppet?

Danielle Bisutti: Yeah, I think there’s a certain calibre and bar that’s been set, and we’re were just discussing this, but whenever you’re doing horror, there’s a certain level of exhaustion having to be screaming, crying, take after take after take but definitely the legacy sort of prevails like all of it, like hovering over it is this certain level of expectation that we all really committed to, and probably moreso for Fiona than all of us.

Chantal Quesnelle: I didn’t really have all that many scenes with the actual doll, just at the beginning when it arrives at my home, but for me it was more that the script around the family tied it, it’s such a strong family in this script.

At the beginning of the film you get the impression of this very fraught mother/daughter relationship, I’d love to see a whole movie of that, but did you work together to create a further backstory for them?

CQ: It was interesting because I met Fiona and her dad the night before we started shooting and organically we just kind of clicked, we didn’t really create any kind of backstory.

FD: Yeah, it sort of happened. Also, there are elements of that are a little true for me in real life [laughs] so I understood the relationship pretty well.

Does Don [Mancini] as a director pull tricks on all of you to get you scared or manipulate you in certain ways?

DB: There’s a real symbiosis and I think we all did our homework and brought a certain take on these characters and Don had a really gentle way of doing it. He has a very specific way of doing it, he knows exactly what he wants, which is why he’s a master at what he does. But there’s a specific reason as to why he cast all three of us women in these roles.

FD: Toward the end when it was just me and the puppet, it got tiring. It was super fun but he would yell at me, we became good friends and I loved working with him but he would yell at me “Creepier Fiona!” or “Open your eyes wider!” or “With creepy trepidation!”, which became an ongoing joke. [in slow voice] Creepy trepidation; it’s like I get it!

This is one of the most female centric horror films I’ve seen in awhile; was there a certain kinship on set?

DB: We all got along really wonderfully, we’re missing Maitland [McConnell, another co-star] and I didn’t get to work with Chantal, but we’re falling in love this weekend and I’m a big fan of her work after watching her. But me, Maitland and Fiona sort of called ourselves The Witches of Winnipeg, like a Witches of Eastwick moment happening where we love each off-stage and on so that we got along together really well.

This film is primarily set in one location, the house and did it feel like another character in the film to you?

DB: Definitely, this is the house of our upbringing, where we spent all of our formative years and it definitely lent itself to that familiarity. Also, the pains that may happen from childhood maybe burrowed or etched itself into pieces of furniture. There’s this one scene that got cut where the car pulls up and my character gets out, and just from looking up to my childhood bedroom, a flood of emotion came up to me, which is how it was written in the script and I had these tears. I thought that was sort of a nice thing, Don is very specific, about these characters and the interwoven backstory.

FD: Yeah, I think the house was designed with a lot of intention; Don wanted it to be a character in the movie and the production designer was very talented. The house was built, it was a two-story house with a working elevator in the middle of a soundstage, it was beautiful; so many textures.

DB: The elevator was emotional I thought, just the different wheelchairs, I just liked the stories that those inanimate objects could tell.

CQ: When you’re on set, there’s a lot of navy blues and purples, like a fresh bruise, and I’m glad those colors translated onscreen. I felt like I was in a fresh bruise.

Tonally the movie is all over the place, in a good way, because there’s comedy, horror, melodrama, was this something you felt on set?

DB: Yeah, it’s got everything! It’s got the gore, it’s got the humour, it has that sort of deep dramatic family dynamic.

FD: Yeah it was really, really well written; it had four characters and also humor, I mean Chucky is such an asshole who’s got these great one-liners, it took itself seriously but not too seriously.

Have you all done horror films before?

CQ: This might be my first true one in the horror genre, I mean I grew up as a teenager loving horror films but this is the first real one  I’ve been in.

DB: This is my first and I will be in the next Insidious, Insidious Chapter 2, I’m playing the lead spectre in that and I’ll be scaring people hopefully for years to come [laughs].

It’s not necessarily my favourite genre per se, although I was a big Twilight Zone and Hitchcock fan, and of course Freddy Krueger, I don’t know why, tortured my sleep as a child, but yeah it’s great to be in this legacy.

FD: I was more excited to be part of this than I was ever excited about anything in my entire life, and totally terrified at the same time. Curse of Chucky screened at Fantasia Festival and hits VOD on September 24th and DVD on October 8th.