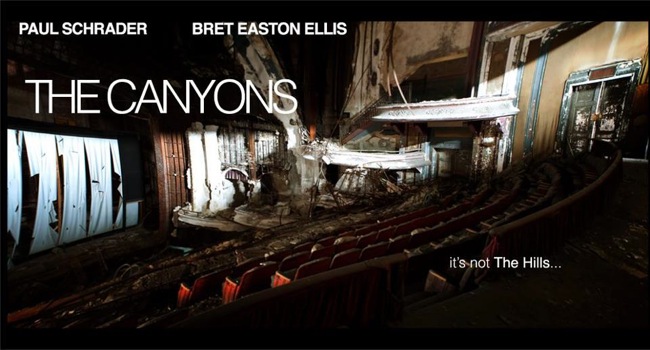 Crowdfunded Cinema: ‘The Canyons’, ‘Out of Print,’ ‘Teenage Scream’ & More The Gist: A contemporary thriller, featuring five twenty-something’s in modern day Hollywood, in their quest for power, love, sex, and success.

Why it Should be Kickstarted: What is perhaps most exciting about this project, is the writer/director collaboration of Bret Easton Ellis (Less Than Zero, American Psycho) and Paul Schrader (Taxi Driver, Raging Bull, Auto-Focus). What’s also intriguing is that the two are seeking funds to retain complete creative control, avoiding financing and institutional censorship. It allows for immense potential, and an undoubtedly interesting project.

Most Interesting Reward: The opportunity to help cast the film, with a private link to vote on the casting finalists. ($10) The Gist: A documentary focused on the New Beverly Cinema, exploring the historical and nostalgic significance of the theater, while also investigating the struggles that revival theaters face.

Why it Should be Kickstarted: The New Beverly Cinema has had a number of significant cinematic figures pass through it, so depending on who they are able to get in term of commentary, there could be interesting stories to be heard. Additionally, it addresses the conflict that many revival theaters are now facing, in that major studios have stated that they intend to withdraw their 35mm prints, which would bring this type of cinematic experience to an end.

Most Interesting Reward: An assortment of prizes, including a copy of the original soundtrack of the film by the band tokyoidaho, a copy of the finished film on DVD, and a thank you in the credits of the film. ($100) The Gist: A short film, done in the style of 80’s horror films, serving as a throwback to the era.

Why it Should be Kickstarted: This film looks like it will be good fun; the filmmakers are young and passionate, and seem like they could really experiment within the genre. It will be interesting to see what they employ to differentiate it from other horror films.

Most Interesting Reward: An assortment of prizes including a instant download of the movie script, a printable/foldable TEENAGE SCREEM house, name in the credits of the film, and exclusive foldable doll of film character. ($100) The Gist: A documentary that tells the story of a young Palestinian on the Gaza Strip, with the goal of shattering the Guinness World Record for the most kites ever flown.

Why it Should be Kickstarted: In a war-impacted region, it inspiring to see youths coming together for such a spectacular event, sharing joy in such a simple pleasure. The film is also being produced by a team of young filmmakers in Gaza, which lends a nice perspective to the piece.

Most Interesting Reward: An assortment of prizes including a director’s cut with behind-the-scenes footage of the film on DVD. ($250) The Gist: A young Mexican woman goes to Cuba following the suicide of her brother, working through her grief by visiting the place he had always dreamed of going.

Why it Should be Kickstarted: Writer/director Kelly Daniela Norris pulls inspiration from her own experience of bereavement, it what looks like a touching story of love, and how one comes to terms with loss. Death of a loved one is quite jarring, leaving one trying to find peace amongst pain, and this film looks to explore that process in a very personal way.

Most Interesting Reward: San assortment of prizes including a Special Thanks credit at the end of the film. ($100)

Have any Crowdfunded Cinema suggestions? Comment below or e-mail us.