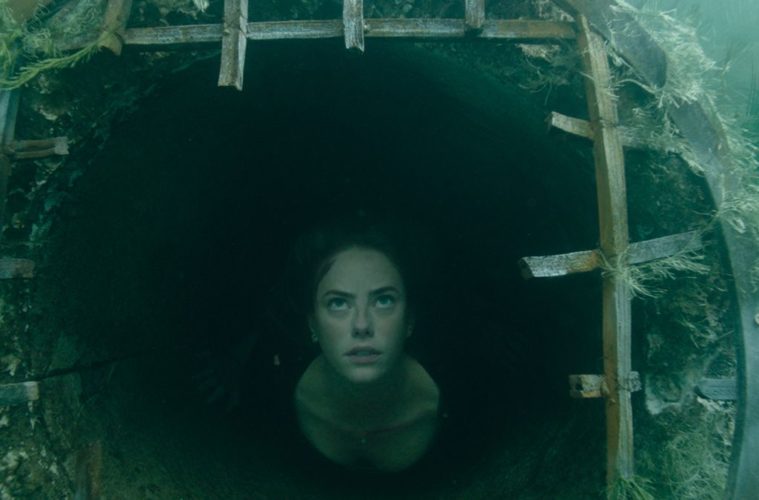 After forays into horror-comedy (Piranha 3D) and dark fables (Horns), New French Extremity director Alexandre Aja comes full circle with straight-forward, gnarly horror in Crawl. A precise and tense midsummer sandbox picture, Crawl allows Aja’s fixations on viscera and tension to bare their sharp teeth in a single space, recalling his earlier work (High Tension, The Hills Have Eyes) through sheer tempo and intensity, all while maintaining a father-daughter (and dog) narrative with just enough heft and sincerity to resonate.

Haley (Kaya Scodelario) is a college student in Florida whose scholarship rests on her ability to competitively swim. As a category 5 hurricane begins to shake trees and flood roads, Haley goes looking for her father, Dave (Barry Pepper) who has been suspiciously M.I.A. Haley arrives at the first of her father’s two houses (due to a recent divorce) and here she finds only his dog, Sugar, and some old memories that stir both nostalgia and the bitterness it often creates.

After some digging for clues and some canine help in the second house, Haley finds Dave knocked unconscious in the crawl space with a fresh set of gashes on his chest. Little does Haley know, her dad isn’t the only thing sprawled on all fours in the basement. Soon, Haley, Dave, and Sugar are stuck in a house with some extremely aggressive alligators on the hunt, all while contending with a raging hurricane that seems intent on washing whole swaths of mankind clean from the Earth. Swimmer versus gators, woman versus nature.

It’s an inherently silly conceit, sure, but it also functions as a jumping-off point for a tight thriller that does not shy away from gore or the establishment of narrative spaces solely for the purpose of wringing tension from them. To some, that’s enough. Crawl’s simple premise gives the director ample opportunities to break the proverbial levee early and then just keep fluctuating a stream of mounting tension and violent release.

Within this structure, there are genuine moments of emotional affect, however, with Scodelario and Pepper delivering committed and physical performances. Little moments are what make these emotions sing, like the marked heights on a door frame signaling Haley’s childhood growth or the camera lingering on a swing set to subtly suggest past years and simpler times. These moments function emotionally, as they establish historicity, and they also return for the purposes of tension and visual information; a bumped swing set signaling a slithering tail under the surface, a water level rising to match Haley’s notch on the door frame. While it is not strikingly original, it is refreshingly concise at under 90 minutes and, like much of the film’s narrative components, this circularity to Aja’s visual language makes Crawl neatly contained and satisfying.

This stretches to the way Haley and Dave talk, skirting generic ‘survivors in a dire situation’ exchanges and instead coming from a place of family. They bicker, argue, talk about the past. Why mom left, how your sister’s doing, why you should keep practicing and one loss ain’t shit, Haley. There’s something alarmingly honest (and funny) about the notion that family history and bullshit isn’t shed when a gigantic alligator catches you and your pops in the basement of a rapidly flooding crawl space in a hurricane. Family is family, and because of this bickering bond, there is a certain authenticity to the father-daughter relationship that lets these emotional beats gracefully weave between the carnage.

Because, really, Crawl is about the gators. It’s about flailing, thrashing bodies and crunched bones clamped between vicious, iron teeth. Aja—not unlike his peer Fede Álvarez (Don’t Breathe)—is honing in here on movement and geography; establish spatial coherency, give a simplistic mini-narrative objective, build tension, and then let it all rip. Like Don’t Breathe, Crawl often works best when the motion of bodies within a set and established space—go from A to B, don’t touch X—is perhaps all that matters. Take this batshit crazy sequence in or out of context, it’ll still make your blood pump.

These sequences are bolstered by a tactile nature that, not unlike those minor narrative details, give it extra bite. The texture of water and the ripples of bodies moving within it; how it feels to splash on your face. The way a kicked trap vibrates underwater. Dirt or excrement caught between your toes, mud caked to your shirt. Later, bubbles are used at the apex of tension, and wires snag a character’s scrambling body like a spider’s web made from the underbelly of our domesticity.

This giddy sort of play and craftsmanship may make some to wish for more “story.” However, when the story is considered within these moments, there is still gleeful summer B-movie conceits to be had. Like this pitch: who can swim faster, an alligator or the member of a swim team? Or more simply, do you haul ass out of an alligator-infested house that is home to sad memories when your dad is incapacitated in a flooding crawl space? One of Crawl’s greatest joys, however, is how it doesn’t overstay its welcome. Instead, it merely delivers the goods and then cuts to black. No cheeky bullshit, no wink-wink, nudge-nudge, ain’t life so damn cruel all the time? This sincerity is refreshing, like dunking your head in the pool at the height of a blazing summer day. Just check the water first.

Crawl is now in wide release.