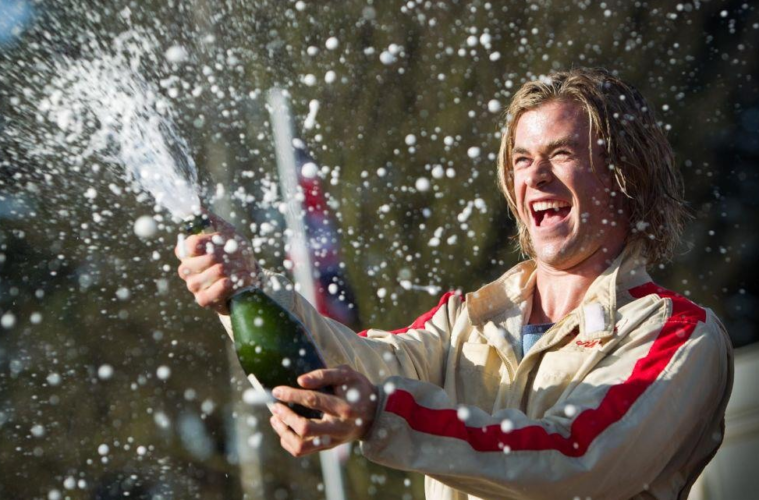 As Chris Hemsworth celebrates his 29th birthday today (I expect something similar to the above still), we’ve got the first official images from his Formula One racing drama Rush. News of a promising awards-worthy release date recently hit and now a reader has sent over the first stills, along with some from the official site. Directed by Oscar-winner Ron Howard, the images show off Hemsworth as James Hunt in just about every step of a race.

We’ve got the deep stare-down with Inglourious Basterds‘s Daniel Brühl as his rival Formula 1 racer Niki Lauda, the crossing of the finish line and then the actual champagne and lady-filled celebration. As per usual with Howard, the ’70s aesthetic production design seems to be spot-on and I even like some of the wear and tear shown in the helmets. Check them out below, mostly featuring our Snow White and the Huntsmen and The Avengers star, but the ensemble also includes Olivia Wilde and Christian McKay. Set against the 1970′s golden age of Formula 1 racing, “Rush” portrays the fast-paced and exhilarating true story of two of the greatest rivalries the sport has ever witnessed – that of James Hunt (Chris Hemsworth) and Niki Lauda (Daniel Brühl) and their illustrious Formula 1 racing teams, McLaren and Ferrari. A privileged, charismatic and handsome English playboy, Hunt could not be more different from his reserved and methodical opponent, Austrian born Lauda. “Rush” follows their personal lives both on and off the track and charts their rivalry from its inception in Formula 3. Here they competed viciously against each other until Lauda’s business acumen and surgeon like precision behind the wheel propelled him all the way to Formula 1; eventually landing him the number one spot at Ferrari. However it was not long before rambunctious golden boy Hunt fought his way into Formula 1, and into the hearts of a nation, dramatically seizing the championship from Lauda and proving to the critics, and more importantly himself, that there was real substance beneath the stylish exterior.