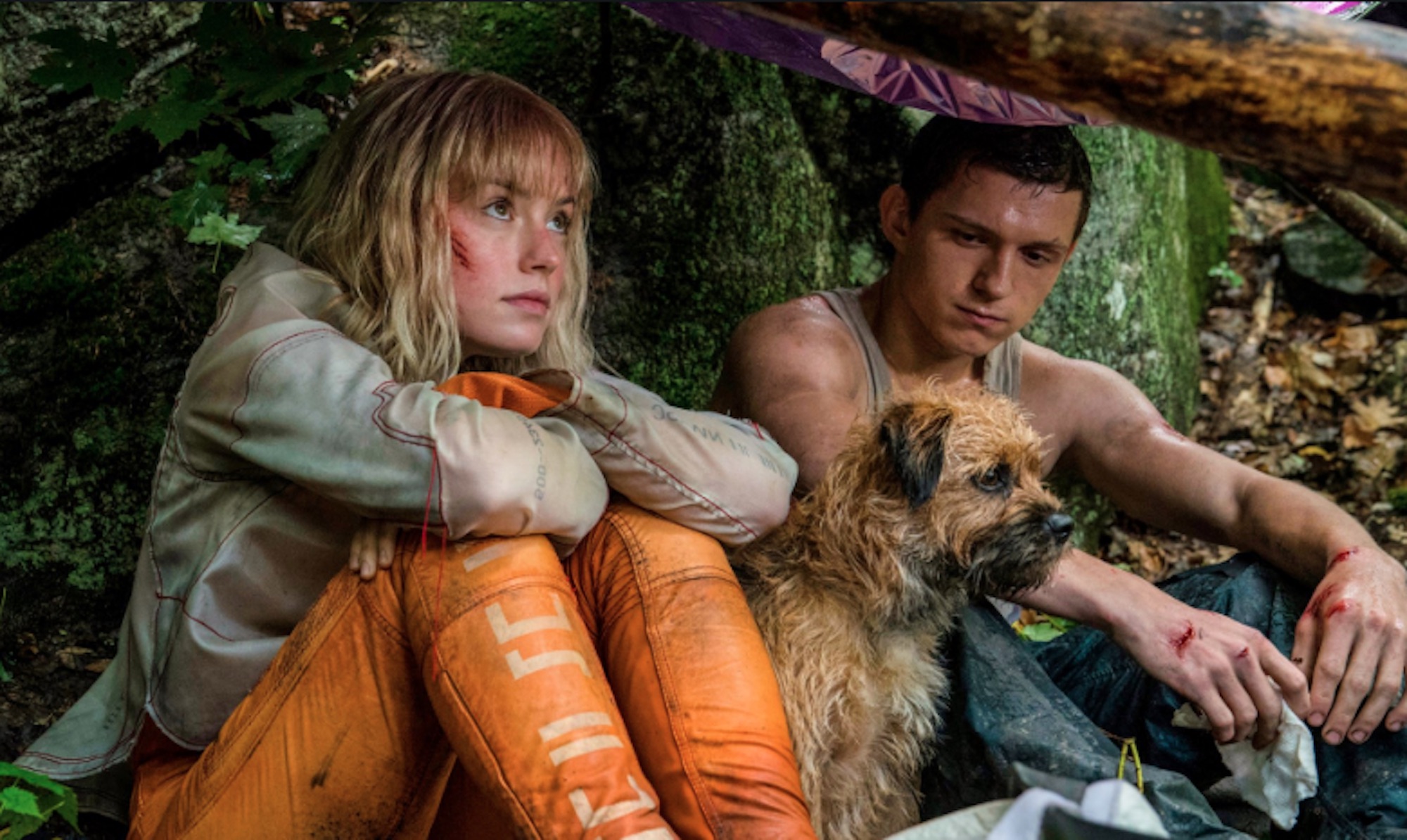 Doug Liman’s foray into science fiction has given us inexplicable lows like Jumper, and impressive heights such as Edge of Tomorrow. Chaos Walking finds an intriguing middle ground. A concept ripe for imaginative exploration, a stacked cast, and incredible set pieces don’t quite compensate for a lack of depth that would otherwise make the experience wholly satisfying.

Chaos begins on an unknown planet inhabited by an all-male colony. Their thoughts are an unfiltered “Noise,” wherein anything you think can be heard––if not controlled. This gives way to The Mayor (Mads Mikkelsen), who is in charge of the colony and dressed like a vintage Eastwood character, setting up an intriguing mix of the old west and dystopian aesthetics. We also understand The Mayor is the best at controlling his Noise because we never hear what he thinks––unlike Todd Hewitt (Tom Holland), who has no control of his thoughts. Todd’s desperate to impress The Mayor and do something useful, such as find a girl for the colony.

A ship crash lands, Daisy Ridley’s Viola arrives. Pigeonholed into a similar role from her Star Wars introduction, Ridley still excels, crashing down into this mysterious planet with no real explanation of her purpose being there. She’s a young, fierce female warrior with an unknown past who has to take up with our eager but suspicious hero Todd, who starts as the opposition (not dissimilar to Star Wars‘ Finn). The two quickly take arms, going on the run from the all-male colony as Viola tries to communicate with the ship that sent her. Liman’s action direction shines when he puts us in the throes of a high-speed chase, notably a wild shootout that proceeds as Todd takes Viola via horseback and the other colonists chase the pair through the forest down a hill.

Chaos Walking‘s greats success lies in its action and Noise. Done away with is the nonsense expository dialogue you may expect to find, thoroughly explaining in excruciating detail why they have Noise. There’s no pseudoscience, either. The viewer is thrust into this world where thoughts are visible and heard. A beautiful cerulean blue and green visual effect surrounds the heads of the characters while also becoming the focus of some action. The Noise can be useful or, if one isn’t up to controlling their thoughts, backfire. It’s a fascinating way to visualize doubt, fear, love, and desire, giving genuine insight into the characters without the Noise becoming overbearing for the audience.

The anxiety surrounding Todd and his Noise is the most engaging aspect of the film, and it’s perhaps what Charlie Kaufman found compelling when he scripted the first draft far back in the early 2010s. (The final screenplay is now credited to Patrick Ness, based on his book The Knife of Never Letting Go, and Christopher Ford.) Todd’s insecurities and doubt create an anxious tension when danger arises; he has the will to continue to mumble his name, as if an affirmation of his existence will ground him when he has to withhold information. He’s constantly in doubt that he’ll complete the mission to save Viola as well, but because of Holland’s earnestness, it’s easy to root for him to overcome the self-doubt plaguing his thoughts.

Chaos‘ downfall is incompetently teasing the mystery surrounding ego and Noise, skirting away from complex ideas about consciousness and the mind. The afterlife becomes a poorly explored focal point when Ben (Demián Bichir), father figure to Todd, watches a loved one pass away, and their thoughts and energy linger with useful information. It’s a beautifully striking image, but Liman doesn’t seem at all concerned with the nature of life after death. Communication with the dead therefore becomes a mere gimmick, a tool for Todd to attain later without careful consideration of its implications. Throughout the script, the parameters of the dead strike no deeper than the shallow ends the film wades in.

Liman essentially renders Noise as Jedi mind tricks. Those who learn to control their thoughts can turn them into animals, people, force fields, even telekinesis. It becomes about the balance of good and evil, the latter manifesting with the most intriguing character of the all-male colony, The Preacher (a dastardly David Oyelowo). He believes Noise is only for those with a pure soul, and that those who can’t use it must be killed. But Oyelowo’s character is underdeveloped as the chase continues, even though Chaos‘ best set piece takes place when he tracks Viola and Todd through a violent waterfall, plunging us through the dangerous aquatic terrain. While Oyelowo makes an impression, the complexity of his villainy as a terrifyingly devout evangelical man is painted with only the faintest of strokes. He carries a giant machete and threatens to kill without mercy in the name of a higher truth, yet his arc ultimately falls flat.

While Chaos Walking has its faults, it is very much of ilk with YA novel adaptations such as The Maze Runner and Divergent, while perhaps lacking the immersive depth of The Hunger Games, or at least the first couple entries of that series. Thankfully, its two charismatic leads share just enough chemistry to add the requisite stakes for a decently thrilling ride.