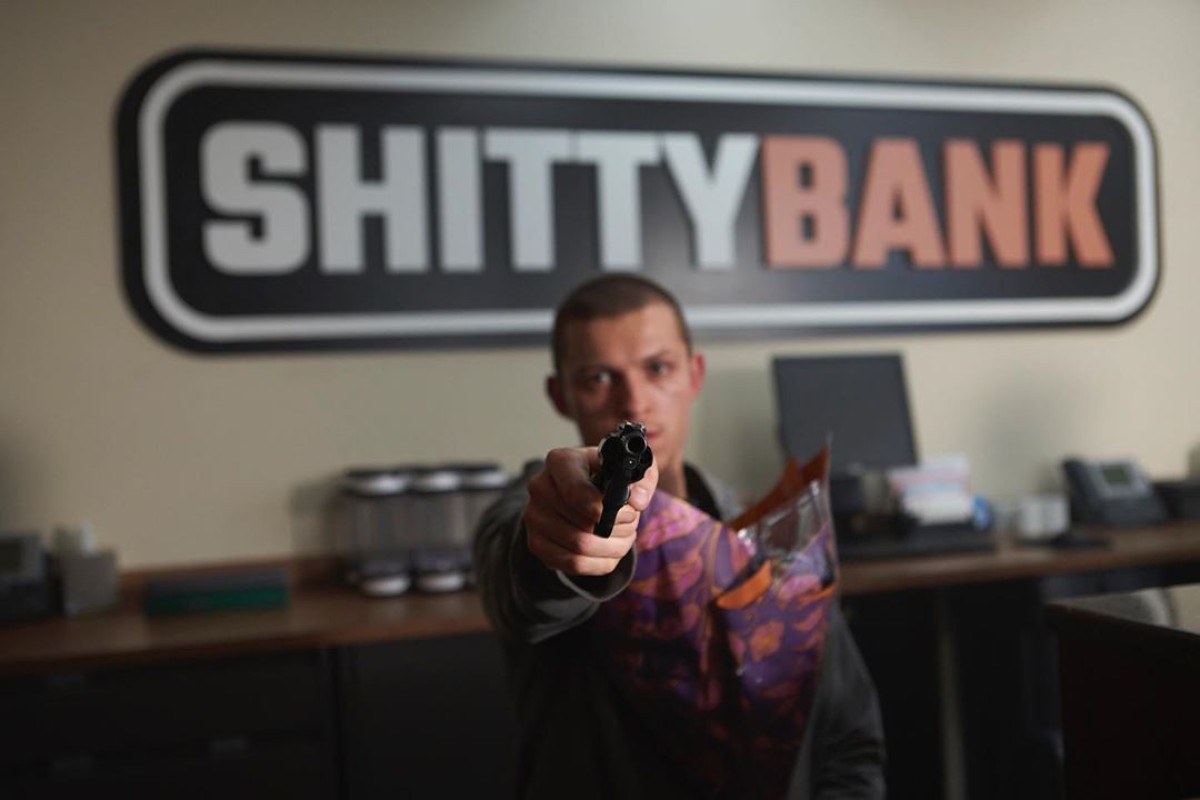 Making their first non-Marvel feature since 2006’s You, Me and Dupree, the Russo brothers’ Cherry, adapted from Nico Walker’s 2018 roman à clef and starring Tom Holland, is a frenzied, ultimately overstuffed film that tackles—among a dozen other thematic interests—toxic masculinity, the opioid crisis, the Iraq War, PTSD, and the prison-industrial complex. Highly structured and visually overwhelming, Cherry also attempts to synthesize competing genres—progressing through romance, war film, crime story, and ultimately addiction narrative—with uncontrollable velocity. Redeemed, in part, by Holland putting in the defining performance of his young career and nuanced support from Ciara Bravo as his girlfriend Emily, Cherry never pauses long enough to develop its competing preoccupations.

Split into five visually distinct chapters, as well as a prologue and epilogue, Cherry roughly careens through the protagonist’s life as he moves from college student to army medic to heroin addict before ending up, as the prologue implies, a bank robber. Written by Angela Russo-Otstot and Jessica Goldberg, the script follows Cherry’s life from 2002 to 2021 and covers significant leaps in time through heavy deployments of voiceover. Anchoring these disparate sections is the relationship between Cherry and Emily, a girl he meets in a college class before they end up dating. Learning that Emily plans to study in Canada, Cherry haphazardly signs up for a stint in the Army, working as a medic as he and Emily reconcile and eventually marry.

The longest section––and perhaps that closest to an overarching thematic interest for Anthony and Joseph Russo––tracks Cherry’s lingering PTSD upon returning from Iraq, advancing from prescribed painkillers to heroin as Emily joins him on a drug-induced descent. As tolerance builds and cash depletes, Cherry turns to bank-robbing to fund their addiction. Cherry lacks a considered plan: he often enters banks, sunglasses his only disguise, before demanding money from tellers. Cherry’s addiction grows, his robberies gain notoriety, and we all know how this will end.

The Russos and DP Newton Thomas Sigel use the systematic framework to, essentially, make seven short films, visually differentiating each. As Cherry labors away during basic training, Sigel compresses the frame, shooting in 4:3 before opening the screen back up as Cherry arrives in Iraq. Yet too often do the Russos fall back on these directorial affectations, jettisoning nuance for sweepingly cinematic shots, fourth-wall-breaking narration, and a host of other tricks that have no bearing on the actual narrative. Cherry is a consistently stylish sizzle reel for directors who have already made some of the biggest movies ever.

And for such an expansive timeframe, Cherry and Emily are the only characters actually developed; Jack Reynor and Damon Wayans Jr. show up for what amounts to brief cameos before being swallowed by the film’s insistence on constant forward momentum. As its poster attests, this is Holland’s film; his descent into addiction rings authentic, his mannerisms become more frantic as he desperately chases a high. Bravo plays foil to Holland, oscillating between quiet affection for Cherry and anguish as she similarly becomes dependent. Cherry succeeds as an actor’s showcase, even if one wishes the Russos would sit their camera still for a moment, to allow Holland and Bravo’s work to shine even more.

Cherry has no shortage of big themes throughout. In tackling so much at such a breakneck speed, the film buries whatever thesis compelled the Russos to make this film in the first place. When it eventually gets to Cherry’s addictive spiral, seemingly at the core of their interests, we are already halfway through a bloated 140-minute runtime. While the film draws a concrete connection between wartime trauma and eventual opioid addiction, Cherry never pauses long enough to investigate the reasons why Cherry becomes an addict, tossing away his and Emily’s slide into dependency with voiceover narration as the film jumps past their transition from oxycontin to heroin.

When Cherry does slow down, it often lingers in the salacious aspects of his life, foregrounding visceral wartime experience (rendered in graphic detail) or pauses to present his repeated bank robberies. Cherry is less interested in the repeated cycles of addiction, finally presenting his rehabilitation and recovery through an extended epilogue that reduces fourteen years of life to a single montage. It often prioritizes the violence rendered from and to Cherry instead of any meaningful dive into opioid dependency.

Yet the Russos are obviously ambitious in their treatment, cramming what amounts to half-a-dozen features into this nearly 2.5-hour film. Overt stylization does not stifle a compassionate performance by Holland and breakthrough from Bravo, but Cherry is seemingly at war with itself, never able to synthesize form and content in a meaningful way.

Cherry opens in theaters on Feb. 26th and on Apple TV+ on March 12th.