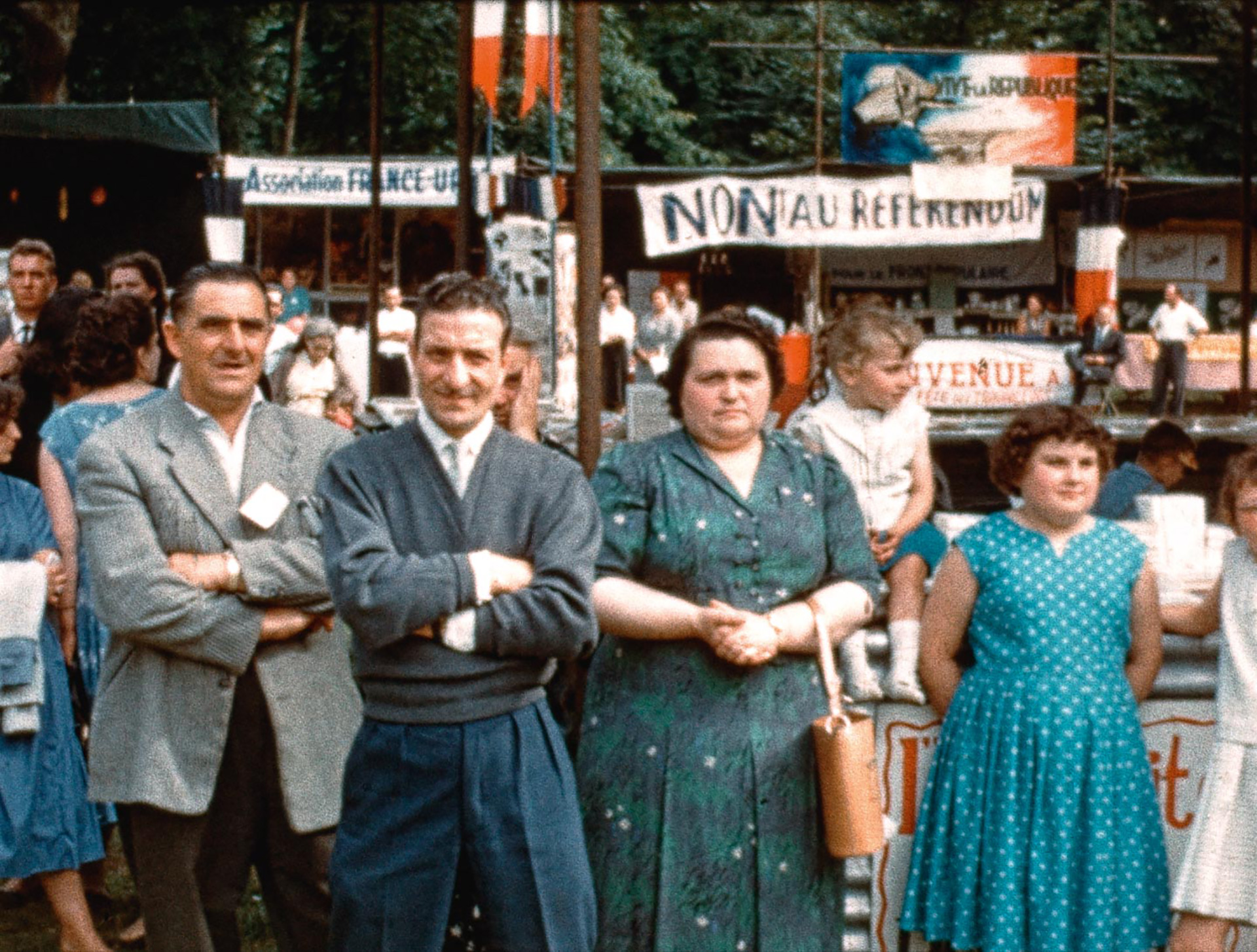 The MIT Press describes Didier Eribon’s book Returning to Reims as “a memoir and meditation on individual and class identity, and the forces that keep us locked in political closets.” The author never went back home upon leaving until after his father was moved to a nursing home for those afflicted by Alzheimer’s; and it was only upon his return that he began to recognize the underlying factors that made its community what it became, despite its origins. By looking inward at his own identity as a gay progressive always at odds with a homophobic dad who gradually allied himself with the National Front, Eribon began to uncover the historical events that altered the political landscape enough for a working-class town to embrace the far-right.

Director Jean-Gabriel Périot brings those words to life via an archival-based, visual collage entitled Retour A Reims [Fragments]. With Adèle Haenel narrating excerpts from Eribon’s book and imagery spanning fiction, documentary, and journalism, he leads us through the struggle most French citizens endured under the thumb of an insulated and power-hungry aristocracy from the 1950s through today. We learn about the author’s grandparents, the rigged educational system that failed his parents, and the ways in which politicians molded voters to their whims, despite the fact everything those candidates stood for was in blatant opposition to everything those voters needed to survive. Class warfare is replaced by racial divide until poor white workers become so turned around that they champion their own oppression under the guise of nationalist pride.

It’s impossible not to watch this devolution and think about the similarities to what’s happened with the United States’ own so-called “forgotten Americans” and the Tea Party spinning the ire formed by that white, working-class disenfranchisement away from themselves (millionaire Republicans profiting off their backs) and onto the “other” (immigrants) “taking” their jobs. As Eribon’s words (and those of the French citizens airing their frustrations decades ago) relate, it only took the whiff of power by the Communist party to throw its followers to the wolves and reap the benefits. With some carefully placed vitriol by the right telling those workers that the party cared more about the immigrant plight than theirs, a new common enemy was forged to maintain the status quo of a cannibalistic political cycle.

Elections became the goal. Not reform. And who’s surprised after watching Périot’s damning dissection of the French education system after World War II and its psychological violence towards an underprivileged class that had no choice but to quit early and start working while those whose parents employed their cheap labor continued into high school to learn how to maintain that same lopsided (and ultimately unearned) power? Eribon’s parents were “unskilled” laborers working long hours to keep the family afloat, constantly moving to better their environment until a new influx of migrant workers arrived to give them their own population to lord over as “superior.” To see their trajectory laid out so succinctly is to wonder how the working-class could ever let itself be so profoundly duped.

As one voice around the halfway mark states, “Farmers will farm, workers will work, and the bourgeois will bourgeois.” When the infrastructure is built by a ruling class cementing the type of advantages that would make anyone rising from below embrace their gifts and abandon any ideas towards equality they may have once had, inequality is no longer a flaw. It’s an intentional function. And to see how racism is wielded as the most potent weapon of all is depressing because it proves just how opportunistic and selfish mankind is in the face of bettering their fate. Because how does the working class get a Communist elected in France? By banding together with immigrants who share their desperation. To turn on them again so quickly afterwards is pathological.

And yet it’s also unsurprising. Like Eribon, I’ve watched my own family slowly forget where it comes from and embrace “American” nationalist rhetoric under the false notion that they are white, thus afforded the advantages that come with such indoctrination. (The fact that citizens of Arab descent are still actually considered “white” by the government via census data and beyond post-9/11 is wild because that distinction surely never gave racists pause when confronting our brown faces in the streets.) The world has grown more divided than ever in the decades after World War II despite everything that fight should have taught and those in power—the career politicians mostly born from aristocratic lineages with the money to afford Ivy League educations—exploit it for their own profit.

Hearing it unfold in such intimate fashion (despite Haenel’s narration confusing the fact they’re Eribon’s words) only solidifies its truths because it’s not merely coming from the world of academia. He is exposing what occurred with lived-in experiences, Périot returning the favor with those of others who went through the same things before speaking about them on-camera themselves. The parallels are often so uncanny that I wondered if we were perhaps watching Eribon’s parents and not two strangers who simply had the misfortune of enduring their exact hardships. But it makes sense if even I could find myself looking into a mirror at multiple points throughout this very French-centered narrative. Just because racism and classism have become quite prolific there, France is hardly their creator.

Returning to Reims screened at the Cannes Film Festival.