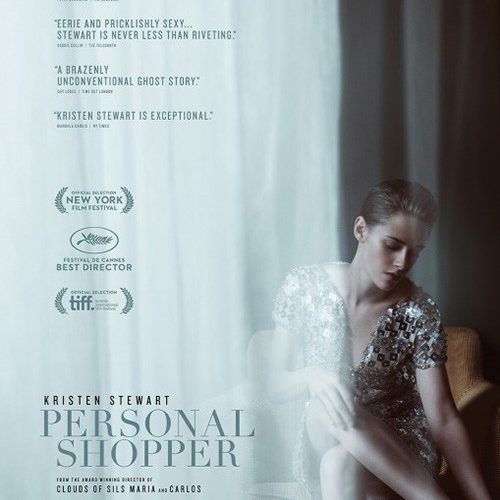 After Clouds of Sils Maria, Personal Shopper confirms Olivier Assayas as the director most adept at drawing the best out of Kristen Stewart. Here she follows in the footsteps of Maggie Cheung and Asia Argento, actors whose exceptional central performances prevented fundamentally flawed films by Assayas – Clean and Boarding Gate, respectively – from foundering altogether. Stewart’s achievement is arguably even more remarkable considering that for the bulk of Personal Shopper’s running time, her only co-actor is an iPhone.

En route to London from Paris to buy clothes for her employer Kyra (Nora von Waldstätten), a high-profile celebrity too busy to do her own shopping, Stewart’s character Maureen starts receiving text messages from an unknown number. As transpired earlier in the film, Maureen is still grieving over the death of her twin brother Lewis three months prior and has since been trying to make contact with his spirit – while he was still alive, as both suffered from a potentially fatal heart condition, the siblings had made a pact that whoever died first would reach out to the other from the afterlife. When the mysterious texts start arriving, she wants to believe that it is Lewis writing her, but her interlocutor prefers playing games rather than reveal his – or her, or its – identity.

Ever the genre-bender, Assayas has appropriated the ghost story as a means of exploring the subjective process of grief and the many obstacles and self-delusions that accompany its course. As should be expected, he also infuses Maureen’s trajectory with the immediacy and estrangement that have characterized the majority of his films over the last two decades, creating a ghost story for the globalized present. A lighting trip across Europe for the sole purpose of buying a dress is a habitual affair for Maureen, who lives her life constantly on the move, glued to her iPhone, seemingly without any semblance of a social circle and only communicating with her boyfriend, who’s on assignment in Oman, through very sporadic and distracted Skype calls. When her doctor asks her to come back for a check-up of her heart in six months, she replies, “I have no idea where I’ll be in six months.”

Along with the vapidity of her job, this is a source of existential dissatisfaction (even if not consciously realized) and another reason why the loss of her brother has been so hard on her. Assayas plays with the symbolic idea of twins as complements – two halves of a whole. He’d been the wholesome half, a carpenter content with living a sedentary life. With him gone, she no longer has him as an anchor. The text messages taunt her about it indirectly, prodding her about her wish to be someone else and daring her to try on the clothes that she buys for Kyra, something that the actress has specifically forbidden.

Stewart wears Maureen’s struggle on her face. Always unsmiling and with a pale, gaunt expression and huge rings under eyes, looking like she hasn’t slept in weeks, she seems to be carrying the weight of the world on her shoulders. At first, the text messages unsettle her, but as she pushes herself further into unknown territory, sneaking into Kyra’s wardrobe and assuming a new persona through her clothes, she finds herself invigorated, transformed. It doesn’t take long until she’s violently made to realize the misguidedness of her actions. She soon finds herself embroiled in a murder case that will expedite her grieving process, pushing her closer towards establishing an independent and fulfilled identity.

As per Assayas’ custom, the film is chock-full of fascinating themes and ideas and his indisputable flair as a director makes it compulsively watchable. Alone pulling off an extended and engaging pas de deux between an actor and a cellphone, which essentially boils down to close-ups of text messages and reaction shots, is a formidable feat. However, his treatment of the ghost dimension simply doesn’t work. Although on a thematic level, Personal Shopper never confirms the existence of ghosts, on a visual level it does: there are some truly second-rate CGI sequences, Maureen finds literal marks scratched on tables and walls, objects float through the air, in one scene an elevator and sliding doors operate on their own, and in another – this one caused a ripple of laughter through the auditorium – Maureen is captured in shallow focus while the blurry figure of her brother Lewis glides across the background.

These are almost certainly meant to represent her interior state of mind rather than actual physical manifestations of the supernatural, but showing them feels a little too easy, like having your cake and eating it too. More critically: they’re incredibly cheesy, eroding the film’s potential for a serious and incisive psychological exploration, which was there for the taking.

Personal Shopper premiered at the Cannes Film Festival and opens on March 10. See our coverage below.