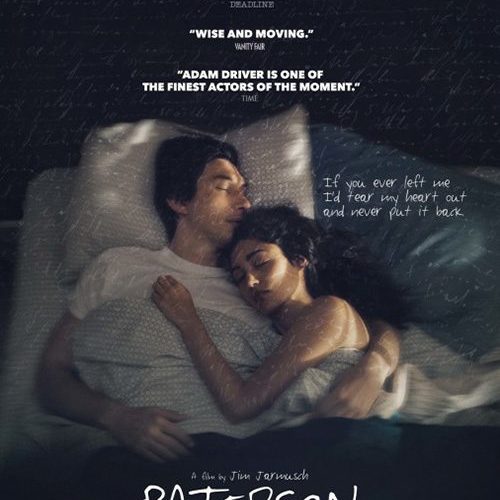 In his Village Voice review of Jim Jarmusch’s criminally under-appreciated The Limits of Control, J. Hoberman described the director as “a full-blown talent [who] erupts once a decade: Stranger than Paradise in the ’80s, Dead Man in the ’90s and The Limits of Control [in the ’00s].” Jarmusch has now validated Hoberman’s estimation with a fresh new masterpiece for our present decade: Paterson.

If there is one element working against the sheer wonder of Jarmusch’s film, it’s our own expectations. The narrative is an exercise in repetition, split up into seven days, the first five near-identical. Each one starts with a captioned – Monday, Tuesday… – top-down shot of Paterson (Adam Driver) and his girlfriend Laura (Golshifteh Farahani) asleep in bed together, followed by a relatively strict routine of events: Paterson gets up a little after 6 a.m. and goes to work as a bus driver, drives around until knock-off time, then returns home for dinner with Laura, takes their dog out for a walk, and ends the day at his regular bar, staring wistfully into his beer. Lather, rinse, and repeat.

Though infallibly amicable with all those he meets, Paterson is not a big talker and there’s always the sentiment that something is bubbling just beneath his placid surface – Travis Bickle trading in his Manhattan taxi for a New Jersey bus, if you will. Considering he lives his life on an uneventful loop, convention dictates that he’ll eventually break it through some sort of catharsis, more likely than not a violent one. Nothing could be further from the truth, and the sooner this is realized, the sooner will the film’s immense, exceedingly subtle pleasures come to the fore.

What is bubbling within Paterson is not existential anguish, but inspiration. Throughout his day, we see him scribbling poems into his notebook, which are transcribed onto the screen and recited in voiceover. Though the same device has been used to treacly results in lesser films — for example, in Bernardo Bertolucci’s Stealing Beauty — it has a positively transporting effect here. The lovely poems, actually by the real-life poet Ron Padgett, express Paterson’s love for his girlfriend by describing the vintage blue-tip matches they have in their kitchen, or consider growing older as a gradual discovery of new dimensions: starting with height, length, and width – “like a shoebox” – then time, and onwards into increasing abstraction.

The poems are accompanied by quietly lyrical passages depicting Paterson driving or walking through the the town of Paterson, New Jersey, which the enchanting, unshowy cinematography by Frederick Elmes renders as an autumnal small-town idyll, while the dreamy, distorted strains of Jarmusch’s band SQÜRL fill the soundtrack. Within Paterson’s cyclical structure are embedded myriad smaller recurrences of varying correspondence: the black-and-white geometric patterns that Laura paints all over their house; several pairs of twins; overheard conversations amongst Paterson’s passengers; encounters with other creatives (a cameo by Method Man rapping in a laundromat is particularly memorable); the fact that his name is Paterson, the town is called Paterson, the bus he drives is the 23 Paterson, and the epic poem written by his idol, the Paterson native William Carlos Williams, is titled “Paterson”; and countless more. The narrative’s seven days thus turn into stanzas, and these recurrences constitute the manifold rhymes to Jarmusch’s exquisite cinematic poem.

Although Paterson is still marked by Jarmusch’s hip proclivities and nostalgia, its restrained aesthetic and Driver’s sublime, understated performance render it the director’s most recognizably human and poignant film. It’s probably not a coincidence that it’s also his most distinctly autobiographical. Not only did Jarmusch aspire to become a poet before turning to filmmaking, but he also peppers Paterson with allusions to his previous work. Examples include the shot of Paterson and Laura in bed that starts each day, reminiscent of a similar recurring image in Only Lovers Left Alive, or the vintage matchbox that inspires Paterson’s love poem, which harkens back to those containing the hitman’s assignments in The Limits of Control.

The most evident self-reference is a cameo late in the film by Masatoshi Nagase, the actor who played the rockabilly tourist in Mystery Train. In that film, his character flew across the world to visit Memphis, the home of his musical idols. Here, he’s a poet reincarnation of that persona, this time visiting Paterson, the home of his hero William Carlos Williams. In the film’s best scene, with only a few words and a perfect gift, he reignites Paterson’s passion for poetry following the destruction of his collected poems, which he had never copied or digitalized (again, the romantic aversion to technology). Immediately, Paterson picks up his pen again and starts scribbling away, closing the film with his most beautiful and stirring poem yet.

Like the best poetry, Paterson keeps its meticulous construction hidden, letting its impact sneak up on you unawares. When the final image cuts to black, it triggers an overwhelming surge of emotions that’ll make you want to remain seated in the dark until long after the credits have finished rolling, basking in this marvelous film’s afterglow.

Paterson premiered at the Cannes Film Festival and will be released by Amazon Studios on December 28. See our festival coverage below.