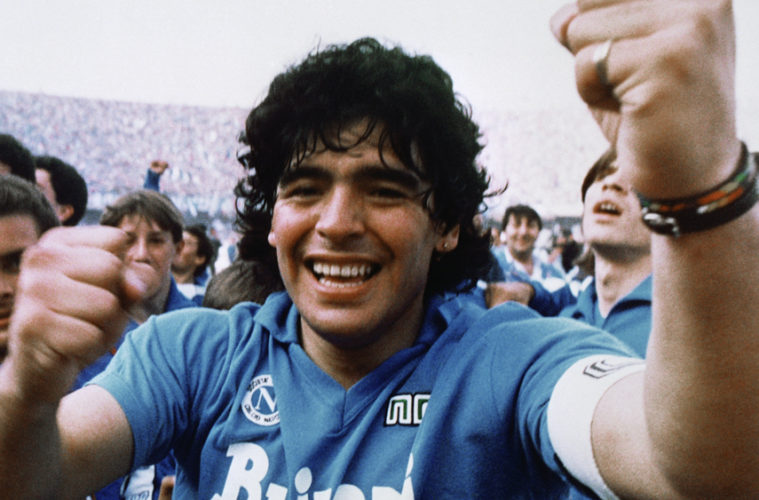 Cannes Review: ‘Diego Maradona’ is Another Compelling Study of Fame and Genius from Asif Kapadia

Professional football (or soccer, if it pleases) has never really lent its wonders to the big screen. Lacking the glitz of North America’s more popular team sports or even the staggering, gladiatorial heroism of something like boxing, when it comes to cinematic myth making the so-called beautiful game has always, for one reason or another, faltered. The new documentary Diego Maradona attempts and at times succeeds in addressing that situation by zooming in on the tumultuous years that the Argentinian footballer Diego Maradona–still believed by many to be the greatest ever to play the game–spent at Napoli, an Italian football club based in the city of Naples.

It is certainly a story worthy of the treatment. During his eight-year spell there Maradona would carry the team to unprecedented success by twice winning the league–something they had never before done in their history nor have they done it since. He also won the World Cup with Argentina in that time–some say singlehandedly; famously developed a taste for cocaine; and fell in with the Camorra, the most infamous crime syndicate in the country.

The director is Asif Kapadia, a filmmaker whose two previous documentaries focused on tragically short lives: first the Formula 1 driver Aryton Senna (who died in a racing accident at 34) and then the singer Amy Winehouse (an overdose at 27). Maradona, by forces unknown to this world, is still with us so Kapadia’s decision to zoom-in not only makes narrative sense, it also works a charm. Indeed, the director bypasses whole decades of table settings during the opening credits alone, taking us from Maradona’s childhood to his early promise with local club Boca Juniors and then, in 1982, to his unsuccessful transfer to Barcelona. The philosophical–some would say arrogant–ethos of the Spanish club (their motto, Més que un club translates to “more than a club”) had required that Diego–aged just 21 at the time–be a good boy. The Neopolitans, Kapadia shows, found much to root for in the wildness.

Working exclusively with archival footage (as is the Kapadia signature), the film does well to articulate the player’s scarcely believable rise from gifted, unpolished newbie to something close to godlike status. This came using his abilities with a ball but, as we see in the footage, also with his handling of the crowd. His celebrity would burn so bright that it wasn’t long before Carmine Giuliano, then head of the Camorra family, came calling with Rolex watches and white powders. As did many women. Indeed, it was never gonna last.

Interviewees are heard only in voice-over, including Maradona himself who talks us through the drama and addiction but, regretfully, only seldom has things to say about the game itself. The best takeaway is his line that football is “a game of deceit” and Kapadia is right to play this not over cynical tackles and foul play but over a mesmerizing clip of Maradona dribbling with the ball, backed by stirring minimal piano keys. There are also some lovely pitch-level angles of his most famous on-field moments, including his two goals against England in the quarterfinals of the Mexico World Cup, perhaps the most famous brace in the history of the game.

The most resonant elements of Kapadia’s film, perhaps inevitably, are the details of his fall. These were politically influenced, of course, but there were other factors–including the player’s own bitterness and exhaustion, as well as how Italy turned against him en masse. The film also finds resonant things to say about race and class in sport, and the different way in which players of lower income backgrounds or darker skin tones are often treated by the press when wealth becomes a factor. Indeed, this is not just a sporting film but, like Amy or Senna, a film about the volatility of fame and genius and what those two things can do to humans. An interest in the game is probably as essential here as an interest in Formula 1 was for Senna. Which is to say: not a lot.