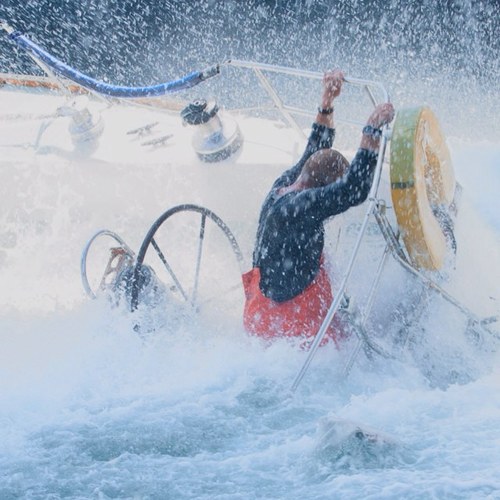 [Cannes Review] All Is Lost

The hurdles in making a film with a single actor, virtually no dialogue and, while you’re at it, also setting action in the middle of the ocean sounds like a daunting, if not impossible feat for a filmmaker to successfully accomplish. Yet, miraculously, All Is Lost, the second feature film from Margin Call director J.C. Candor, is an uncommonly effective piece that acts as a complete reversal from his previous feature. Starring the timeless Robert Redford as a nameless man — in what might be a pinnacle performance that he could happily retire after — the film rests entirely on his shoulders, and he carries it with grace and class. Moreover, the nuanced details in his performance anchor All Is Lost without exaggerating the direness of his own predicament.

We open with a voiceover from Redford’s nameless character — the only time we hear him speak in complete sentences — making a decree that he has given up on life, despite his best efforts. We then see the nameless man, alone, on a yacht voyage in the middle of the Indian ocean, awoken by water rushing into the inner compartment of his vessel. While he was asleep, a collision occurred with a large shipping crate that had accidentally fallen off a tanker, thus breaching the hull of his boat. He immediately loses a few key pieces of equipment (including his satellite navigation and radio) to the rushing water, raising stakes from the get-go. This leads Redford’s nameless sailor to use his experience, wits, and resourcefulness to attempt survival against the wild, unpredictable, raw power of nature.

Despite being able to patch up the hull, the nameless protagonist is quickly forced to jump ship, relegated to survive on a life raft using only analog tools (such as a sextant and nautical maps) in hopes of traveling into a shipping lane of the very freight crafts that dropped the cargo and placed him in this predicament. Some scenes feel reminiscent of Ang Lee‘s Life of Pi, being only stripped down to the pure human instinct of survival at all costs. As his attempts to be rescued seem to be in vain, the dangers mount from sharks circling his boat and the unrelenting sun bearing down on his resolve. It is not long before the nameless character must confront the dark reality that his life might be coming to an end.

A wildly impressive accomplishment on Chandor’s part is keeping the audience engaged without at all relying on the clichés associated with this type of film. There’s not much in the way of yelling or overdramatic breakdowns; it, instead, feels to be a genuine story of survival. A sublime beauty is to be found in its manner of shooting, too, with angles from the ocean floor giving an almost angelic quality to these ruthless seas; in some ways, the journey of this nameless character suggests a greater parallel to the journey of life, complete with (thankfully) subtle symbolism which suggests Chandor is getting at these deeper themes. Let’s not dispel an interesting irony about the nature of the freight ships: how their presence both caused the problem in the first place while, also, failing to save Redford when he needs them most.

With a performance that’s sure to be remembered for years to come, All Is Lost is a surprisingly mature and profound tale about overcoming the impossible, even if it means sacrificing everything.