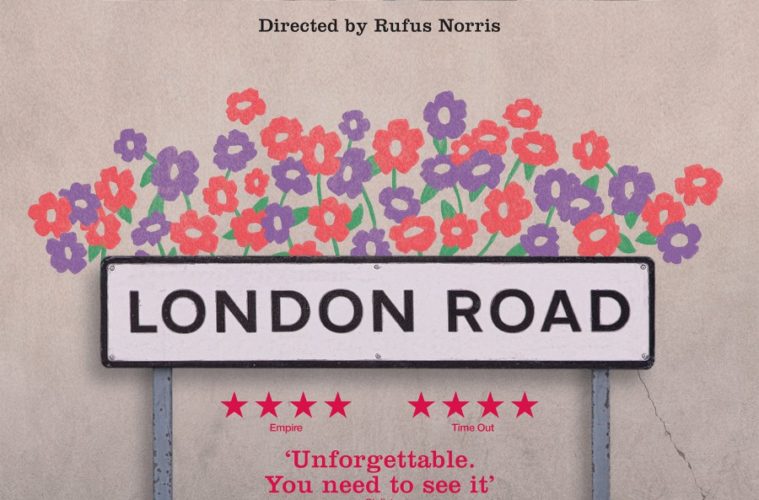 Ideally, big-screen takes on massively successful musicals will do two things. First, and most obviously, is capturing the pleasures of an original work, making clear why people flocked towards this material in the first place. Second, and more complexly, is making this medium count — using shots and cuts and cues to build something that might eventually supersede the source. If I can say much for London Road, then, it’s that fidelity to the original material is probably a given. More than being based on true events — the 2006 murders of five prostitutes in Suffolk; this particular account was based, verbatim, on interviews conducted with residents of London Road, a picturesque suburban community where many of the prostitutes frequented — it retains the main creatives: director Rufus Norris, writer Alecky Blythe, and composer Adam Cork have all assisted in the transition. If you seek an overview of the case and wish to access that trio’s spin on it without having to splurge for a theater ticket, you may have something here. Neophytes, however — and this includes yours truly — might find themselves needing to do some legwork if they want to know why the original production was showered with praise.

It’s not necessarily that the material doesn’t translate to film. Being introduced to it herein, I’m inclined to think there’s purpose to this work. So it seems, at least, when a few wonderful sequences — almost exclusively the musical bits, which strikes me as a sign that what was already coordinated can be cinematically harmonized with a good shooting and editing team — and specific conceits (e.g. the mockumentary interview approach that much of the film wraps around) reveal themselves as driving London Road’s conflict. What it lacks is rigidity. The strength of those scenes are in conflict with relatively simple dialogue exchanges surrounding them, while the sing-song intrusions into regular dialogue sometimes feels more like a gimmick than a form with unifying qualities.

It’s thus worth asking how much of the best material is specific to this cinematic incarnation. If most of London Road’s lasting pleasures are oral — remembering certain sing-song vocalizations that create both a pleasing harmony and, in the case of where they’re (intentionally) discordant, slyly comment on the movie’s sense of perspective / class privilege — then its visual design mostly pleases in retrospect as an admirable translation of the material. That’s not much, and it’s hardly reminiscent of the best play-to-film adaptations, which tend to milk every gesture and camera move — components that are either heightened via or entirely new because of cinema — for all they could mean. When I say this its aesthetics and rhythms are closer to a fine BBC production than, say, Roman Polanski, know that it’s about half complimentary.

Yet retaining the play’s more universal qualities (e.g. language) also means the central cast can work with material that’s known to serve its performers rather well. And so while the private lives of these people are primarily interesting in relation to the exterior drama, the players’ mere presences contribute enjoyment on a moment-to-moment basis. It just so happens that, aside from the recognizable Olivia Colman, they also look so much like regular people that London Road’s opening — in which central characters are introduced by way of the interviews — left me to assume it would employ those originally involved with this case. (The only exception is Tom Hardy, here making a cameo as a singing, only seemingly inconspicuous taxi driver. His presence is welcome, of course, but so galling in the established context of his supporting cast that I started to wonder if I’d dozed off and imagined most of it.)

As the movie gets bigger, more theatrical, and, indeed, more musical, it doesn’t concede that unique presence of the actors. When that’s used to turn toward a less-than-unfamiliar vision of the corrosion behind white picket fences, the parallel effect of London Road’s expansion is the realization that Blythe’s scripting is the most frustrating component. If you can believe the horrifying late-in-the-game reveal shared by Colman’s Julie, it’s probably because of Colman herself — but that’s not quite enough.

London Road may play better on a second viewing, once the lay of the land has been completed and some of its odder pieces could have room to more fully reveal themselves. How pleased I’d be if everything that works is not in vain. For now, however, I’m uncertain as to how much the project’s worth discussing after a certain point in time.

London Road played at the Camerimage International Film Festival and opens on September 9.