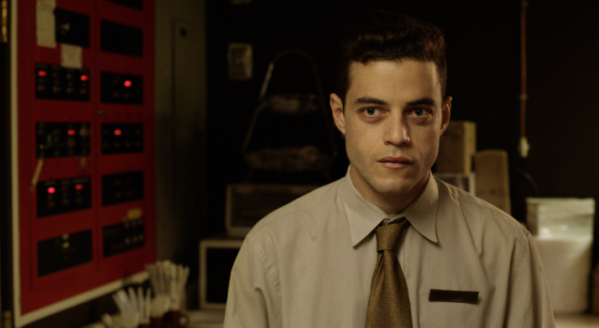 When it comes to head-scratchers, Buster’s Mal Heart is certainly one of them. So, when given the opportunity to speak to filmmakers about their craft and their project, we jumped at the chance. At Fantastic Fest we sat down with writer-director Sarah Adina Smith to talk about her second feature. While many answers to questions we had after the screening weren’t given, sometimes getting to know where someone is coming from gives a better understanding of why they put on screen what they did.

Buster’ Mal Heart stars Rami Malek (in an incredible performance) and the film has just as many humorous moments as unexpected ones as his character seeks to find a better life for his family. Smith’s feature covers a lot of ground — from physics of the universe, to our place in the world, to religion, to the search for happiness. Below, Smith explains the way she saw the world, and this is the result.

TheFilmStage: I really hate to ask a question like this, but as the film industry is still a male-dominated profession, how do you view opportunities or challenges as a female filmmaker? How quickly does that connect to success, or opposition in your eyes?

Sarah Adina Smith: I get asked that a lot, but I don’t really have a standard or really good response. It’s hard to know what it’s like being a woman in the film industry because I’ve never been anything but a woman. [Laughs] I don’t know any other way. But the one thing I can put my finger on is, and this is true for women in any industry as we’re seeing it in our Presidential race right now, I think that for thousands of years we’ve been conditioned to find that a woman’s voice is less appealing than a man’s.

I think that for that reason, both men and women audiences tend to give a male voice the benefit of the doubt more quickly. So, in any movie, you have five to ten minutes to earn an audiences’ trust. If you don’t do it there, then they will discount the rest of your movie. So I think that, sometimes, when it’s a man’s name at the beginning of a movie, we give him a benefit of the doubt.

It’s kind of the equivalent to the soft bigotry of low expectations. So that’s the thing that I have felt, yet it’s very difficult to quantify and articulate because you never want to make any excuses for yourself, or cry and whine. I’m much more interested in making movies that I love rather than complaining.

But if there’s anything I would love to point to, and want to change, it would be that I want women’s voices to be so common that we no longer need to ask this question, or refer to female filmmakers as “female” filmmakers. We can just say that “this is a filmmaker.” By the same token, I greatly appreciate the efforts being taken to shed light on the issue, and people who are working really hard to do that. I long for the day I can be interviewed as just a filmmaker.

Let’s talk about you and your style. In the Q&A, you said that you have a short attention span. Does your creative process lend itself to your personal way of seeing things? Or do you adapt to the narrative at hand?

I do have a short attention span, but it’s only for things that don’t interest me. [Laughs] The deeper I get into a film, the more interested I become, and then my attention space becomes quite infinite. But my short attention span works to my advantage because if something is not speaking to me, I move on. So it’s my metronome for how I make decisions. It can be a liability in real life, but it can be helpful in my creative life because that means I will make things I truly fall in love with, and I won’t just make things to make things.

Of all the elements, literal and ambiguous, spiritual and theoretical, I really grabbed on to what Jonah (Rami Malek) said about needing to gain “traction.” It felt like you were trying to say something more about the topic than just one husband/father’s quest to get out from whatever was holding him back.

Absolutely! I think so many of us, myself included, live paycheck to paycheck, and month to month. That makes it really hard to get traction so you aren’t just a slave to money. I think we are all seeking freedom, peace, and love in some way or another. On that note, Jonah’s struggle was spiritual, but it was also very practical as well. He was having trouble providing for his family. But he wants to give them the freedom that he knows is possible around the corner, yet he never seems to be able to turn that corner.

I find that I connected most with that and Jonah’s relationship with his daughter as I have a 16-month-old daughter.

Oh, wow. So you know it really well!

I’m always worried about my next step because I now have another pair of shoes following me around. So I want where I’m going, and what I’m doing, to be of benefit to my whole family. Jonah had many problems, but that one was relatable.

What I was trying to do with the film was show people how much pressure someone like Jonah was under. Later, we would find out what happened when he cracked. One of the things that this film examines is him in the here and now. We don’t get to know his back story too much, but I imagine that Jonah was a guy who had probably been to jail before, he was probably homeless before, he’s probably struggled with undiagnosed mental illness, and yet he fell in love and finally got his shit together for a second. He has this child he’s completely in love with, he has a family he wants to give everything to and he finally feels like he has some sense of stability. But he’s a slave to the system that’s giving him no reprieve. He’s working the night shift that is driving him back to the edge and that’s where we’re meeting him – back on that edge.

There’s a scene in the kitchen where he – talking about traction – just explodes, and I’m happy you got Rami for this. He’s just now getting a chance to shine and a film like this is going to help widen his awareness.

Let me ask you about certain scenes in the film. Some things were foreshadowed and I love how the visuals were both hints and call backs. For instance, when Jonah walks into the hotel room, he walks to the bathroom to find the tub filled, a single boat floating there, but also, the drain is visible in frame. So you have references to Jonah’s isolation, but also the inversion. I really thought the visuals were strong.

[Laughs] The drain is a reference to the a huge element of the film – that inversion. Once we hit the threshold, we’re all going to be sucked in. For Jonah, it’s a driving theme of the move. It’s a one-way passage or path. But as you know, it is not certain to end any better than the life that Jonah has now.

One of the strongest elements was the comedy; the humor is as unexpected as the drama. Where in the process did you decide that the film needs humor, or how much, and where did you find that line?

I guess I don’t think that way. I didn’t set out like, “Here’s my story, and now I think I should add humor to it!” I think I work more organically than that, so I started with character, and this character was tragically sad. One of the opening images I had of him, which was not something that made the cut of the movie, was this mountain man who was snow shoeing up the mountain, but he’s struggling and falling over and over again. In some ways, that was one of my touch stone images while writing Buster’s Mal Heart.

Well that’s another kind of traction right there.

Exactly, and there’s a certain sort of absurdism because existence is absurd, and we’re in a universe governed by mechanics over which we have no control – we don’t chose when we’re born, we don’t choose when we die and yet we’re placed here with consciousness and there’s something sort of graceless about life. Life can be completely graceful, and beautiful, and full of wonder. And you would think that the universe would give you grace in the moments of sadness or uncertainty. But it doesn’t happen. Sometimes it’s just banality; you trip, you fall, and that’s the absurdism I was going for in the movie.

The film can be viewed many different ways. So would you call the ending a “happy ending,” or Jonah waking from a bad dream? Or is it a dream? It seems like he has nothing to worry about at that point, but it is too perfect considering what we saw him go through.

I would call it as much happiness as we’re going to get. I would say that it is a beautiful reprieve in an otherwise merciless cycle of love and loss. I was hoping to give the audience a brief moment of peace, however fleeting though it may be. For me, that’s incredibly optimistic, hopeful and happy because if you can experience it once, you know it’s there, and you have the opportunity to find it again.

Where does this take you both as a filmmaker and a person? What worked, what didn’t and what would you do, and not do again?

I think everything worked, and I think I learned an incredible amount. I wouldn’t change anything about the experience or the film, and I feel that way about life, too. I try to live a life without regret, and it’s a careful balance of what comes, but also determination and will for what you hope to come.

I guess I feel that this is a tough question to answer because asking me about the film has me thinking about a response to things that are going on in my life. I am constantly learning, and evolving and I don’t regret any of it. Things work out the way they do because they have been determined to end up that way.