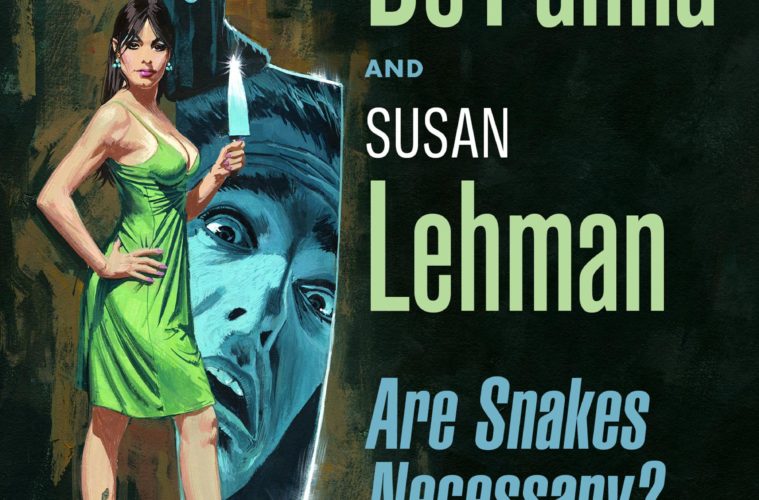 The very loud tempest / very small teapot of Domino (good movie) made easy to overlook the debut novel by Brian De Palma, who partnered with Susan Lehman on Are Snakes Necessary?, a political thriller published in France last year. De Palma a la Mod has been the primary source in English-speaking territories, e.g.:

“My partner Susan Lehman and I wrote a novel together, you know? A political thriller, according to an idea I had for a scenario. I am very good at designing the plot and dialogues, it’s the characters, and all the rest has been written together [with four hands]. It was sent to one of my agents at ICM who didn’t know what to do with it. I think it’s very commercial material. And as I am in France, I thought maybe I could edit it in your country. I sent the manuscript to a friend in Paris who recommended an editor in France, we’ll see. As you get older, you always have ideas, but it’s more difficult to be able to mount them when you reach an age like mine. So it’s easier to make novels. Kazan knew that too.

It’s pretty close to Blow Out. I combined several ideas that I had. The main character is a senator who comes to the elections. There is also his campaign director, a malicious character, and a photographer who finds himself hired to take pictures on a film that is the French version of Vertigo! After all, you know that Vertigo is inspired by a French novel by Boileau and Narcejac. There’s all this and I had a lot of fun. We did this last summer.”

Mon ami sans le langage de Français are having patience rewarded: Hard Case Crime will publish the novel on March 17, 2020, per EW. It sounds like De Palma through and through, following “a philandering senator who’s cheating on his Parkinson’s-afflicted wife with his campaign’s beautiful young videographer. When things go wrong, the senator calls in his fixer to set them right, with deadly consequences stretching from Washington to Paris.” We would, of course, gobble this up in a heartbeat no matter what, though it’s nice to know Snakes has a fan in Martin Scorsese, who says it contains “the same individual voice, the same dark humor and bitter satire, the same overwhelming emotional force” we’d hope from the man. As for the novel being “like having a new Brian De Palma picture,” I have to wonder: good God, what did Martin Scorsese make of Domino?