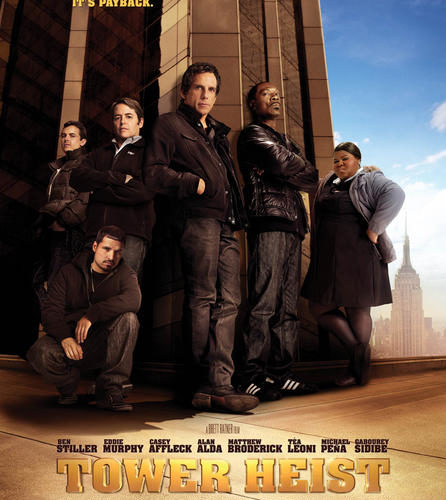 I was feeling pretty good about my life for the last few years. Brett Ratner hadn’t directed any feature films and Eddie Murphy had more or less fallen off the grid. That is all about to change with Tower Heist, as the hack director returns with Universal’s big studio comedy. The only thing that still gives me hope is Casey Affleck‘s involvement and Noah Baumbach being one of the EIGHT credited screenwriters, including Bill Collage, Adam Cooper, Leslie Dixon, Russell Gewirtz, Ted Griffin, Jeff Nathanson, and Rawson Marshall Thurber.

The large ensemble cast also includes Ben Stiller, Matthew Broderick, Téa Leoni, Gabourey Sidibe, Stephen Henderson, Judd Hirsch, Michael Pena, and Alan Alda. Nothing seems particularly funny or interesting in the trailer below, but let us know what you think in the comments. Check it out via Yahoo, along with the first poster. After the workers at a luxury condominium discover the penthouse billionaire has stolen their retirement, they plot the ultimate revenge.

Are you looking forward to Ratner’s return? Anyone?