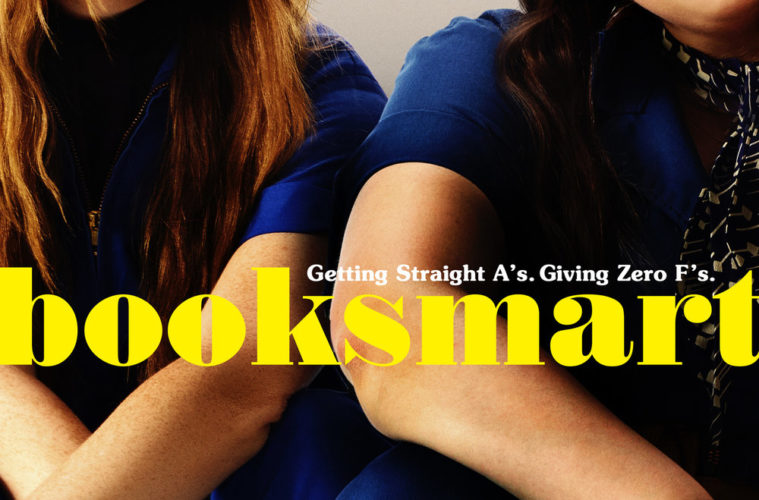 The universality of the reminiscence bump – the oft-researched theory that throughout one’s life, people have the most vivid memories from the ages of 16 to 25 – has meant there has been no period of time that has been more thoroughly dissected in cinema. Screenwriters have repeatedly drawn from that roller coaster of youthful emotions in hopes that both audiences young (those experiencing that time right now) and old (those nostalgically reflecting on the formative experiences, both good and bad) will connect with what is seen on screen. Despite a rocky, over-the-top start, Olivia Wilde’s directorial debut Booksmart eventually manages to succeed on both fronts, feeling like a pointedly progressive snapshot of today’s generation while also bringing an earned sentimentality when it comes to the highs and lows of high school friendship.

On the eve of graduation, booksmart Molly (Beanie Feldstein) and Amy (Kaitlyn Dever) are hit with a crippling realization: their isolated lives of studious dedication up to this point have all been for naught. In their Los Angeles high school, it’s revealed even the cool kids had strong time management, balancing hard partying with school and getting into the same top-notch colleges that Molly and Amy did. Taking the form of other one-day high school-adjacent films like American Graffiti, Can’t Hardly Wait, Ferris Bueller’s Day Off, Dazed and Confused, and, most notably, Superbad, we follow the best friends over the next 24 hours as they set out to catch up on the fun they missed out on, packing in all the madcap adventure and graduation-induced anxiety one can imagine.

As they track down the ultimate house party they weren’t explicitly invited to, their journey begins a bit too broadly episodic to provoke laughs that feel natural. We believe in their mission and their friendship, but not those around them. In contrast to the sharpness of Lady Bird or the pathos of The Edge of Seventeen, Wilde and the quartet of screenwriters–Susanna Fogel, Emily Halpern, Sarah Haskins, and Katie Silberman–initially aim for a more heightened, unrealistic tone as they reach for larger-than-life humor amongst the wide array of quirky supporting characters, a decision at odds with the film’s emotional center of Molly and Amy.

Outside of Molly and Amy, the film gives plenty of real estate to Jared (Skyler Gisondo), a lonely rich kid whose treats friendships like a toy to buy, and his peculiar companion Gigi (Billie Lourd), a mystical force who pops up in the most unexpected of places. Lourd is clearly having a blast and Gisondo’s character eventually engenders some empathy, but with both of their characters starting out at 11, they often feel like the butt of a half-completed joke. In deus ex machina teacher mode, Jessica Williams’ role is particularly unnecessary, especially when it comes to the completion of her subplot. There’s also the requisite, drug-fueled animated sequence, one of a few moments that prioritizes a forced, timely message rather than what feels like an authentic thought from our leads. Bringing up body image, identity, desire, and representation, Booksmart offers a fresh, female perspective often lacking in the genre, but the way these issues are presented can feel like screenwriting bullet points rather than fully explored ideas.

Thankfully by the second half, the film eventually re-centers on Molly and Amy’s friendship, which carries far more weight than the comedy. The perfectly-cast Fieldstein and Dever have a warm rapport from the jump and it’s clear Wilde lets them simply do their thing, as if her crew happened to stumble upon a friendship that existed since childhood. Regardless of the outlandish characters that inhabit their school and beyond, there’s a bona-fide camaraderie between the two, whether they are talking about their crushes or what stuffed animal they may have experimented with sexually. As the desires of their night become a reality in unexpected, not entirely welcome ways, the fissures that occur are rendered with an empathetic, affecting touch thanks to the foundation that was built.

Shot mostly in handheld close-ups as we track our leads, Wilde relies on a heavy dose of slow-motion and the soundtrack to carry more than a few scenes, but at least her taste is eclectic, including tracks from Ra Ra Riot, Anderson .Paak, LCD Soundsystem, Run the Jewels, and Perfume Genius. The lattermost is used effectively in a chilling moment, yet it’s difficult to separate from its deployment in the marketing for Eighth Grade, a film which, while also just as stylized, felt like a more emotionally sensitive take on similar ideas.

Despite not every joke landing, there’s a sense of consequences-free, playful fun that is carried throughout the evening’s journey. There are no villains here and, in keenly exploring how one’s assumptions rarely prove correct, those much-used high school stereotypes end up getting turned on their head in effective, if simplistic ways. It’s telling that the film’s best moments occur when the frenetic comedy gets dialed down and our leads are stuck in one place, either humorously bantering about or, ultimately, forced to confront their own insecurities. By the final scenes, it’s hard not to be wholly won over by their friendship and reflect on those in our own lives, as if we’ve been given a glimpse just how rewarding such a bond can be when built with such grace and support. It may begin with a scattered, cartoonish approach, but Booksmart eventually blooms into something entirely and beautifully its own.

Booksmart opens on May 24.