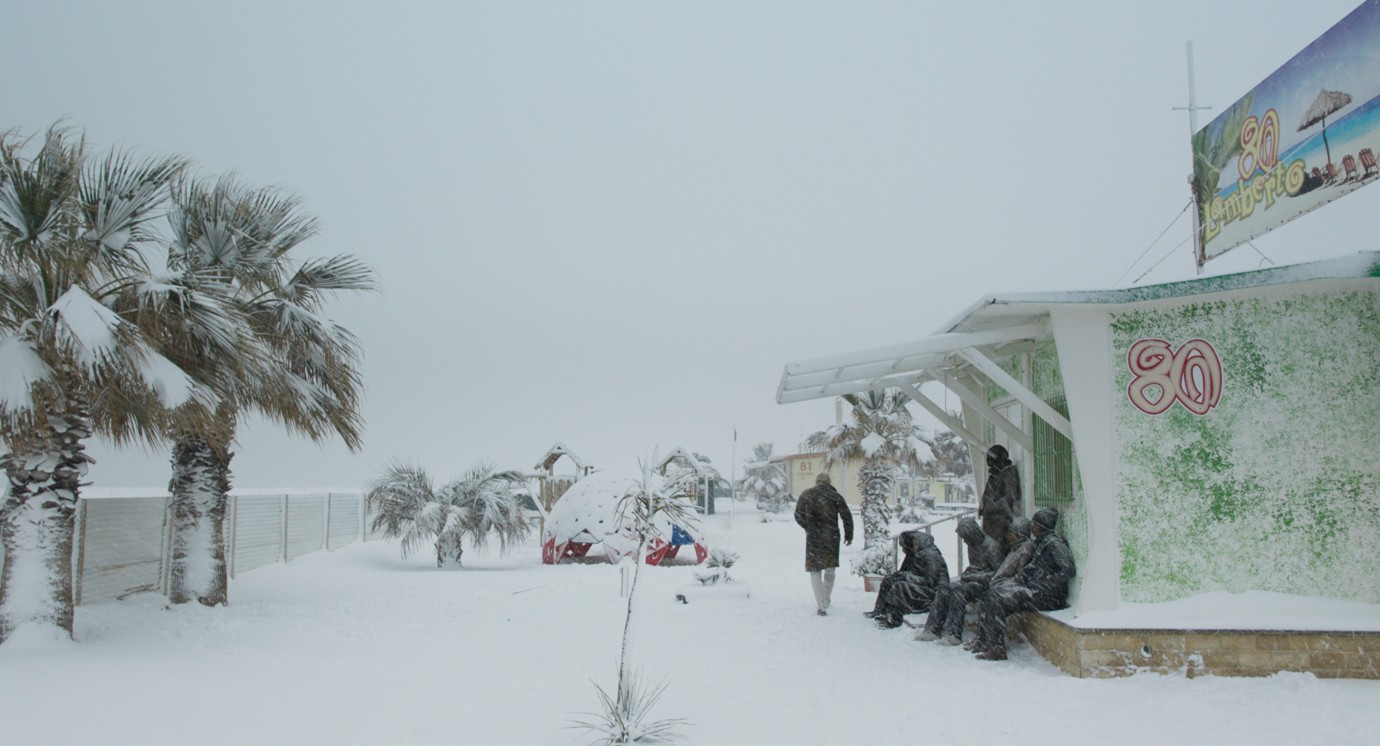 Anyone seeking a peek into Ulrich Seidl’s worldview–perhaps his soul–could do worse than Rimini, his first film since Safari in 2016 and first narrative feature in almost a decade. It swells with Seidl ephemera: hunting trophies, Austrian basements, and lovelorn holiday-makers of a certain age. And then there’s the mood. Consider a shot near the end of its first act: a ghostly, out-of-season water park looming over an out-of-season man; mist clouds so dense they hang over the park’s slides; and just to the right, still as statues, a group of hooded refugees.

Rimini, a dense and discomforting character study, stars an astonishing Michael Thomas (who appeared in Seidl’s Import/Export all those years ago, and more recently in Paradise: Hope) as Richie Bravo, a once-popular singer of German Schlager music (a derided and sentimental genre that came to fame in the postwar years), now making ends meet as a washed entertainer in holiday resorts where he serenades, occasionally seduces (for a little extra income) aging fans. Thomas’ Bravo, recalling both Mikey Saber and Mickey Rourke, has a protruding gut, slicked-back hair, an alcohol problem, and some deep-rooted mommy issues. The film is all his.

In tone and aesthetic, Rimini picks up where his earlier films left off (most notably the Paradise trilogy from 2012 and 2013), but it is a touch conventional by comparison. (It is also tellingly sentimental—the years do have a way of softening our sharper edges.) Seidl begins when Richie returns home for his mother’s funeral. Dad (Hans-Michael Rehberg, in his final role), a war veteran with dementia, is in a nursing home where he occasionally still sings his Nazi marching songs (the residues of Fascism, a key Seidl theme). Georg Friedrich—brilliant, if only onscreen briefly; though word has it that the director’s next film, Sparta, will tell his story—appears as his younger brother; in one of the best sequences, Thomas and Friedrich get drunk together and use the bottle of schnapps for shooting practice. It is at its best in these early exchanges, dangerous and unpredictable. Richie’s secondary source of income comes from seducing older women, mainly fans, who pay him for sex. One regular named Annie (Claudia Martini, who appeared in his Dog Days from 2001) sleeps with him while her elderly mother lies unwell in the next room. Oh my.

Yet there is perhaps no better director for finding a kind of sweet vulnerability in such moments. Seidl observes sex in his work with about as much eroticism as an anthropologist, full-frontal and explicit but not sans tenderness—his film neither judges nor pities Bravo’s lovers, and we need not look too closely to locate the man’s Freudian concerns. Filmed with typical surgical remove by Seidl regular Wolfgang Thaler, Rimini is awash with striking imagery (the trees wrapped in paper outside the funeral home floored me) as well as Seidl’s signature compositions: static and shot head on, constructed as one might a butterfly collection. The interiors are about as sterile as a hospital ward but give way to brightly lit stages for Bravo’s performances, which are remarkable and even hypnotic. (The film is at its least-comfortable when watching Bravo sway through his audience, eyeing up his next mark.) Only when Seidl introduces Bravo’s forgotten daughter (Tessa Göttlicher), who has come in search of compensation for the man’s many years of neglect, does his film slip toward convention—even if Seidl’s whacky denouement is anything but.

The outside world in Rimini seems as bleak and overcast as Bravo’s inner life. Seidl might be Austria’s artist in residence for this kind of utter loneliness; an affliction his films suggest can only be caused by some form of inherited shame. The off-season timing (it’s shot in the Northern Italian holiday town from which the film takes its name) allows no shortage of desolate landscapes where he leaves his downtrodden protagonist. Wandering from resort to resort in his long leather jacket, whipped by wind and rain, Bravo’s life of empty dive bars, sparsely attended performances, and the background noise of slot machines begins to acquire a certain awful glamour. I almost wanted to be there.

Rimini premiered at the 2022 Berlinale.