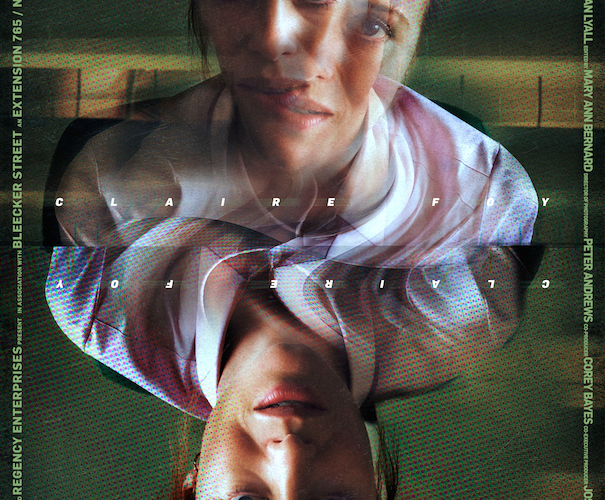 The term “post-prime Federer” has recently come into the sporting lexicon as a way to describe the great Swiss tennis star’s career in the years since his supposed peak ended in 2010; the rub here being that this unique entity has actually won more Grand Slam titles than Andy Murray, to take one example. Similar innocuous comparisons could soon be made for the prolificacy of “post-retirement Steven Soderbergh.” Indeed, it was never going to be easy for the director of Sex, Lies and Videotape to step away from the camera — his finger has always been too close to the pulse to ignore it, his inputs too wired to the cultural zeitgeist. Despite being shot months before the New York Times and New Yorker aired Weinstein’s dirty laundry, his latest effort, Unsane — which is essentially a b-movie in many respects — is arguably the first psychological horror of the #MeToo era.

It stars Claire Foy as the improbably named Sawyer Valentini, a woman living the young professional finance-job lifestyle: all pencil skirts, pre-packaged salads, and one-night stands. One such date ends up with a bit of heavy petting back in Sawyer’s apartment, but things go strangely awry. The following day, she goes to meet a counselor in a facility called Highland Creek (and if that name isn’t wrought with enough ironic tranquility for you, just wait till you meet Ms. Brighterhouse) to talk it over, but inadvertently commits herself to their psychiatric ward.

Soderbergh is no stranger to the shady dealings of massive corporations (Erin Brockovich, Side Effects), but we haven’t seen him this embittered in quite some time. In late 2016, BuzzFeed released an expose of UHS (the largest chain of psychiatric hospitals in the country) for — amongst other things — keeping patients longer than necessary in order to maximize profits. Unsane is a clear reaction to all that. Indeed, we quickly discover that the administrators in Highland Creek wish to keep Sawyer and her fellow patients in house until their respective insurance companies stop paying out. The single day that she accidentally, originally signs up for soon becomes a week-long stretch. A fellow inmate (SNL’s Jay Pharoah) estimates that just one in ten of their fellow patients have any real reason to be there.

Unfortunately for Sawyer, however, there are more worrying fish to fry. It becomes apparent early on that she has moved to the city not for a job opportunity but to escape a stalker. Things get shadier still when an orderly resembling the man in question shows up at the hospital to work the night shift. Is he really there or is the woman actually losing the plot? What first appeared to be a fun riff on One Flew Over the Cuckoo’s Nest soon transforms into something much darker.

It must be said, however, that the film is quick to point out that Sawyer is a total boss. In the opening minutes she shouts down a client on the phone and then scolds her colleague for presuming it was a man on the end of the line. She then rejects the offer of a five-star hotel convention getaway from her remarkably greasy employer. Her dealings with the less-desirable characters in Highland Creek will be no less assured. The intensity of the film rests on whether or not that resolve will hold out.

Shot in secret last summer using only an iPhone, this is Soderbergh at his most thrifty. The casting of Foy also seems shrewd considering that, in a mere matter of months, the world will see her not only as Lisbeth Salander in the new Stieg Larsson adaptation but also Neil Armstrong’s wife, Janet, in Damien Chazelle’s First Man. Soderbergh even calls in a cameo from a mega-star just to add a touch of class. The director claims he’ll never work with a studio again, and Unsane proves he’s not crazy for taking that path.

Unsane premiered at the Berlin International Film Festival and opens on March 23.