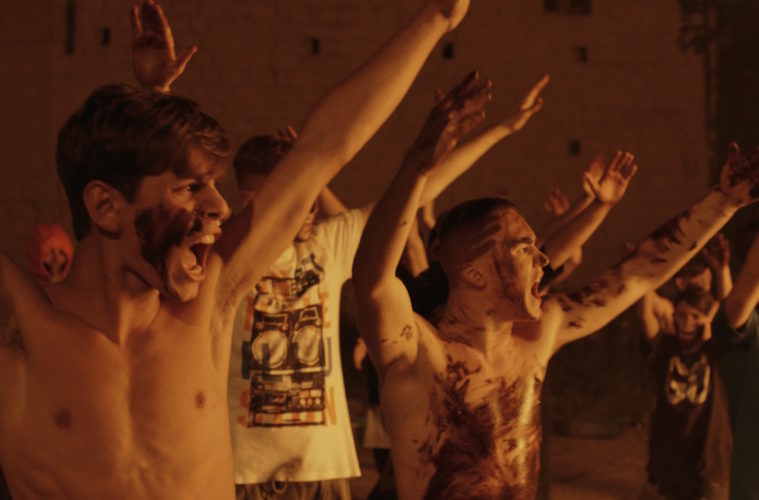 Berlin Review: ‘Piranhas’ is a Perceptive Yet Formulaic Immersion into the World of Neapolitan Teen Gangs

The kids roaming around the streets of Naples in Claudio Giovannesi’s Piranhas snort cocaine, hang out with hookers, and fire assault weapons. They are the barely teenage mobsters the city’s Camorra clans have recruited with promises of quick cash and opulent mansions, their interiors caught somewhere between the belittling sumptuousness of Xanadu and the revolting kitsch of a Trump Tower. Stunted adolescents propelled into adulthood at the speed of light, they inhabit a liminal world where ultra-violence teems with childlike wonder, the loss of innocence immortalized one gun-wielding selfie at a time.

Based on Naples-born Roberto Saviano’s best-selling novel La Paranza Dei Bambini (literally, the Children’s Parade) Giovannesi’s Piranhas offers a far tamer ethnography of the Neapolitan underworld than the disturbing sociological study Matteo Garrone’s 2008 Gomorrah had pierced out of Saviano’s breakthrough literary debut of the same name. Anyone approaching Giovannesi’s fourth feature hoping to find the same fast-paced, violence-fueled narrative that had anchored Gomorrah should be warned: the hyper-violence the kids’ environment is mired in is only alluded to, its bloody outbursts sporadic or truncated altogether, and the rise-and-fall-from-grace of Piranhas’ protagonist, 15-year-old Nicola (Francesco di Napoli) is formulaic pastiche of scenes and twists seen countless times before.

Still, there is something so perceptive in the way Giovannesi zeroes in on these embryonic mafia bosses–especially as Piranhas ventures into the kids’ relationship with the adult world around them–which makes for an enjoyable if patchy 105-minute ride. Nicola’s entrance in the Neapolitan underworld starts with his mother’s laundromat. Humiliated by a mafia clan that’s been extorting money from the business (and the neighborhood at large), the boy rallies fellow teen thugs to the paean “let’s claim our turf back,” backstabs the adults he’d sworn loyalty to, and starts his ascent as an underage boss. But though the kid’s struggle may be one of a teenager over and against a grownups’ world, his cosmogony is unmistakably influenced by the adults he de-throws along the way.

Nicola and his mates venture into the mansions of the Neapolitan underworld with the awe-struck expression you’d enter El Dorado with. In an endearing early segment, the boy is ushered into the palazzo of a late mafia boss who used to control the neighborhood, snaps pictures of the man’s gold-plated room, only to then report the adventure to his little brother with the wide-eyed wonder of Nick Carraway after his first party at Gatsby’s. Crucially, to become a man is to imitate the indomitable adult bosses that fought over the same turf for years on end. The masculinities embraced by Nicola’s and his pals pivot on savage strength and the ability to use guns, which leads the Piranhas to revere weapons as cultural signifiers–the same kind of commodity fetishism they reserve for luxury watches and clothing brands.

Didascalic as it may be in its rise-and-fall scaffolding, it is in its forays into the kid’s self-representations of their unhinged lifestyles that Piranhas crafts some of its best material. Being able to afford entry into 500-a-table nightclubs, paying for hookers, snorting coke, and slaughtering rival gang members are all crucial parts of the hyper-violent notions of manhood the kids happily embrace along the way. But their ascent to the rank of mafia soldiers only comes into being as the thrills are portrayed on smartphones, and shared on social media. In the hyper-connected world Giovannesi’s Piranhas inhabit, embracing a toxic masculinity anchored on violence and bloodshed is indissolubly bound to a need to advertise it and make it public. The countless gun-wielding selfies Nicola and his acolytes snap along the way are not (just) narcissistic and impromptu narrative breaks–they respond to a specific function, that of reasserting their identities vis-à-vis peers and potential enemies.

Left to their own devices, the boys seesaw between war dances that echo the raw physicality of Claire Denis’s Beau Travail–bodies grinding against one another in topless choreographies–and more intimate exchanges, where the ruthless environment makes room for sporadic intramural effusions. Perceptively, Giovannesi allows for glimpses of homoerotic tension to erupt within the group, with Nicola and his gang mates kissing each other during moments of unbridled hubris for the newly acquired power and wealth. Far from being hashed out as exceptions to some codes or conducts, Giovannesi crafts these exchanges as playful acts the kids engage in without ever chastising each other for. Chuckles abound, and no judgments are passed, as Piranhas seems to veer, if only for a flickering moment, into a surprising post-binary utopia.

But the syncretism is short-lived. The sporadic moments of same-sex tension between Nicola and fellow teenage mobsters are just as tenuous as their inter-gang alliances. This is what Piranhas so accurately understands: whatever the homoerotic exchanges in between the young thugs, a hyper-violent environment like the one they’re mired in can only churn out hyper-violent, heteronormative masculinities. Nicola and his pals may well be set to do away with the predatory adult world that’s vexed their turf–but in their struggle to eradicate it, they only reproduce its barbarities to an ever-more visceral extent.

Piranhas premiered at the Berlin Film Festival and opens on August 2.