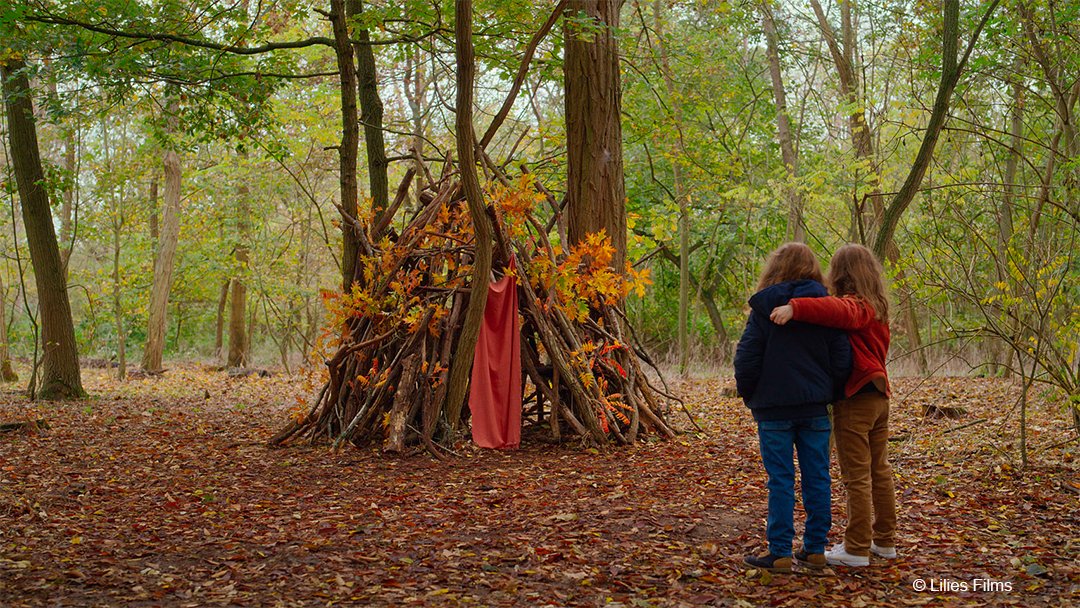 After the ambitious and wildly popular Portrait of a Lady on Fire shot Céline Sciamma into the arthouse stratosphere, she has returned with her fifth feature, Petite Maman, a warm and contained film whose scale is more akin to Tomboy. The mighty hype from Sciamma fans anticipating the film’s Berlinale premiere may be too much to bear for this delicate, low-key film. Of course it’s as impeccably directed and carefully structured as we’ve come to expect from Sciamma. But it’s more of a slow simmer than Portrait’s fiery blaze. Beware instantaneous hot takes: this is a modest work, one to sit with and chew over, one to look back on fondly after letting it percolate.

With Petite Maman, Sciamma returns to the topic of her first three features—childhood—now with one eye on the adult characters. We meet eight-year-old Nelly (Joséphine Sanz) in the hospital, one by one entering the rooms of the old folks who live there and saying goodbye. We soon realize Nelly’s grandmother has just died; Nelly’s many goodbyes tell us it’s been anticipated, since she had the time to befriend so many of her grandma’s neighbors. The next character we meet is Marion (Nina Meurisse), Nelly’s mother, who is warm toward Nelly but seems distant. She’s grieving but, as we later learn, her sadness predates the loss of her mother.

Sciamma skillfully straddles the worlds of children and adults, keeping us within Nelly’s naive point of view while permitting glimpses into Marion’s headspace. When we first meet Marion, she sits on a stool in her mother’s empty hospital room, staring out of the window. Her face isn’t visible; we watch her from behind, from Nelly’s perspective. But Marion’s slumped posture and stillness telegraph the melancholy expression hidden from Nelly. In the next scene, she drives Nelly to the grandmother’s house to sort through old things. Nelly is in the backseat, Marion driving in the front, so at first we only get a sliver of Marion’s contemplative expression, glimpsed through the rearview mirror. Yet while communicating this distance, Sciamma still manages to show us the warmth and intimacy between mother and daughter. Nelly reaches her arm forward to the front car seat to feed her mother cheese puffs that Marion, smiling and laughing to herself, willingly accepts. We sense this sweet and amusing ritual is something they’ve done hundreds of times before.

Unexpectedly for Sciamma, it takes a supernatural turn. When Nelly and Marion arrive at Nelly’s grandmother’s house, under cover of darkness, they navigate the hallways with flashlights illuminating pieces of furniture covered in large white blankets. It’s a haunting sight, though Petite Maman soon reveals itself not as a ghost film, but time travel (albeit disinterested in the actual mechanisms of time travel). Marion, overwhelmed by grief, flees in the night, leaving Nelly alone with her father (Stéphane Varupenne), who joined the pair the previous day. The next morning, Nelly wanders the woods outside, a gorgeous location rich with autumnal colours that cinematographer Claire Mathon makes pop. Nelly stumbles across another girl her age (Gabrielle Sanz, Joséphine’s real-life twin). It’s not long before the girl introduces herself as Marion and Nelly realizes she’s talking to a past version of her own mother.

Is young Marion a vision? A daydream? An unwitting time traveler? Or is Nelly the one who has travelled in time? Sciamma is uninterested in answering any of these questions, preferring to get right to the heart of the matter. She uses fantasy to explore human relationships in a way that realism wouldn’t allow, turning Nelly’s explorations of her mother’s past into literal, physical interactions between the two girls. Early in the film, the older Marion shows her daughter her old school textbooks from when she was a kid, sparking Nelly’s imagination about what her mother was like when she was her age. By befriending the younger Marion, she is able to find out.

If Tomboy hadn’t proved it already, Petite Maman solidifies Sciamma as one of the best directors of child actors, drawing soulful but not-too-precocious performances from the Sanz sisters, whose friendship is a delight to watch unfold. Nelly is interesting to observe because she comes across as a preternaturally smart kid—more than good at spelling and crosswords, she’s watchful, thoughtful, and a deep thinker. But never overly articulate in a way that seems unrealistic, her intelligence communicated more through curious glances than erudite conversation. Both Sanz sisters are wonderfully natural on camera, and their closeness is evident in their incredibly sweet scenes of bonding, whether they’re building a fort out of sticks or giggling while making pancake batter.

The film inches towards its emotional climax when Nelly reveals to young Marion that she is her daughter, and the two grapple with what that means together. Once again, Sciamma doesn’t bog herself down with semantics; perhaps because she’s so young, and thus willing to believe in magic, Marion accepts what Nelly tells her without much argument. With only a day left to spend together—Nelly must return home now that her grandmother’s possessions are in order—they ask each other questions about the past and the future. Besides that, they have fun, trying to enjoy their brief time before life moves on and pushes them apart. There’s a beautiful scene set on young Marion’s birthday wherein Nelly and Marion’s mother bring Marion a cake and sing her happy birthday. While beaming and gazing into the warm candlelight, Marion asks them to sing the song one more time, willing this blissful moment to last just a few seconds longer.

Petite Maman is, amongst other things, a beautiful ode to mother-daughter love and a melancholy acknowledgment of the distance that always exists in that relationship, when both parties are separated by age and responsibility. For Nelly, that love morphs when, for a brief time, that distance evaporates and she comes to recognize her mother as a human being separate from herself. It’s a restrained film, filled with lovely but low-key moments, that holds back until a key musical scene (a Sciamma trademark) near the end that hits with an emotional wallop. In a filmography full of brief or missed connections, Sciamma delivers one of her warmest, most hopeful endings to date, though not without ambiguities. The older Marion’s sadness is still present, and who knows what the future holds for little Nelly. But perhaps Nelly truly, finally understands her mother; not just as mom, who’s there to serve Nelly’s own needs and desires, but as Marion.

Petite Maman premiered at Berlin International Film Festival and will be released by NEON.