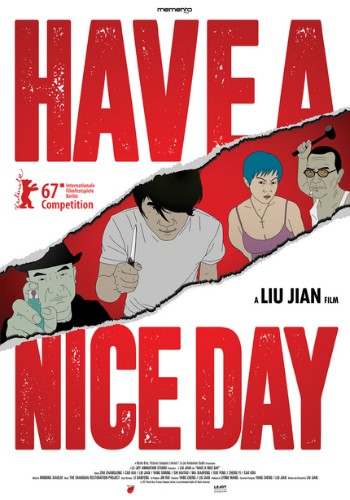 Berlin Review: ‘Have a Nice Day’ is a Tarantino-Esque Slice of Contemporary Greed and Crime

Liu Jian’s Have a Nice Day won’t be mistaken for anything less than an utterly contemporary piece of Chinese filmmaking but, as the title might tell you, it’s also a film seeped in 1990s American pop culture. Channeling the Coens, Quentin Tarantino, and Cormac McCarthy, Jian’s film has the swagger, dedication to homage, and effortless cool of that decade’s cinema but with plenty of things to say about present-day China. The story revolves around a very McCarthy-esque setup: a bag of money has been stolen for decent reasons by an apparently otherwise decent guy and — as tend to be the case in McCarthy’s novels — a selection of somewhat less-decent people (each with their own motive) end up hunting him down.

We’re in a city in Southern China, in a world beautifully animated with the crisp, still detail of a graphic novel. Xiao Zhang (voiced by Zhu Changlong) is a young man in love and, as it turns out, his lover needs some cash. She’s had plastic surgery done but the operation was botched, so Zhang decides to steal one million yuan from the owner of a local construction firm. The local thugs are soon on his tail, however, with mob boss Uncle Liu sending a fixer called Thin Skin to track him down. “Skinny” is decked out in a black duffle coat, a trilby and trainers, sipping on the dregs of a large soda. He’s the only character in the film that doesn’t smoke. Anton Chigurh, eat your heart out.

Presented in Tarantino’s portmanteau style, Jian populates his world with a fine selection of vibrant and interesting characters. First to sniff the honey pot are a tech head named Yellow Eye (Cao Kou) and his girlfriend, who track Zhang to an internet café and lift the cash. A friend of Zhang’s girlfriend soon gets the scent as well and, along with her motorcycle-riding boyfriend, decides to weigh in. Greed might not be the only driving force in Have a Nice Day, but it’s certainly the most seductive and palpable.

It’s the second animated feature from Jian and, even at first glance, there’s no doubting he’s a political filmmaker at heart. In pseudo Tarantino fashion, the mobsters talk about everyday stuff in the moments in between the madness. We hear them shoot the shit about getting out of town; talk about moguls like Steve Jobs, Bill Gates, and Mark Zuckerberg; and how best to make a quick buck with a start-up. The American dream has diluted the landscape in Jian’s China. The irony of seeing Mao Zedong’s face on the banknotes that fill the bag is certainly not lost.

There’s a lot in Jian’s script to suggest a frustration with all the greed, cynicism, and shady dealings that have come to define certain darker corners of the director’s native land. The film might have been weighed down by all this were it not for that fact the Jian’s clearly a cinephile, and is just as interested with fleshing out his characters as he is with social commentary. Indeed, we’re soon reminded of just how funny and charismatic philosophizing mobsters have always have been in the movies. And not satisfied with mere snappy dialogue, we’re also treated to plenty of slick and nicely choreographed action. Yellow Eye has some of the tech you might expect to see in a street-level superhero film, complete with a very Chigurh-esque killing machine and a pair of so-called “invincible x-ray glasses.” These gadgets almost place the film in the not so distant future bracket, but Jian is keen to remind us that we’re still in the here and now.

It might not quite end on a satisfying note, but Have a Nice Day remains an urgent, thoroughly entertaining, and inventive piece of filmmaking, and one can only hope that it gets the release it deserves after doing the festival rounds. At one point we see Thin Skin behind the wheel of a car. He pops on the radio and we hear a snippet of one of Trump’s many post-election moments of vitriol. The ice cold killer just sighs and changes the channel. The cinema of animation is seldom quite so bad-ass.

Have a Nice Day premiered at Berlin Film Festival and opens on January 26, 2018.